Chances are, you're here because this card interests you, but you're not sure if you want to spend the time and effort at launch to either snipe the card or drop as many coins into buying him as he's worth (an 81 for 18k at launch!?). I get it, because I felt the same way and said that if he wasn't worth it, I'd just eat the coin tax. Let me tell you though, he's ABSOLUTELY worth the hassle. The last few fifas, I've been a division 4 mainstay in rivals and a consistent gold 2 finisher for WL (when I played). Rodrigo played twelve games for me. I went 4-0-1 in my five placement games and ended up in division three. Eventually, I did get promoted to division 2, and Rodrigo was a large part of that. He played as a lone striker for me in a 4-3-3(2) surrounded by pacey wingers. Here's where we get into the details. His record for the twelve games? 38 goals and 5 assists. I'm in the highest division of fut I've ever been in since fut 14, and this card's a big reason.

Pace: You absolutely are thinking about this card because of the pace. Pacey attackers this early in the game when your opponent's defenders are all around 70 pace are huge for getting goalscoring opportunities. Pace is relevant again this year, and Rodrigo is rapid. If you time the pass right, he can get away from centrebacks and avoid chasedowns from quicker fullbacks. If you're sweaty (everyone is when they need to), he definitely has the speed to push for a kickoff goal.

Shooting: Shooting feels a decent bit easier this year, not gonna lie. The shot power feels like a lie, because on either foot his shot 9/10 times will be on frame and hit with power. 38 goals in 12 games was a really great record for me, with the only "outlier" game being one he grabbed seven goals in one of the placement games. Even if you take away that outlier game, I don't remember a game where he had less than two goals at the very minimum.

Dribbling: I'm nowhere near good enough to get the most out of players for dribbling. I think this felt fine. He was able to slow to a halt and take the steps necessary in the box to just get enough space to get a shot off, so that's good enough for me.

Physical: The 75 stamina wasn't a problem at all. He was always ready for a run in the dying minutes of the game. No fitness cards this year is great, and definitely shifts the stamina threshold most of us want in attackers to a lower number. He's also 6'0 and decent at jumping, although I do get annoyed when he's my front post man on corners.

Team building: Premier League striker and Spanish as well. He helps link my PL-La Liga hybrid perfectly, which I'm sure is a popular combo for many people.

I'm not gonna talk about his strength stat. His balance and strength felt fine, but he's obviously not gonna shove off the tanky centrebacks. The biggest issue this card potentially faces is: sustainability.

I'm writing this review around 24 hours before "early release" on October 6th for those who pre-ordered the higher editions. This means my games during EA Play 10 hours might feel like a different game to the current build. The one thing I've felt during this time of no patch is that weak foot feels almost irrelevant. Rodrigo was smashing with power on both his left AND right foot, despite the right foot being 3*. I know, 3* isn't bad. However, it also shouldn't be as guaranteed as it seems to be. I don't know if this feeling will survive inevitable patches, but I do know I definitely benefited from it. However, even if EA patch weak foot and buff the keepers a bit, I don't think that will hurt the card too much in the early stages, but I do understand that for many competitive players, anything below 4* weak foot has traditionally been a deal breaker.

The other major con is his current accessibility. I'd recommend trying to get him asap, because if you're gonna try and wait for more to flood the market, understand that the chances he gets a OTW are high, so the basic gold card will be hard to get for the first few weeks of the game. I stand by that he was worth the time invested into sniping him, but it's a new FIFA. Chances are you want to be playing games and learning what works and what doesn't, NOT trying to snipe a player on the menus or companion apps. 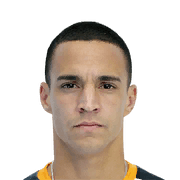 Sniped him when he was extinct at 18k, decided to try him out alongside Jesus as a ST.Absolute class player - his pace is electric, shot power feels like 99 with his left, his right foot doesn't feel like a 3*, more like a 4*, doesn't really lose the ball that much. Absolute steal for 18k if you can get your hands on him. (This is with a basic, with a finisher or hunter he would be overpowered)
Read full review

a bargain for coins

i packed this guy early on and my god did he impress, his pace literally ends defenders. he will easily pull away from defenders. and his shot does not let him down. i have a team worth close to 700k and even now i bring him of the bench around the 65th min. with both a prem based and spanish nationality he should be easy to tie in with most teams.
Read full review

overall really good starter play. Played him as a lone striker in a 4-2-3-1, and he was really god. Great finishing, nice pace, and really good while on the ball. Used him as a runner, get in behind, and also as a dribbler in the box.
Read full review
0
/600
Update my avatar Dos and don'ts
Top Rated
New
Controversial
Show comments