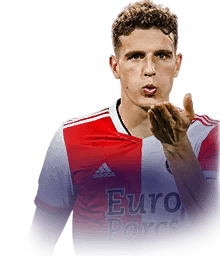 4
Sub out
Upcoming Matches
P. Chemistry
Squad chemistry
ST
82
RW
81
LW
81
CF
84
RF
84
LF
84
CAM
84
CM
85
RM
82
LM
82
CDM
80
CB
75
LB
77
LWB
78
RB
77
RWB
78
Reset
Basic
Sniper
Finisher
Deadeye
Marksman
Hawk
Artist
Architect
Powerhouse
Maestro
Engine
Sentinel
Guardian
Gladiator
Backbone
Anchor
Hunter
Catalyst
Shadow
Comments
Reviews
0
/600
Click here to verify your account in order to comment Update my avatar Dos and don'ts
Top Rated
New
Controversial
Show comments
Top Reviews
Only logged in users can submit a review
A review must be written in English
At least 200 characters are required.
Compare this player to other similar players you have used(optional).
If you import your club to FUTBIN or send us an image with the player data(fill the form below) your review will be marked as verified.
Include what you liked about the player in the pros area and what you disliked about the player in the cons area.
Your review will be manually checked during the next 24 hours.
Chem Style Used
Formations
Position
Rate Player Base Stats (1-10)
Pace
5
Shooting
5
Passing
5
Dribbling
5
Defending
5
Physicality
5
Most Used In:
Submit Review

Played as a RCM in 41212 narrow which is used in elite rivals games. Other reviewers not got a clue. Solid CM who can be relied on to finish, play good passes and make big tackles. Very rarely bullied off the ball and can bulldoze through players. Not going to beat multiple players with quick dribbling but dribbling is still good enough to go past a player when the opportunity arises. Great finisher if you can get the opportunity for him to hit it with his right or cross it in for a header. If running a Dutch team definitely pick him up.

I tried so hard to like this card, especially because it was so cheap. But this card is just so bad. He feels so slow to the point where it's unusable. Don't let the pace stat deceive you, he runs like he's constantly in 4 feet of mud. I've played many games with him, and in almost all of the games, I completely forgot he was on the team. He's a decoration on the pitch, if that. I always catch him flirting with the turf when my opponent has a counterattack, and my god his hair is so blonde to the point it's unhealthy for the eyes. If you like wasting coins, go and complete this fraud. I like the concept of including more leagues, but this guy just ain't it.

Slow, Way too blonde, Disappears in crucial moments of the game, Can't pass, Can't shoot for the life of him