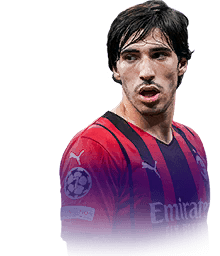 0
Red
Upcoming Matches
P. Chemistry
Squad chemistry
ST
79
RW
81
LW
81
CF
81
RF
81
LF
81
CAM
83
CM
84
RM
83
LM
83
CDM
84
CB
82
LB
83
LWB
83
RB
83
RWB
83
Reset
Basic
Sniper
Finisher
Deadeye
Marksman
Hawk
Artist
Architect
Powerhouse
Maestro
Engine
Sentinel
Guardian
Gladiator
Backbone
Anchor
Hunter
Catalyst
Shadow
Comments
Reviews
0
/600
Click here to verify your account in order to comment Update my avatar Dos and don'ts
Top Rated
New
Controversial
Show comments
Top Reviews
Only logged in users can submit a review
A review must be written in English
At least 200 characters are required.
Compare this player to other similar players you have used(optional).
If you import your club to FUTBIN or send us an image with the player data(fill the form below) your review will be marked as verified.
Include what you liked about the player in the pros area and what you disliked about the player in the cons area.
Your review will be manually checked during the next 24 hours.
Chem Style Used
Formations
Position
Rate Player Base Stats (1-10)
Pace
5
Shooting
5
Passing
5
Dribbling
5
Defending
5
Physicality
5
Most Used In:
Submit Review

5.0
the next prilo
50 users liked this review

Bought tonali as soon as he came out as i loved his futties/player moments card last year and he did not disappoint.

He outperformed both kessi and llorente, and for 130-140k, hes prolly the best cm/dm u can buy

Shooting- 8/10: I have no idea why but this man channeled his inner elon musk because he sent fking rockets with his right foot. All 8 goals were powershots from the edge of the box/slightly inside of the box. despite the 76 shooting his shots felt better than kdbs. never expected for his shooting to be that good.

Passing 8/10: the 86 passing stat shows in game, nothing too special tho

Dribbling 7/10: he felt quite responsive but with him being 181cm + his body type; he wasnt like IF barella or anything but the dribbling was sufficnet for his position

Defending 9/10: absolute monster, chased everyone down and regained possession more times than i can count

Physicality 8/10: he felt fairly strong and 83 stamina is decent, but could be better imo.

His League SBC card from fifa 20 was my favourite CM for the whole year. Its looking very likely that this will be a repeat again because my god does this card do it all. I have him on stay forward - get into the box, with a Marksman chem style, to boost his weakest stats and make him more well rounded. With his workrates, the instructions I have on him mean he essentially plays as a perfect box to box midfielder. I have him playing on the right side of a 4-3-3.

Shooting - he may as well be American, because his right foot on the 18 yard line is more lethal than a redneck with a double barrel shotgun.

Physical - he can hold up the ball well, and shrug off the majority of defenders and midfielders currently meta.

Unbelievably cheap for how good he is. If you put his stats on an icon card or a better league like BPL/La Liga he would be going for upwards of 300k. I mean look at Fred.

The one and only con I have with him, is he occasionally feels a bit clunky when making quick turns, but lets be honest that's not what you bought him for.

WI packed this guy out of a 100k pack in one of the last hours that this guy was availible. He fitted perfectly in my team alongside Barella at the CDM position. I think it's one of the best DM's/CM's in the game so far. He is really fast and on the ball he's really strong. Like 95 % of his passes are good and his shooting is just very decent too. But the best thing is his defending. He's a bit glitchy I think, because he wins the ball literally every time. Even when I press standing tackle the wrong time he somehow manages to get the ball. I used him in div 4 with a backbone (think that's the best chem style bc it makes his defensive and physical stats better and also his passing) and he did a great job.