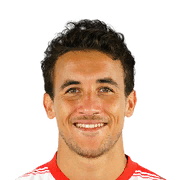 Going into the Black Friday Promo I was looking to go full untradeable and this Luis Milla Objective Card slotted right into my team. For reference, I replaced IF Barella for Milla at RCM in a 4-1-2-1-2 (2).

Wow, did this card surprise me. He's one of the best CMs I've used this year. I run Rulebreaker Suarez at LCM (trust me this is the way) so having a more defensive RCM with H/H (something not many CMs have this year) who also had the capability to go forward at times was crucial to the balance of my team. He helped me clutch up Rank 1 this weekend by scoring 4 goals in my final game so I felt entitled to write this short review.

I've only used Milla in FUT Champs Playoffs and Finals, but I'm confident he will be able to compete in high-level divisions.

Milla has mostly played a more defensive box-to-box CM for me with sometimes moving into CDM.

Also, this objective took be about 3-4 hours so I think it's definitely worth your time completing it.

For those who care, I'm a rank 1/elite division player.

Pace 8.5/10 - He feels faster in-game than his pace suggests because he has higher acceleration than sprint speed. I think running him without a pace-related chem style is possible, but I would recommend an engine or an anchor. I also think you can use a hunter or a shadow on him as well depending on the role you're looking for.

Shooting 6/10 - I think Milla's shooting is ok. He has 71 finishing with 80 shot power so he isn't the most elite finisher, but depending on the quality of chances you create he should be able to put a solid amount of them away, however, he does have occasional howler in him. If he's going to end up on the end of a lot of your chances then I would boost his shooting. Also haven't really tested his long shots or finesse shot trait too much, but again with the right chem style I think he can bang them in from range

Passing 8/10 - Has good short passing and didn't mess up a large number of simple passes. Long passing is also solid as well.

Dribbing 8/10 - After using IF Barella I knew Milla was going to be a downgrade on the dribbling end, but he actually surprised me. Definitely felt better on the ball than expected and because of a combination of his lean body type + engine chem style boost, he was able to dribble in tight situations.

Defending 9.5/10 - His defensive stats are way better than on the face of card b/c of low heading acc at 55. He is exceptional at every other defensive stat and it 100% translates in-game. He won me the ball back so many times in the midfield this weekend and saved me a handful of times on defense

Physical 9/10 - Good stamina, will last the whole game for you. He felt stronger than 80 strength, even with his body type.

Weak foot - I thought his weak foot performed better than 3*, however, it potentially can become an issue. Beyond that Luis Milla is an incredible card.

this objective is very good, put him in my team over tonali and he is not that much different to him only difference is the work rates, all in all i think the objective is worth your time

for background: Div 2 (4 in new season)/9/10 win player on wl. What can I say that hasnt been said. Has everything for a cdm/cm minus the wf. cheeky finesse shot trait too, h/h and 96 stam.