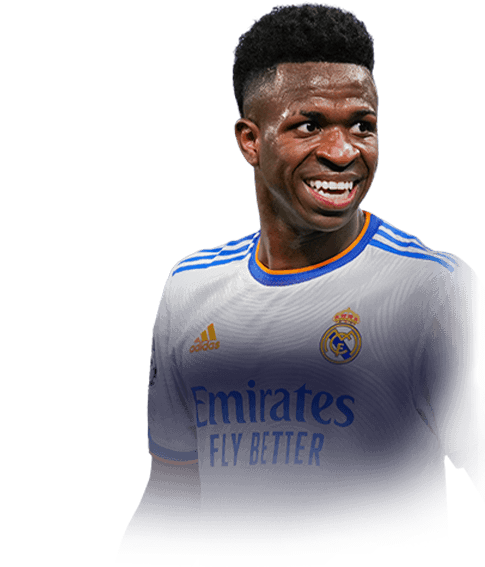 His real-life stats are currently 0 goals and 1 assists in 1 matches in domestic competition. He also received 0 yellow cards and 0 red cards.

What a year this lad is having for himself at Real Madrid and it would appear that he is only getting started.  Vinícius Júnior has been a man on fire for some time now and the special cards have been simply rolling in.  There is a phenomenon in FUT that can happen with cards of this nature, or at least in my experience, where the subtle differences in statistics make it hard to really notice any improvements in the card.  But not with Vini… I have used every single version of this card in FIFA 22 and I can tell you without hesitation that each and every time there have been notable improvements.  Even the +1 boost to the TOTGS 86 felt like a step up from the SIF 85 in some of the key areas of FUT performance.  The application of the DEADEYE chemistry style turned an already scary looking card into the stuff of nightmares… allowing Vinícius to flourish as the primary striker in my 4-2-3-1 formation, while at the same time providing the quality that saw the Brazilian line up at CAM, RAM and even LAM throughout the weekend.  Regardless of where he played, Vinícius Júnior was the touch of class all weekend long in the following squad: 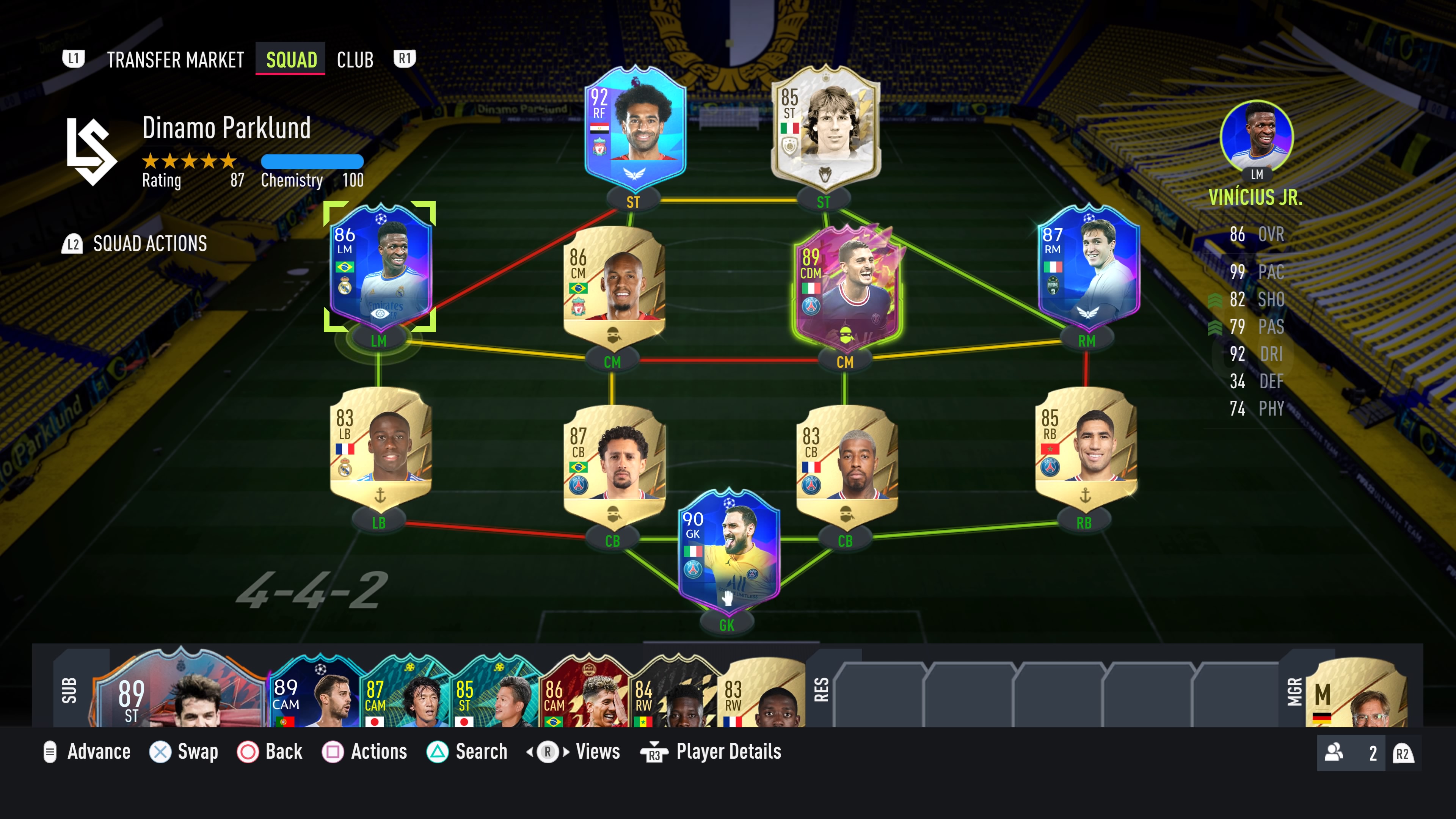 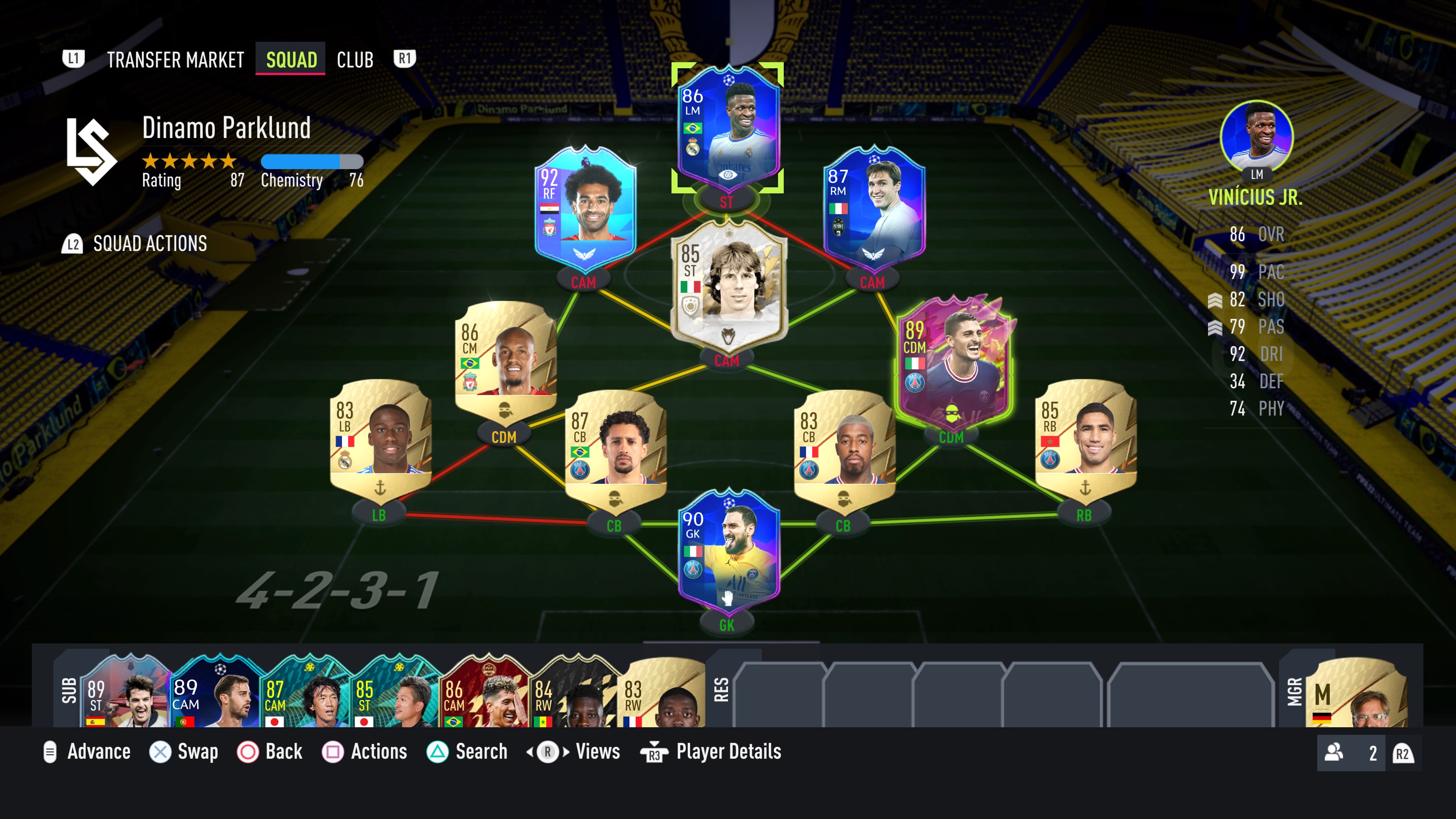 Crazy. Magnifique. Superb. I could go on and on about the weekend I had with this card.  Honestly, the 16 goals and 7 assists in 15 matches tells a very limited story about what this card can do.  Had the Zola experiment worked out better (I seriously was not a fan) and Vinícius been able to play entire matches at striker I have no doubt he would have set a new Weekend League goal record for my reviews.  The amount of weapons at your disposal to hurt opponents with this card feels like a cheat code and much like the Brazilians real life season, Vini always found the key moments in matches to be a gamechanger.

Between Vinícius, Salah & Chiesa it was a pace merchants dream this weekend as my counter attacks broke away with lethal pace.  The perfect base statistics of 99 ACCELERATION and 99 SPRINT SPEED not only feel accurate in game… they also allow for chemistry styles such as a DEADEYE or MARKSMAN that provide noticeable improvements to other key offensive areas.  In the end, I opted more for a passing boost based on a lack of linkup ability in recent reviews, but whatever your choice, it will be backed by some serious quickness and top end speed.  This card feels like a 176cm | 5’9 card in pace and movement, yet provides a sneaky strong 70 STRENGTH that you might associate with bigger strikers.

I normally don’t like to say “you have to watch the video” … in fact I think the closest I have come to that is suggesting you watch a clip or two… but this video has some of the best goals I have scored this FIFA and all of them are at the feet of Vini. The left stick dribbling is a dream as the 99 AGILITY feels like it has broken the barrier of 99 into something beyond what is possible… while the 86 BALANCE might as well be 99 as well.  This card is responsive, quick, elusive and as I previously stated even boasts some hidden strength that creates added difficulty to dispossess.

Yet, all of that would be useless if Vinícius couldn’t finish… and I am happy to report that he did so in a relentless and ruthless fashion.  The 4 STAR WEAK FOOT feels undersold as I didn’t notice the slightest difference on either foot throughout the review.  The 99 SHOT POWER is much like Chiesa in terms of leaving keepers flat footed and praying the ball misses the goal… while the 91 FINISHING was just about flawless (especially in the box) with only a few frustrating misses across the review.  The 99 POSITIONING might even be the best of the lot as Vinícius made some impressive runs in any of the positions I played him.

I have used a lot of the players in the 500k to 700k price range in FIFA 22… and so far there is not one that I would take over Vini if given the opportunity for a free addition to the squad.  If I had to buy them with my own coins I might just lean in the direction of IF 90 Sadio Mane and us the extra 100k to strengthen other areas, but it would be difficult knowing that I am leaving out Vinícius who could take over any match in the blink of an eye.

If I had to title this review I would call it…  Vinícius Júnior: Even the Passing Was Good! … Finally, a card that has all the abilities on the ball and can move it on to teammates as well.  The passing was seriously put to the test as I dropped Vini back into the CAM position in matches and I can say he “passed with flying colors”.  Could it have been a little sharper? Sure. But on the whole, I had zero complaints.

By now the question should be why only a 9.5/10 if this card was perfect… and that is of course the issue… it wasn’t.  While the video boasts a very nice finesse shot that obliterated the crossbar on the way in, in general, I felt the 85 LONG SHOTS to be a little “short” during the review.  The 90 STAMINA does not always provide the legs to produce sustained quality when moved to the CAM/RAM/LAM position across 90 minutes.  And of course, the 70 STRENGTH, which does feel solid, is still not the same as other options that boast higher statistics.

Close.  That would be my reaction to a perfect review for this card.  If we still did more intricate ratings this card has a 9.7/10 written all over it.  The scary thing is that at the rate  Vinícius is going, we are going to see some unplayable cards from this lad in the very near future.  In terms of right now… I can’t do any more than writing the review, show you the video, and strongly suggest you find a way to get this card into your squad.  I realize for many FUT Managers that this is the type of card that will involve serious coin saving, liquidating squads or tedious consumable selling … and so I want to be sure that the card would seriously change squads for the better.  In this case, I can’t recommend the Brazilian more.  The card has serious quality, can play anywhere in attack and is seriously a fun time to operate.  Hoping you are safe and well.  Cheers for reading. 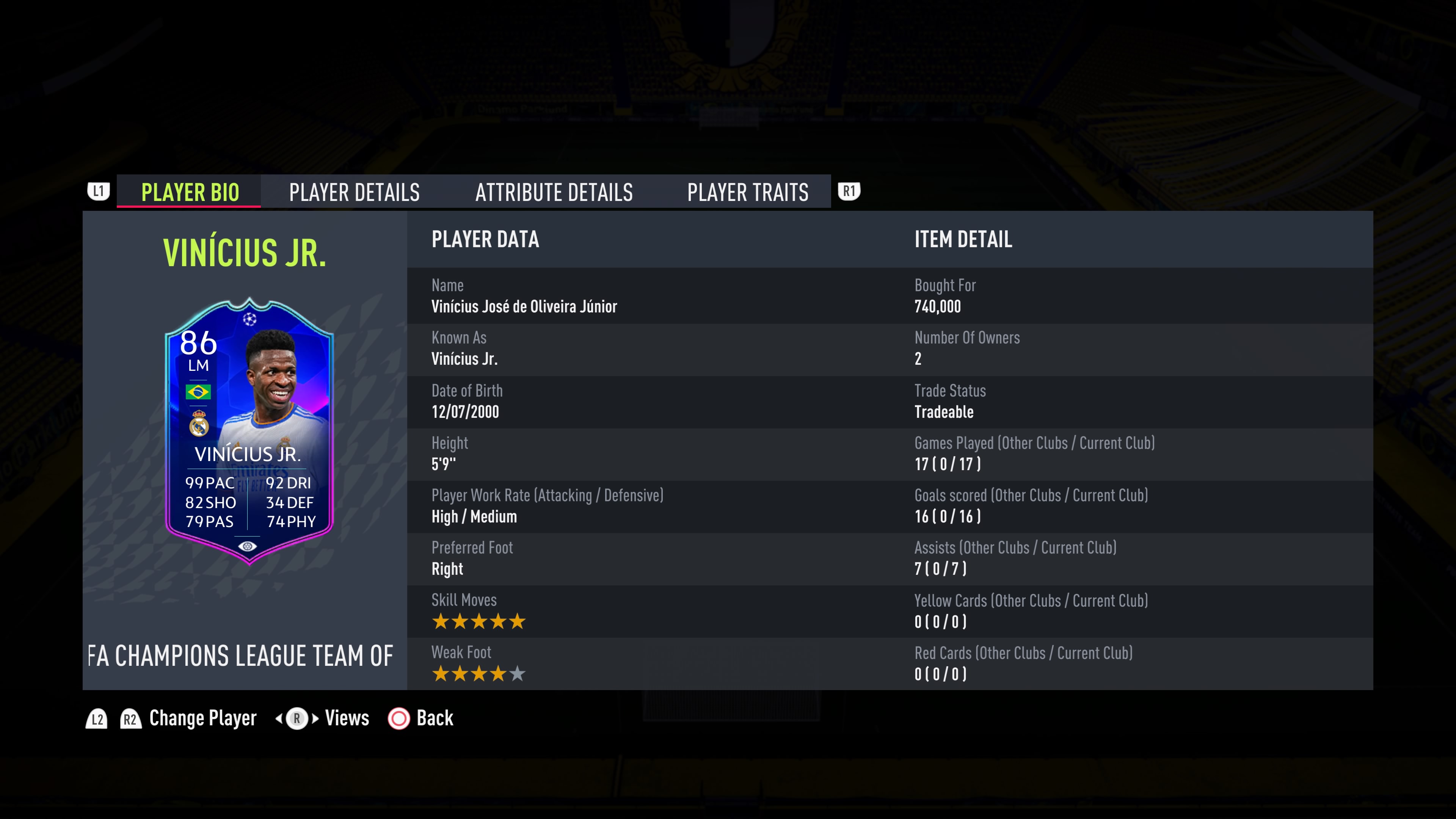 I've done the non-negociable 85+ DME. I did not think i would get TOTGS Vini Jr, but i was already saving coins for his SIF. I've read and watched a lot of reviews and i knew he would be as good as i thought.

I played "Vini Malvadeza" as a striker, deadeye chem. style, alongside Flashback Benzema on the 4-2-2-2, and I thought he would be something close to Neymar, but i was terribly wrong. This guy, oh, this guy is unbelievable. On his first match, I won the game for 7x0, with 5 goals from Vini.

He is unstopable. Just press L1+Triangle and let the magic happen. He also just doesn't lose goals. His Outside Foot Trait comes really in handy in a lot of situations.

I didn't have the coins for this guy, i got really really lucky (thank god), but if you do have, just BUY THIS MONSTER!

First of all,I'm not the best english language and this is my first review.

I've use him on

He is fastest in game I've ever used. If you think Hakimi is fastest on Fullback but my Vinicius Jr. is overtake him in game and everyone.

In Finishing part is good but sometimes he miss from easy moment,I think is because low composure (79)

After getting destroyed in division 3 constantly by the TOTW versions I just had to try him.

Paid 400k but it is without a doubt the best decision I've made.

Pace is unreal, shooting from any angle is amazing and dribbling is the best I've used this Fifa.

Physical is hit or miss