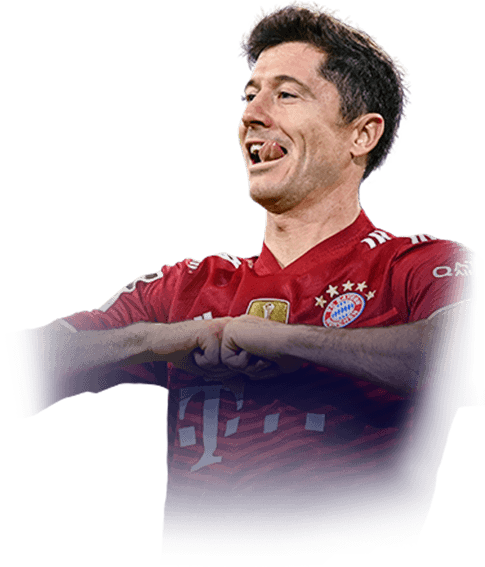 The TOTY votes are tallied, the debates are ongoing, the lack of Liverpool players depressing, and the gameplay is in the mud.  This extended Weekend League marks some of the slowest gameplay I have experienced in FUT as the latest patch certainly doesn’t benefit the brave.  While Mbappe and Messi were slightly out of reach, I was able to get my hands on the Polish Sniper to bolster the squad heading into yet another weekend grind.  My initial fear after a few early matches was that the gameplay would weigh heavily on a card like Lewandowski… and for the most part, I wasn’t wrong.   But as the weekend progressed and I became more familiar with the big man, different opportunities started to present themselves that are not there with other cards.  The ENGINE chemistry style was applied to try and help the Bayern man get around the pitch… while the striker position was a given in my 4-2-2-2 formation.  Lewandowski was the marksman all weekend long in the following squad: 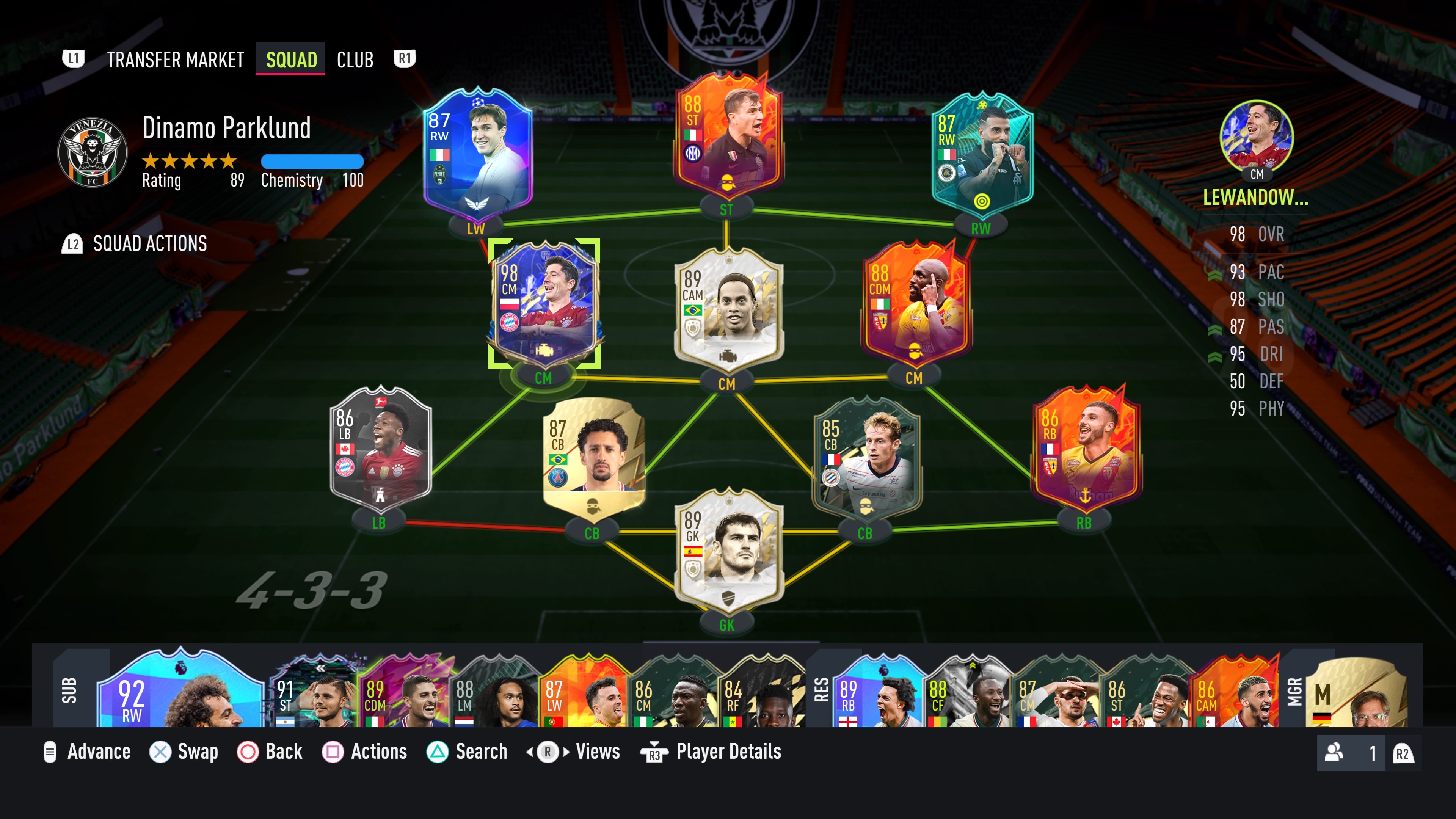 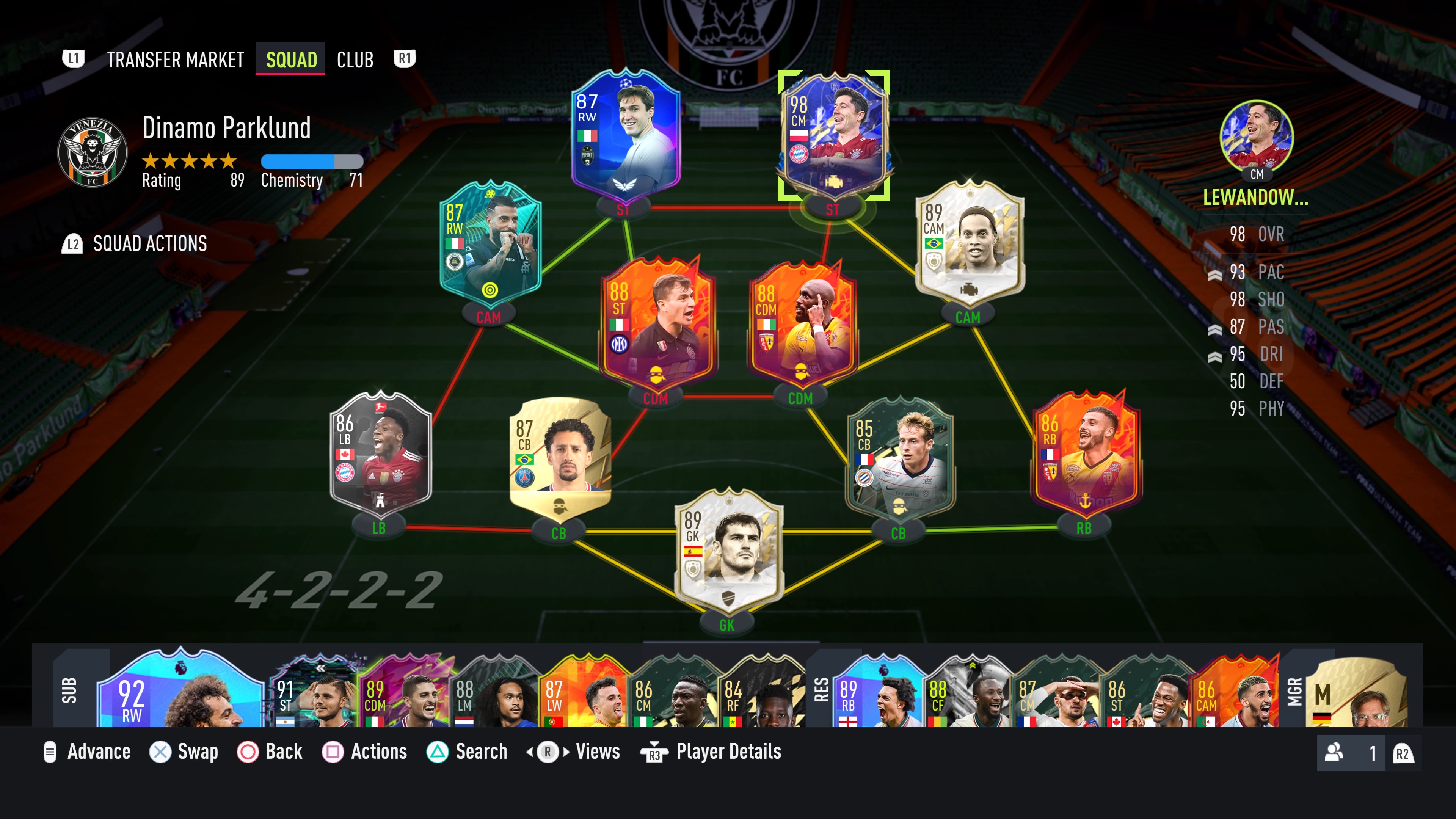 It took “21 games” to finally get my 15 match review with Lewandowski this weekend… I don’t know if it was frustration with gameplay or just generally being toxic… but I had 3 opponents quit right before the match started without gifting wins… and an additional 3 quits within 15 - 20 minutes at 0-0.  Frustrating to say the least… but maybe even more frustrating was the 14 goals and 2 assists that Lewandowski managed once those games were played.  I expected more, I wanted more, but in general, the current version of the game just doesn’t suit this card much at all.  The saving grace came in the form of lethal finishing and physical dominance… but after 15 matches it was back to the likes of NumberUp Jota to finish off my final 5 matches.

It feels like not giving this man a 5 STAR WEAK FOOT is a bit of a crime but it really didn’t much matter… in fact, it didn’t matter in the slightest.  As you can imagine this card is absolutely potent and the near perfect shooting statistics perform even better than advertised.  It didn’t matter the angle, the location or the keeper… the ball was finding the back of the net. Ultimately this is part of my frustration with this card, or maybe more so with the game, but it was near impossible to get shots away this weekend with Lewandowski.  The AI Patrol was out in full force blocking everything and tracking any turns that I attempted with the big man.  Near the end, I did start to whip in more and more crosses which actually proved vital in key matches, with Lewandowski rising like a magnificent salmon above the drop back depth of defenders and utilizing the 98 JUMPING & 99 HEADING ACCURACY beautifully.  Perhaps a move to more crosses would have added more to the goals tally this weekend… but paying 1.8 million for Andy Carroll seems ludicrous.

I realize this overlaps the previous category, but it just felt like all of the different techniques, attributes and statistics at Lewandowski’s disposal when it comes to putting the ball in correct locations was the main factor in rating him highly at all. True, the 97 ACCELERATION & 99 SPRINT SPEED did feel shockingly fast when he got into open space… but those moments were few and far between.  For the most part, this review was an exercise in patience… passing (98 SHORT PASSING)... and taking chances when they came.  The variety of shot traits that Lewandowski possesses just helps the 99 FINISHING & 97 SHOT POWER to work their magic that little bit more.

For 1.8 million this card just isn’t it.  If we get another patch and move back to a long shot, first time finesse, heck even corner glitches… then yes this card is certainly worth the price.  But as long as Drop Back Danny is sitting with 15 men behind the ball it is going to be hard to get the most out of Lewandowski.

With 90 AGILITY, 99 BALANCE, 98 BALL CONTROL & 99 DRIBBLING this card has every tool to work magic on the ball. The 4 STAR SKILLS are not too shabby either… but in the end, the body type and gameplay trumped those bright spots and left Lewandowski feeling sluggish when turning in traffic.

There have been moments this year when I know this card would have been dominant to an extreme level.  You can see the positioning is there and the card is trying to find the right lanes… but they simply aren’t there at the moment.  I hope things change soon and I would certainly take Lewandowski out for another spin… but for now my suggestion would be to park the big man and look at more crafty cards.  While they won’t have the potency of Lewandowski, and really not many cards do, they will handle the congestion of the current gameplay and fashion more shots across 90 minutes.  Let me know how your TOTY luck has been in the comments… I just packed my first one!  The curse is lifted, the pack luck might just be back. Hoping you are well! Cheers for reading. 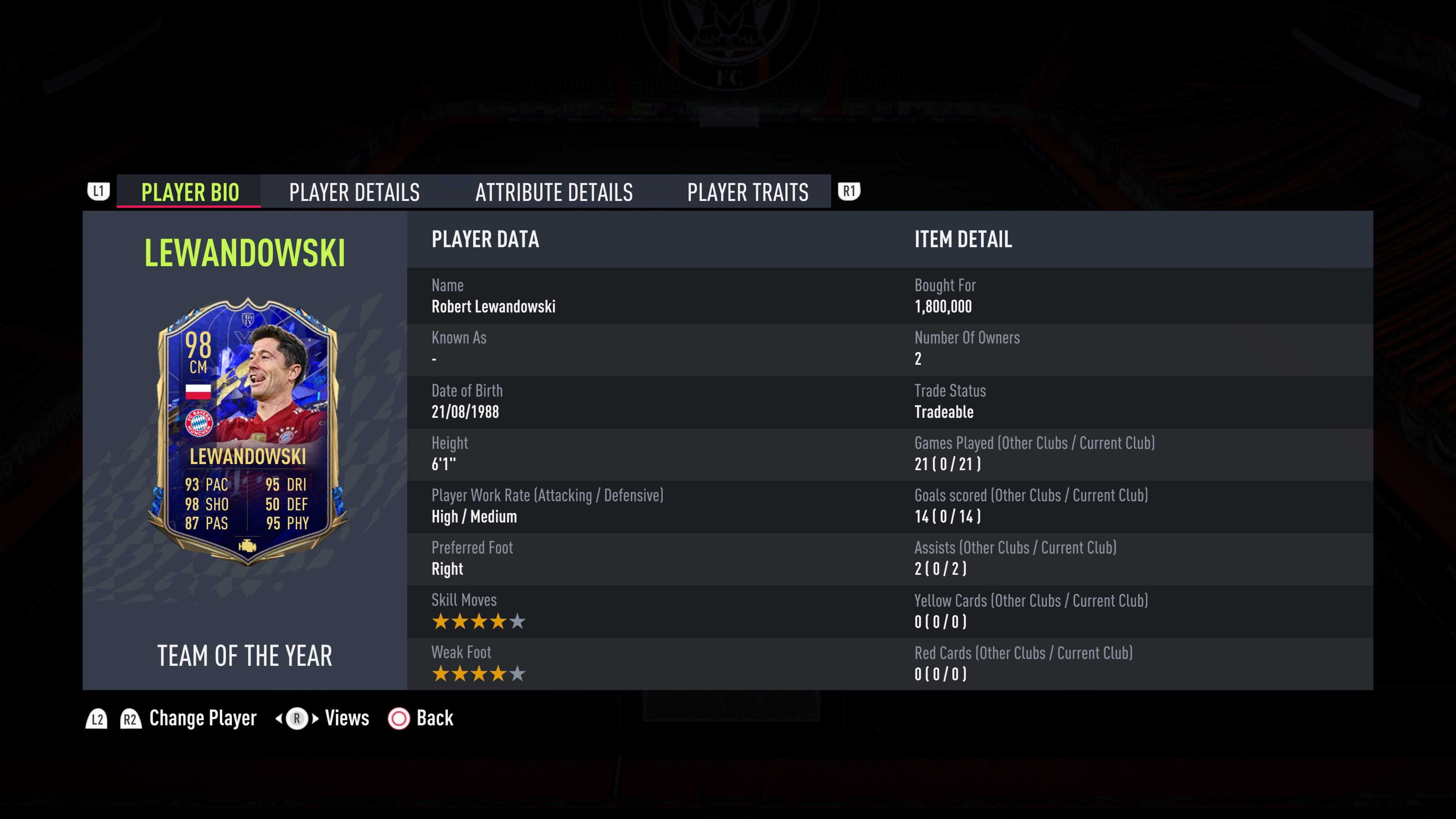 Good ebening everyone, Imma do a quick 98 Lewandowski for you guys. So I packed this card out of one of those upgrade packs, my first TOTY card ever.

I use Lewandowski in a 4-3-3(2) with an Engine chemstyle and I have a possession based style of play so my review will be based on my experience in said chemstyle and playstyle/formation, take this into account. So far I've used him in 10 WL games and he has been spectacular. Secured me the win in games where I'd lose it normally.

Pace: Uncatchable. If you drop it behind the defense he's gone.

Shooting: Kinda speaks for itself really. With 98 shooting, what do you expect? Bangs them in from all angles, in the box, out of the box, left foot or right foot (feels like a 5*), you name it. For some reason his Positioning really stands out for me. Always makes the run at the perfect time, when you want to drop the ball over the defense (in the opponent's box it's even more noticeable) he holds his run and positions himself in a way where you get the best angle to take the shot and he like, doesn't get cought offside? He's been offside like 3 or 4 times MAX so far. Also, he takes the shot very fast, faster than most players I've used so far. When you press the shoot button it feels like the ball immediately leaves his foot, which gives the defender less time to block and keeper less time to adjust etc.

Passing: Also really surprised me. I like to play with a striker with (very) good passing, because I like to involve him in the build-up. This year I have used both Messi and 90 Eto'o in that role and honestly they were amazing but Lewa is just bonkers man. Can play it short to one of your mids, switch play to one of your wingers... What stands out for me is is his one touch passing. I've had multiple IG situations so far where he's holding off the defender, receives the ball and immediately gives a perfect through ball in the space behind the opponents defense to one of my midfielders/wingers, without them having to adjust their run.

Dribbling: Doesn't feel clunky at all, if anyone tells you different they're lying or their gameplay just sucks. Can dribble in and out of tight spaces and actually feels very smooth and responsive on the ball. He's no Messi but still.

Physicality: Lasts 120mins without any problems, very aggressive when trying to win the ball back and his areal presence is phenomenal. If you like to cross the ball into the box he's the guy you're looking for. Rarely lost a header against his direct opponent so far and heads it in the top corner with ease. Now, some of you may have read the comments and noticed how a lot of people have been saying that 99 Strength is fake. Kinda have to agree, doesn't feel like 99 strength, more like high 80's. Doesn't get bullied of the ball, just has these moments where you think "with 99 strength he shouldn't be losing the ball like that".

So to TL;DR: Insane at literally everything, plays like a nr. 10 in attack.

I think that's it really, hope it's useful for you guys.

Everything, but to point some of them out:

I have never used a better striker in any FIFA, ever. I have never had the luck or money to buy a TOTY or elite Icons/Legends, but I packed this guy, and wow. He is genuinely fast, not Mbappe fast, but like gold Messi with a hunter fast. For someone that is 6'1" that is a crazy amount of speed. He is incredibly hard to knock off the ball with his 99 strength. His dribbling feels amazing, kind of like a barely clunkier Neymar. What Lewa has that Neymar doesn't is the sticky feet, balls just seem to magnetize to his feet so even if the ball is slightly knocked off, it always comes right back. His passing is good, but that's not why you are using him. Finally, his shooting is god-tier, goals that never went in with FB Benzema, FB Icardi, gold Messi, and gold Neymar find the back of the net with Lewa.

I was super fortunate to pack this card right as he came out and I managed to play almost 30+ matches with him. My initial thoughts on him were mixed, sometimes he played like the greatest player of all time, and other times he was just the most unresponsive card in the game (LewanDISNEY). This was probably due to the gameplay when the servers were so congested due to TOTY but in good and responsive gameplay he's an absolute joy to use. I've linked a Youtube video below showing some of the goals and chances I had with him.

His pace was unbelievable, he would simply blitz past players, and the second he was through the last man no one could catch up to him. His Shooting was unreal, I don't think I need to comment on it besides that it's basically a goal every time you shoot on target from the box. He can also hit some nasty longshots. The one thing that surprised me the most was his passing, he was simply incredible, he could hit 40-yard pings with pinpoint accuracy, and definitely was the trait that surprised me. His dribbling was super responsive when the gameplay was good but with the servers so busy a few times he felt clunky and missing from the entire game. Finally, his strength, I mean the man is literally a tank with a Formula 1 Engine.