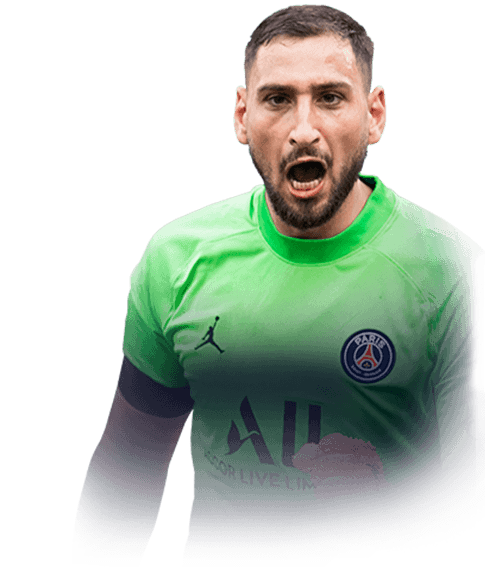 His real-life stats are currently 0 goals and 0 assists in 8 matches in domestic competition. He also received 1 yellow cards and 0 red cards.

Alright, here it goes. Now for about 25% of all FIFA 22 Players, if you've opened packs during the defender TOTY release, you've probably packed this guy. Considering how many are on the market at the current moment, this guy has been easily obtainable. For about 3 months, I've had Mid Cech in goal from the SBC and before the patch he was a God. Even after the patch he's still good but they've definitely nerfed keepers. That being said, we're talking about TOTY Gigi. If you've played with his gold, you'll know that he's one of the best keepers in the game. I can firmly say that he is STILL A BEAST! His animations are amped even more now! He feels faster when he runs to get the ball. Of course don't hold Y/Triangle expecting him to grab everything but when the opponent is in the box, there's something about him that almost assures him to save the ball. Now, he is not perfect. There was a goal that a gold CR7 scored that bounced from his hand into the goal that was actually insane. But other than that, his height combined with his speed make this card a great keeper. Yes, there will ALWAYS be the argument that gold Areola or Pope will do just as well. And if you have 200-300k, there are definitely more useful players to buy than a over-average goalkeeper. But, if you pack him, you will enjoy him. NOTE: Every player's experience is different! You may find him conceding goals more than you expect but if you're relying on your goalkeeper to do your defenders' job, then you simply don't know ball. TOTY Donnarumma can be the saving grace that your team needs when all else in your AI defense is lost!

After seeing him at about 180k (Xbox) I thought I'd try him and boy did I screw up. You'd think he'd be the best goalie in the game with his stats and height but he plays like a non-rare silver. His positioning and handling are HORRIBLE. He lets every outside of the box finesse shot in, and refuses to catch a shot. I conceded so many rebound goals with him, it's infuriating. Gold Areola is much better than TOTY Donnaruma and that makes NO sense. Save your coins and don't bother with this card, trust me and all the other poor souls who tried this card.

Will make you rage

Donnarumma is not good. If you pack him, maybe use him, but never buy him. I currently plays in division 2, and Donnarumma doesnt save anything. Especially his positioning is awful. I packed this guy, and was gazzed, because its obviously a TOTY. Im not gonna say that he is bad, but for a TEAM OF THE YEAR, he is definetly not worth it. I have switched him out for gold Maignan. That is how bad he is. And mine is untradeble. He is very good at saving close-up shots, and fills a lot in the goal, but when it comes to shot closer to the edge of the box, his positioning and agility is horendous. Dont buy him!

He can save close shots

He doesnt work, and do too many mistakes.

Shots further away from goes in far too often.

When its a TOTY, you would expect a lot more from him

Packed this guy in an 81+ Double Upgrade SBC and obviously was gassed, a 96 TOTY from a super easy SBC.

However, after using him for 20 games I just gave up. His 96 feels more like 81/82; he's since been replaced by POTM De Gea who is worlds better. There is very little this card is actually good at, a shame because he's exceptional irl.

It's okay for high shots or low driven shots. Any shot aimed at about mid heigh though will go in, since he always seems to dive under the ball in these situations. Definitely doesn't live up to the stat and height combo though, feels more like 85/86.

Reflexes in 1v1 situations are fantastic. The height combined with his agility make it very hard for strikers to score close up in a 1v1 situation as he just sweeps out and smothers them. Sadly however, this is pretty much all he can do to a good standard.

Reflexes when saving those near-post shots from the wing are shocking, lets them in every single time. Also seems to get nutmegged a lot which is pretty embarrassing tbh.

Possibly his worst attribute ingame, very frequently out of position and seems to struggle to get back into position quickly. I never really understood how important GK Positioning was in FUT until I used Donna.

Feels very fast ingame which again allows him to be very effective at reflex saves in close up 1v1 situations.

Really nice goal kicks, poor throws so overall I'd give it a 7/10

Overall I'd recommend 100% DO NOT BUY. If you packed him untradeable and are a very good defender then maybe you'll consider using him because he looks good in a squad, but if you need a good Ligue 1 goalkeeper, 84 IF Lafont is still the best by a very large margin, and literally 5 times cheaper. Donnarumma is great in close up 1v1 situations where he can sweep out of goal and smother the player, but that is literally all he actually excels in, everything else is either merely adequate or poor. The only use for this card for me was in an SBC.

Concedes goals where the ball goes straight through his legs

No Saves with Feet Trait

Packed him untradable during TOTY grinding and have now used him through two weekend leagues and some rivals games. I was expecting him to be incredible as I had used his regular gold for months when 22 released, but unfortunately this card is a bit disappointing. With stats like those you would assume he would be near unbeatable however he consistently lets you down in 1 on 1 situations and is clumsy with balls in the air. I won’t go as far to say that he is trash, and you shouldn’t use him, but there is certainly better GK’s out there. It got to the point where I never thought he would bail me out with a great save, and he consistently lets goals in that other keepers might actually save. It’s as if EA have given him beefy stats and nerfed him at the same time.

-         Distribution is fantastic, throw’s especially are fast and long

This guy should be amazing but can't make a save. He just watches the ball fly by. do not buy a horrible player sometimes I legitamently think he is asleep. The way he tries to make a save is he throws out his feet and collapses.

+I can't think of any other than good fodder.

-Occasionally he makes a good save but most of the time he just lets it go in.

- I cannot stress how terrible he is.

I've played thousands of games with him but only one clean sheet in squad battles averages 4 goals against per game in champs and rivals division 6 and if you think my team is awful check it out.

I was so stoked to of packed my first ever TOTY and I've been playing FUT since fifa 10/11...Put him straight into my team and from game 1 he was absolutely shocking. diving aimlessly for easy shots, punching the ball towards opposition players allowing an easy tap in. I am going to use him as fodder for the right SBC one day. Such a shame. Stay away from him!

I'm sure your here because he's the only TOTY that came out of the hundreds of packs you saved for TOTY. And yes, the joy of seeing a TOTY walkout is amazing, only for you to find out that this card is, by all means, the worst goalkeeper in the game, let alone the worst TOTY card. The best comparison to him would be to a bronze goalie of your choice, who, by the way, would pull off some better saves than this utter disgrace of a card. Where do I begin with how awful this TOTY Donnarumma is? He reminds me of Karius in the UCL final, except for the fact that he is amazingly consistent - in missing every single shot that comes towards his way. His reflexes are arguably slower than my nans, who would be able to dive better than he can, he just CANNOT SAVE ANYTHING. He's so bad that, whenever I come across him in a team, I smile, knowing I can score long shots with my Kimpembe who's got 42 shooting. Heck, I could probably score a goalkick with my SIF Lafont, that's how bad this TOTY card is. After around 10 games with him I just threw him into an SBC, he's more useful there than on the pitch. Awful, awful goalie.

I was lucky enough to pack this card, but little did I know that this card was a burden in disguise. Considering how OP the keepers were at the beginning of the game I was expecting big things.

and what a massive let down this guy is. I was using inform Szczesny and he was fair decent, and after 62 games with this 6'5 disappointment I've gone back to Szczesny. I don't write many reviews, but this card vexed me that much, it needed mentioning.

i packed Donnarumma from a small league upgrade pack and was of course very happy. I directly wanted to use him since i thought his gold card was quite good already, so this TOTY version obviously had to be better. That was not the case somehow. Donnarumma is a perfect example of how stats can lie to you. This is supposed to be the best keeper in the game and he’s close to the worst keeper i’ve used so far this FIFA. I played about 10 games with him in WL Qualification to test him out and not once did he make a save in a 1v1. From distance he’s alright but still hasn’t been better for me than Courtois IF. Even gold Neuer is better.

He dives underneath the ball 24/7

Never saves with his feet