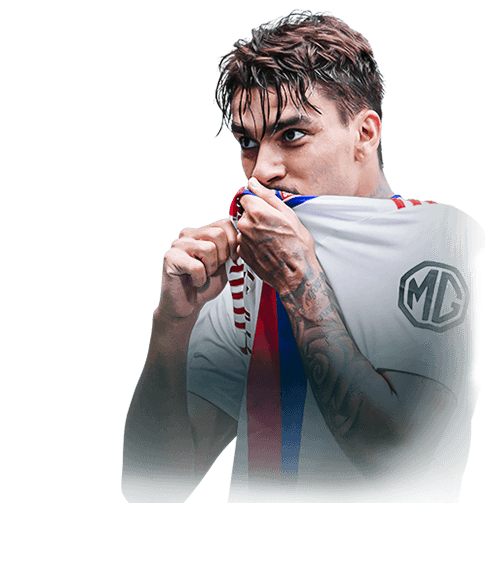 -
Sub out
Upcoming Matches
P. Chemistry
Squad chemistry
ST
86
RW
89
LW
89
CF
89
RF
89
LF
89
CAM
90
CM
90
RM
89
LM
89
CDM
85
CB
80
LB
82
LWB
84
RB
82
RWB
84
Reset
Basic
Sniper
Finisher
Deadeye
Marksman
Hawk
Artist
Architect
Powerhouse
Maestro
Engine
Sentinel
Guardian
Gladiator
Backbone
Anchor
Hunter
Catalyst
Shadow
Comments
Reviews
0
/600
Click here to verify your account in order to comment Update my avatar Dos and don'ts
Top Rated
New
Controversial
Show comments
Top Reviews
Only logged in users can submit a review
A review must be written in English
At least 200 characters are required.
Compare this player to other similar players you have used(optional).
If you import your club to FUTBIN or send us an image with the player data(fill the form below) your review will be marked as verified.
Include what you liked about the player in the pros area and what you disliked about the player in the cons area.
Your review will be manually checked during the next 24 hours.
Chem Style Used
Formations
Position
Rate Player Base Stats (1-10)
Pace
5
Shooting
5
Passing
5
Dribbling
5
Defending
5
Physicality
5
Most Used In:
Submit Review

So.... I used to play with Aouar and Llorente, and i've been struggling for quite some time, i tried to replace Llorente with Tchouaméni but the guy was just to stocky for me. I'm a big Olympique Lyonnais fan so i refused to replace Aouar, when i saw that this Paquetá, my eyes started shinning like two gold stars. Thankyfully i had the fodder and the coins to do him.

He completely changed everything, he was like the missing piece of this team, he's everywgere in the field.

A few points to start. I play in Div1- Elite division and usually get 11-14 wins in Fut Champions. I use Lucas at CM with Aouar.

The main highlights for me with this card were :

Pace - He has 84 pace or 94 with Shadow Chemstyle applied (Whether or not I believe pace on chemistry styles applies aside here). He is not Usain Bolt, but he is pretty fast, he can get around quickly and sometimes outrun defenders.

Shooting - Right, left, i don't notice the 3* Star Week Foot inside the box, the man just does his magic and scores everything he touches inside the box, i found the outside of the box shots a bit weak because not only i can score a lot of bangers, but he misses the finesse shot trait.

Dribbling - It's a bit of a mix of Neymar and Fekir together, agile and fast dribble, with that 5* Skill Moves u can do some nasty plays and left your opponents in the mud.

Physical - His average body type + his 86 physique is the perfect combo, he wins most 1 on 1 battles for me and he can bully so much people out of the ball. Obvious if he goes against a Capoue or Vieira he won't win it right.

Defending - He has 77 defending or 87 with Shadow (Whether or not I believe defense on chemistry styles applies aside here), he can win a lot of balls, he is not a kanté but he gets the job done pretty good.

He does literally better than i expected and for me it's one of the best i've used this Fifa.

Overall, in my opinion he is worth the money and coins because even if you don't like him he is good fodder, but i almost assure you he will gonna do some magic stuff in your team.

Weak foot but it isn't noticeable in my opinion

In my team he is used as a DM in a 4-2-3-1 on 7 chem but he was a card i felt i just had to do because my team was lacking midfield quality, but lets get on to the review.

I feel like he may have been over hyped but that doesn't mean he is bad he feels strong on the ball but sometimes has moments where I feel he gets bodied of the ball by a small attacker but overall hes quite solid. he dribbling is amazing and he gets past players with ease and is a very good play maker when on his left foot his weak foot isn't bad for only being 3* however sometimes on his weak foot he makes a terrible pass that messes up the attack so keep that in mind.

I haven't really taken many shots with him as he doesn't really seem to get into attacking postilions for me, but he is surprisingly good at defending and i have barely coincided many shots with him never mind goals he seems to block everything and feels very fast and responsive and if you have the cards to complete him i would recommend

However I don't know if he is an elite level card yet which is what I was expecting.

SHe plays at cm and he's really useful when attacking specially because of the good dribbling and 5* skills his passing is good as long as you use the right foot which is a bit sad cause i like everything about him but in driven passes he's weak foot really is a mess.

He is not bad at defence specially when i tried him with a shadow he won't be a kante tho i recommend him being the attacking cm but for an attacking cm his defense is useful.

Almost all his ingame stats are above 80