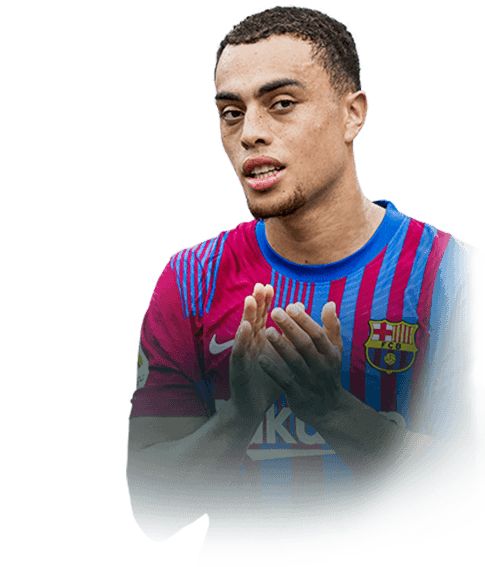 -
Sub out
Upcoming Matches
P. Chemistry
Squad chemistry
ST
81
RW
86
LW
86
CF
85
RF
85
LF
85
CAM
86
CM
86
RM
87
LM
87
CDM
87
CB
85
LB
88
LWB
89
RB
88
RWB
89
Reset
Basic
Sniper
Finisher
Deadeye
Marksman
Hawk
Artist
Architect
Powerhouse
Maestro
Engine
Sentinel
Guardian
Gladiator
Backbone
Anchor
Hunter
Catalyst
Shadow
Comments
Reviews
0
/600
Click here to verify your account in order to comment Update my avatar Dos and don'ts
Top Rated
New
Controversial
Show comments
Top Reviews
Only logged in users can submit a review
A review must be written in English
At least 200 characters are required.
Compare this player to other similar players you have used(optional).
If you import your club to FUTBIN or send us an image with the player data(fill the form below) your review will be marked as verified.
Include what you liked about the player in the pros area and what you disliked about the player in the cons area.
Your review will be manually checked during the next 24 hours.
Chem Style Used
Formations
Position
Rate Player Base Stats (1-10)
Pace
5
Shooting
5
Passing
5
Dribbling
5
Defending
5
Physicality
5
Most Used In:
Submit Review

Much like many other fifa players, here I was casually refreshing my futbin and fut page at 17:59 to see what new content would be made available for us during TOTY. Bang on 6pm my eyes were drawn immediately to an array of defensive talents that will no doubt ruin many weekend leagues to come, whether it be Marquinhos somehow towering over my Ibra, Hakimi running through my defence as if he were Messi dribbling past Boateng or Donnarumma catching my 99 shot power ball in between his buttcheeks from 6 yards. Then I made my usual way over to the SBC section to see if there were any value for coin challenges to complete, and then I saw the name Sergino Dest pop up with a nice little player moments icon next to it. My first thought as a Barca fan was "WHAT FUCKING MOMENT????", turns out he scored a banger for USA, fair do's. Anyway I looked at his stats on futbin and couldn't really believe what I was seeing, 95 pace, 85 defending, 98 stamina, 95 agility, 4*4*. I was certain this card was gonna be hella overpriced, especially as la liga needed a decent rightback imo (Navas is too weak, Capa is decent but hit and miss & Trippier is Trippier). The moment I saw 82 and 85 rated squads, a grin began to emerge on my face, only eclipsed by the smiles that my SBC Pique and Coutinhos were giving. Naturally I did Dest as quickly as possible and made a team.

Before I review him, there's a few things to clarify:

* I started him LB on 7 chem to accommodate for a TOTY Messi on the right wing, in game I swapped him and Atal.

* My instructions were stay back, with normal interceptions. Except if I was losing in the 70th minute, then he would join the attack (this only happened once).

* I was playing division rivals, I was an elite player last season but got downgraded to div 2 this season and didn't really play div rivals due to exams and icon swaps. During the course of the 15 games I played with this team I reached back to elite div with 1 loss.

But enough of the jibber-jabber, let's do a review.

Analysis: He was quick, like super quick, he was catching the likes of Mbappe in a manner I've rarely seen in Fifa 22. On 7 chem and anchor he was just shy of 99 pace, so I can't wait to use him in his proper position on full chem.

Analysis: Okay, so here's the one part of the review that I am absolutely useless in helping you with, unfortunately he didn't have many opportunities to take a shot for me, partially due to the instructions I gave him and the fact that most corners he was usually the defender on the halfway line to stop counterattacks. Hence, I've left my shooting rating the same as the cards stats itself. However, if his shooting is even half as decent as the rest of his abilities then you're in for a treat.

Analysis: One of the most quickfire ways for a fullback in Fifa 22 to get on my bad side is to start playing shitty passes in areas where I simply can't afford to lose a ball. The likes of Alex Moreno (IF), Alba and Telles have all fallen foul of this and have led me to revamp squads in the past. However, Dest was pretty exceptional in this regard, he was always a reliable short passer of the ball and quite often played powerful driven through balls onto my strikers and wingers, splitting open my oppositions defence in the process. The 78 long passing stat feels like a lie, I would say 85-87 is more appropriate for his in game feel. Now whilst I have 0 recorded assists for him, it feels almost unfair to write that as his vision and passing were often the pre-assist to goals, I would argue that he contributed significantly to at least 5 goals in 15 games where roughly 10 were rage quits at various points, which for a right-back is pretty impressive. It must be said though that he was providing for a TOTY Messi who will manage to turn your Grandma's ashes into a goal.

Analysis: One of the most quickfire ways for a fullback in Fifa 22 to get on my bad side is to begin to dribble a ball as though he's got some massive dick weighing him down from moving his legs in a coordinated fashion in areas where I simply can't afford to lose a ball. Though this was never an issue with Dest, he felt clean on the ball, feinting at the right times when I use the left stick to turn and generally running past defenders with ease. I'm a personal fan of the berbatov spin when pacing down a wing, and his 4* skills really came into effect here, I've found skills such as this are often more effective when using fullbacks that have skills, I guess the opposition player is probably not expecting it as much and doesn't try to predict it. His 95 agility and 86 balance could definitely be felt when using him, effectively making him feel more 'fun'.

Analysis: We come to the most important stat, now one of the most quickfire ways for a fullback in Fifa 22 to get on my bad side is to defend with the physical strength of bhad bhabie and the intelligence of her too. To summarise Dest in one word: Imposing. At 5' 9" and average body type, he doesn't immediately strike as a fearsome defensive stalwart. However, give your oppositions winger one taste of Dest and I promise you he will think twice before trying to attack down that wing again. He feels like a bully at times, persistently snapping at the heels of the player with the ball until catching up with him and shouldering him off the ball. One of the hardest things for a Fifa player to assess during a game is a players defensive awareness for players not playing at centre-back, when centre-backs are positioned poorly the consequences are often severe, with fullbacks it's not so evident if they are sometimes in a bad position as a centre-back may cover for them. However, Dest's defensive positioning actually stuck out as very impressive to me, he always felt like he was in the right position, especially when I compared him to his partner Atal, Atal is usually a player I have no complaints for but he was just being consistently overshadowed by Dest's quality, to the point that I was almost ushering my opponent away from my left side to my right so that I could have Dest defending the ball instead of anyone else. In short, his defending is exceptional.

Analysis: One of the most quickfire ways for a fullback in Fifa 22 to get on my bad side is to be panting like an Afghan refugee running from a taliban missile in the 60th minute. 98 stamina kinds says it all though for Dest. He will run, run some more, run again and then run for fun and barely have broken a sweat. His strength says 80, but that is far from the the truth, he was pushing wingers away left and right, I would have said it feels like 95 strength, but by the luck of the draw the players I played against usually had tricky wingers and strikers as opposed to strong ones such as the Ibras, Lukakus and Drogbas of this world. So i'll reign in my estimation of his in game strength to around 88-90. The one slight downside to Dest is his ability to head a ball though, he's quite short and lacks in the way of heading accuracy, but largely this feature of his play isn't very important.

A quick afternote: I might come out sounding like a crackpot here, but I have noticed in a very weird way when player SBC's come out, the players feel a lot better immediately after having been released and then sometimes drop in quality after a week or so. This could potentially be attributed to the fact you play with them more so their novelty wears off and they feel a little less fun as opposed to having gone down in quality, but regardless it is still useful to bear this in mind whichever way you fall on this argument.

Apologies for my English, it is my first language.

Not necessarily in that order

You can only have one Dest in your backline.

Heading could be better.

I'll start with this, I predominantly play a 3-5-2 and I love Jesus Navas. Sure he had his weaknesses (both strength and in the air), but to me he was hella dependable. But do I miss Navas? Absolutely not! Tbh I don't think anyone does, his price has basically been halved since this card became available.

Dest has got everything you need to play anywhere along RB - RM. Pace spamming Mbappe's? Right in his back pocket, where they belong. His pace, positioning, dribbling, and crossing make him the perfect outlet for the counter (it might also help that I don't set him to 'come back on defence', he rarely does this which can sometimes be annoying but he's almost always an option if another player wins back the ball).

For what he offers I consider him a pretty cheap SBC, even as a casual player I doubt you'd have to spend a lot to get him (the conditions seem pretty tame). He'd be a great signing regardless of your division, and if it comes to it he'd also be great coming off the bench in search of that late winner!

Would be unquestionably perfect if he was more of an aerial threat.

He flies over the field, hes fast, strong, can pass well, his crossing is good, he can win headers, and did i mention hes fast?

Dest alongside potm Davies is so cracked.

At first i had headliners clauss at my rb spot, but then i saw this sbc, i tought i wouldnt do it, bcs clauss has been so good for me.

Then my friend told me that hes super cracked, so i did the sbc and here we are!