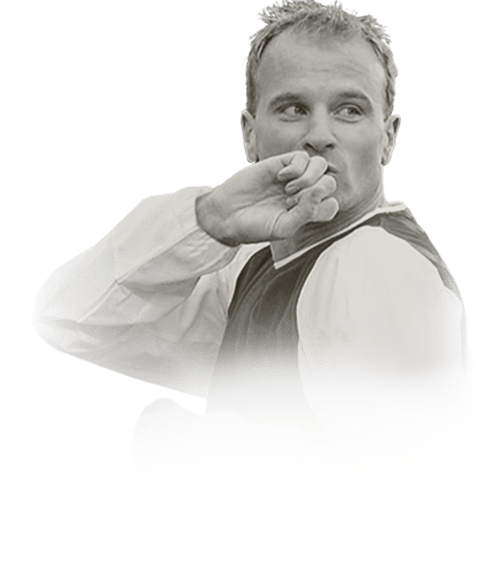 Bergkamp was the first icon moments sbc i did back then when they have first introduced years ago in this franchise, so each year I take a sentimental trip and buy his current card and give it a run on a full futchamps. I was pleasantly surprised when I hope into my first game and see that he doesn't feel generic or super clunky like years prior and that this card has some flair to it that makes it fun to use. Shooting is amazing on this card, his finishing is comparable to another top tier striker like FB Suarez and Prime Butra while his positioning and attacking AI are good and far from generic, he knows how to position himself on the pitch to contribute to build-up play while finding pockets of space on the box to receive a pass before turning and shooting with either foot. Talking about either foot, the 5* WF upgrade is a noticeable one not just for shooting but for passing too, already having good passing stats he is not as a good passer as other cards like FS Wirtz or TOTY Bruno but is available to find attackers in the most clutch situations and his passes are usually precise and come with a welcoming bend to it that allows it to go through lines of defenders evading interceptions. Now to the not so good part of the review, his pace is mediocre at best that even though does not make him unusable is sometimes complicated to work with when the Varanes and Rudigers start to appear, dribbling is another thing that this card is not as good as stats say and that's maybe due to the really low agility, unfortunately, he's not capable of pulling those dribbling animations that other cards with high ball control can like Zidane for example, he is available to turn quick though but don't hold the ball too much as he may surprise you with a bad touch out of nowhere. For last, the physicals are also mediocre, he does feel like he can hold the ball in-game most of the time but not for long and his stamina makes him a card that can not perform that well after de 75-80 min mark.

As for chemstyles, I tried engine and hunter. The engine makes the card the most usable for me, tackling his main problems like agility and balance while giving him a must-needed pace boost and some more passing.

In conclusion, Bergkamp is a card that I personally recommend to pick up if you are looking for a CAM/CF that can shoot and pass with a little flair to his game, he's is fun, reliable in most games, and pretty fair priced as of the current market while I'm writing this review. I´ll be trying either Zola or Sanchez next so stay tuned for more reviews. Thanks for reading