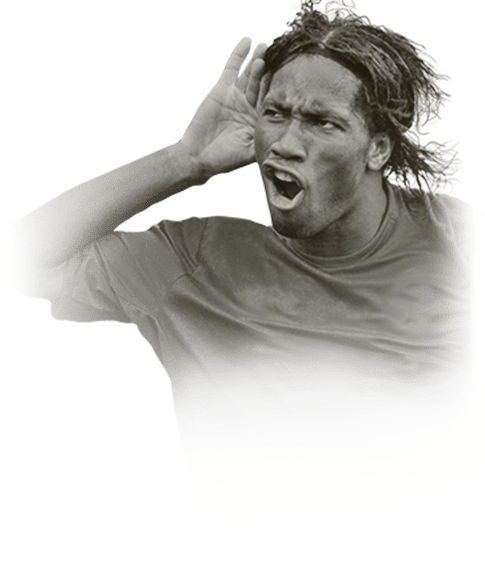 I had to wait a little till he dropped to that 1.5-1.6m price range to make the swap as his prime card was definitely the weakest link in my Chelsea past and present. And Drogbas prime was by no means a weakness, but it had its flaws. This card fixes all those flaws and more.

I used his prime version for a total of around 400 games, so its safe to say I can compare them justly and boy oh boy is this an upgrade.

Of course I'll start of with the only attribute you care about you ratty pace merchant. Blistering. Compared to his prime this is one of his biggest upgrades. Not necessarily because of the boost to his pace itself but more to do with the balance and agility. With an engine card he is sitting at a comfortable 98 acceleration and 96 sprint speed, and it really shows. He isn't Mbappe or Vinny Jr fast but his pace is respectable and will easily break past someone who isn't marking you too closely.

Not too much to say here apart from damn. His prime card was a monster at finishing, and made it very easy to make people realise that he was not someone to be left alone inside the box to shoot. Combined shot power, strength and composure means he will always get an absolutely solid shot on target even when shoulder to shoulder with a defender. Shot power is exactly what you expect from a striker of his calibre and with the outside the foot shot as well as 4* weak foot he will give you the results you need if given a chance on target.

Volleying is an art to Didier. When you add a card like this to your front line it opens up a world of untapped potential, and that is crosses. If the ball's looped in front of him, to the side of him, and behind him so long as there isn't a defender in front of him you can be sure it's going on target and definitely not weakly. Added bonus of Didier being an absolute flair monster, I love my flair shots, and so does he. Scorpion kicks? Bicycle kicks? Karate kicks? Rabona volley? He does that for fun.

Now for the absolute bread and butter that is Didier Drogba. The aerial menace. Seriously, I have had like maybe 5 or 6 goals conceded from just outright normal corners since they patched the corner glitch. No one tries it because they don't have faith to win aerial battles. Well this man said nah. Drogbas prime was already a threat, but this card took that to the next level. With the upgrade of his balance and the minor boosts to his strength, jumping and heading accuracy, paired with the power header trait. Let me tell you. This man scores headers.

If you have this card up front, no longer is it just a cut back simulator and early driven crosses to try and get it to the feet of your ratty 99 pace 13 physical strikers but it leads to a new found confidence in crosses.

Once you get comfortable with the set piece, 2 1/2 bars of power aimed just outside the 6 yard box, switch to receiver and get in position. They can try to stop it, but if they don't get in front of you it will be a good header, and it will be on target. Once you've put in a few at the front post to stop them rushing their keeper out non stop, swing it into the penalty spot and watch him leap onto those corners like a salmon out of water.

Always celebrate with a knee slide.

This is where it gets saucy. Not Rat Yedder saucy, not Fekir saucy but that perfect level of sauce spread onto the bun of your burger. His dribbling boost really shows. The bonus balance and agility are what defines this moments card as useable not just as a lamppost to aim of with crosses but as a star striker. His ball control is outstanding, and very rarely takes bad touches. He uses his head a lot, not necessarily for thinking, more of a "I'm going to smash this ball forward with my head, run in front of you and there is no chance on earth that you are getting in front of me" way.

Controlling the ball from the air is also phenomenal, feel free to start kicking up to him and shielding whatever poor defender is trying to stop you from calmly taking control of that ball.

Dribbling like I said isn't the toppest of tiers but is very responsive and as long as you aren't trying to dribble your way out of every situation can easily beat a defender who steps up recklessly. His turning is insanely more responsive that the prime version, which makes 3 point turns in the box a very consistent option for him if you find yourself being jockeyed to death.

Composure as mentioned before is just no less than perfect. Never have to worry about his performance while being jostled.

With an engine card, overly sufficient. As long as you are making the right pass at the right time, he will provide. His short passing is great. Long passing is there, but not phenomenal. He can switch it to space very consistantly but sometimes will overhit through balls and lofted down the middle, so LB/L1 + Double Y / Double Triangle is the way to go.

Again, flair is a win. Loves his gypsy flicks and first time flair lofts for some fancy link up play.

Float like a butterfly, sting like a bee. Except in this case the sting is closer to a haymaker from a silverback gorilla. This man possesses the strength of Mr Incredible combined with the sensual flexibility of Elastigirl. His strength is just in a league of its own. And again, with the added balance has just made him an entirely different animal. He is more than capable to pushing his way past your usual TOTY Marq, FB Varane, RTTF Kimpembe, all of them are reminded of just how small they are compared to the big D.

Jumping, as mentioned before, is just dynamite. Dudes got kangaroo blood running in his veins.

Stamina is also excellent, even with his High/High workrates he always has over 50% stamina left at the end of the match.

Same as any other striker really, don't expect him to make and crazy interceptions or clean tackles, but with his physicality he comes out of challenges a lot better than most other strikers, and has impressive reach if you do make a well timed interception.

Overall, this card is a machine. Didier Drogba turned up to do two things, remind us that It's a ******* disgrace, and kick ass. And he does both phenomenally.

This isn't a ratty meta card. It's not going to dribble you into the rivals leader boards and it's not going to kick of glitch you into div 1 of champs. What it is going to do, is provide you with an absolutely phenomenal big man up front who will find the back of the net with any chance he gets. And if you have the funds to get him, then make your dreams come true.

Icon Profile is from his time at Marseille, not Chelsea, It's a ******* disgrace!

On the expensive side of icons coming up to a point where the power curve is catching up to cards like this fast.

My first review and it is about this big player. He is for me the best striker in the game and I played nearly everybody.

Pace: I was shocked when I started running with him. He was so fast with this big body. Even Varane couldnt get him.

Shooting: Dont metter if you shoot with the right, the left, or the head --> everything is a goal.

Dribbling: He is agile. His turning is very fast. Sometimes you better use the L2 to push the defnder and then turn and use his big pace. Its so overpowert

Passing: Its ok. He isnt the player to make passes like Modric, Pedri or Xavi, but its not bad

Nothing. I dont noticed any.

Hi, today I am going to present to you my review of Didier Drogba 92 Icon Moments. So where to start ... I bought it on the market for 200k which I consider even a fair price because I needed a high icon striker. I checked him for a few matches and was a bit disappointed. To the point. The pace is good for that, I have no objections, shooting ... the point that disappointed me ... his long shots are a lottery, once he will shoot a beautiful screamer and once he will shoot the ball outside the stadium, close-up shots are ok. Weaker leg... well. is a lottery, don't feel it 4 stars, rather 2/3. Passing is even okay, dribbling is ok for a player like that, defense doesn't apply, physicality is good. In summary, he is good, but you should not shoot him from a distance and with a weaker leg, for this price there are currently much better strikers, overall 7.5 / 10.

82 AGILITY AND 80 BALANCE (ITS GOOD FOR PLAYERS LIKE HIM)

PRICE, FOR 200K U CAN BUY A LOT BETTER STRIKERS THAN HIM