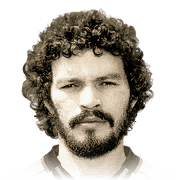 -
Sub out
Upcoming Matches
P. Chemistry
Squad chemistry
ST
87
RW
88
LW
88
CF
88
RF
88
LF
88
CAM
88
CM
85
RM
88
LM
88
CDM
69
CB
61
LB
67
LWB
70
RB
67
RWB
70
Reset
Basic
Sniper
Finisher
Deadeye
Marksman
Hawk
Artist
Architect
Powerhouse
Maestro
Engine
Sentinel
Guardian
Gladiator
Backbone
Anchor
Hunter
Catalyst
Shadow
Comments
Reviews
0
/600
Click here to verify your account in order to comment Update my avatar Dos and don'ts
Top Rated
New
Controversial
Show comments
Top Reviews
Only logged in users can submit a review
A review must be written in English
At least 200 characters are required.
Compare this player to other similar players you have used(optional).
If you import your club to FUTBIN or send us an image with the player data(fill the form below) your review will be marked as verified.
Include what you liked about the player in the pros area and what you disliked about the player in the cons area.
Your review will be manually checked during the next 24 hours.
Chem Style Used
Formations
Position
Rate Player Base Stats (1-10)
Pace
5
Shooting
5
Passing
5
Dribbling
5
Defending
5
Physicality
5
Most Used In:
Submit Review

5.0
The Doctor To Treat FIFA PTSD
24 users liked this review

Every year I say mid or prime Socrates with hunter chem style is the best icon second striker in the game, yet nobody listens. This year, I can finally afford this cult hero and found him even better. Almost all teams I played against use Marquinhos + Kimpembe or Varane or Alaba and these physically weak center backs stood no chance confronting him. Doctor just bullies every single defender like Ibrahimovic. Don't get scared away by his low balance, his High/Average+ body type plus long legs and 192cm in height makes him such a tank. Actually a Gullit style tank, not a Lukaku or Haaland type of tank. He's so huge but because of the icon buff and excellent all-around stats, he's not that clunky at all. Also 5 star weak foot is a big thumbs up cuz he literally finishes every single chance you create for him. To be fair, Kaka is even worse than the doctor. Just enjoy some of the goals I scored with him.

I wrote a mini review in the comments after 10 games, but after another 100 games and buckets of goals and assists I've realised the Dr. really deserves a proper love letter - so here it is.

This man is, hands down, the most undervalued card in the game. As an icon, he would easily be worth at least his current price (just over 500k) if he was from Vanuatu, but the fact offers Brazilian green links and still so cheap is just insane! This man should cost more than both Kakas, at least as much as Baby Dinho.

If you need to score a header, he will score it. If you need to score a finesse, he will score it. If you need a delicate little clip over the keeper, or a poked finish from a cut back, he will score it. And if you need a 25-30 metre thunderbolt, while turning and being wrestled by Kimpembe/Varane/VVD HE WILL ABSOLUTELY OBLITERATE THE TOP CORNER...and your opponent will never see it coming. Time and again they stand off Socrates, thinking he's too far out to do anything more than win a corner, and time and again they're wrong. I routinely finish matches with 4 goals, compared to an xG of like 1.9, because this man scores chances that don't even look like chances. And all of these things are done with either foot.

Add in a passing ability that so far only KDB has been able to match for me, incredible size & strength, a magnetic touch/perfect composure that allows you to hammer the ball at him under pressure without fear, and you have one the most potent attacking weapons I've used on any FIFA. And I'll tell you what, the dribbling really ain't half bad either. Baby Cantona is 1.1m, and that should be Socrates' starting pointing because, just like Eric, he is the complete ST/CF/CAM.

Do yourself a favour and get him in your team. Also, do yourself another favour and the right chem style - he'll never be an Mbappe, so if that's what you're after go buy someone like that instead. Play to his strengths (marksman, finisher, maybe even deadeye) rather than minimising his weaknesses (hunter, engine). I've tried him with both hunter and marksman, and he rarely beats the defence/goes past someone with pace either way, but with marksman he is noticeably stronger, smoother on the ball, and his finishing is even more deadly.