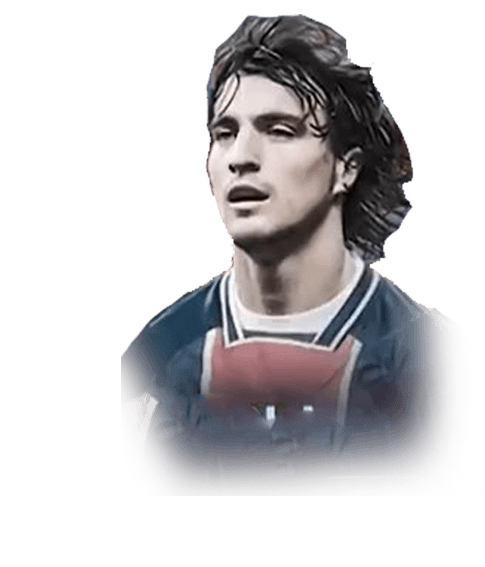 -
Sub out
Upcoming Matches
P. Chemistry
Squad chemistry
ST
88
RW
89
LW
89
CF
89
RF
89
LF
89
CAM
89
CM
84
RM
88
LM
88
CDM
72
CB
67
LB
70
LWB
73
RB
70
RWB
73
Reset
Basic
Sniper
Finisher
Deadeye
Marksman
Hawk
Artist
Architect
Powerhouse
Maestro
Engine
Sentinel
Guardian
Gladiator
Backbone
Anchor
Hunter
Catalyst
Shadow
Comments
Reviews
0
/600
Click here to verify your account in order to comment Update my avatar Dos and don'ts
Top Rated
New
Controversial
Show comments
Top Reviews
Only logged in users can submit a review
A review must be written in English
At least 200 characters are required.
Compare this player to other similar players you have used(optional).
If you import your club to FUTBIN or send us an image with the player data(fill the form below) your review will be marked as verified.
Include what you liked about the player in the pros area and what you disliked about the player in the cons area.
Your review will be manually checked during the next 24 hours.
Chem Style Used
Formations
Position
Rate Player Base Stats (1-10)
Pace
5
Shooting
5
Passing
5
Dribbling
5
Defending
5
Physicality
5
Most Used In:
Submit Review

So many icons i have used in past Fifas have always had a downside, unless you are talking the top 5 bad boys every other icon you have to sacrifice. Perhaps they are very one footed, maybe they have 3/4* skill moves or their workrates let them down. If its not that its their body type you just cant get on with. Whilst i appreciate Ginola isn't technically an 'Icon' card he gives me a 3 way link to Mbappe and a 2 with any Ligue 1 card which makes life great for team building.

Ingame he is like Geroge Best combined with Cruyff in terms of animations and play style. His skill moves are as fast as Mid Ronaldinho (Faster than Neymar, Mbappe etc) and so he makes him a nuisance to defend against.

I play him at ST or CAM depending on situation but honestly, an icon-ish with 5* 5* that is fast, is strong and can dribble with insane finishing...i've never had it all before. I paid 1.4 million with no regarets, he's is my 2022 Club Legend :)

If you held a gun at my head and said pick something it would be Stamina because come April every rigged card has 99. Then i probably wont be playing in April lol

All games played where in fut champs finals, he played right striker in a 41212(2) on stay central and stay forward, full chem with an engine. In the 8 games played, i got 8-0, and he was a big reason for that. 8 games 18 goals and 7 assists for me.

He has been far and away the best attacker I've used in this game, and with that list that means a lot.

Best finisher I've used in this game, silky dribbling and the 5 star 5 star makes him so unpredictable.

He is very strong and wins so many headers.

Even his passing is pinpoint with the chemstyle, R1 + x passes are like lasers with him (or i think RB + A on xbox).

Lethal first time shots and his finesse shots from outside the box are also very effective (even post patch).

His really good defensive stats for a striker combined with him being 6'1 allows him to get the ball back so easily from defenders, I've scored a few just because of his defending weirdly enough.

Shooting from anywhere, any angle

Strength even against big defenders

It's been a long time since I've written a player review, but I thought I should write one to help anyone thinking about buying Ginola.

I took the plunge and bought Ginola for 1.4 million after watching his price slowly rise up from the initial release. At the time I thought it was a lot, but it looked like a bargain given how good he is and that his price rose to over 1.7m.

A few points to start. I play in Div 2 and usually get my 8 wins in champs then throw the rest. I've used a lot of strikers this year such as Son, Neymar, Mbappe, CR7, Messi, Baby R9, Mid Eto'O. Ginola may be better than all of them, at least for me. I previously played Ginola at CAM behind CR7 and Mbappe and although he was great, I had heard he was a better striker, so I tried him there (With Hunter as the chemistry style).

The main highlights for me with this card were

- 5*/5*, obviously. I'm not a crazy skiller, but there are a few moves (Sombrero flick, elastico, the new spin move) that I use often and of course, Ginola can do them. It's also very reassuring to know you can smash a shot in with either foot and not have to worry about getting onto his left.

- Pace. With hunter, his pace reads as 99 Acceleration and 99 Sprint speed. I've always been kind of uncertain on whether chem styles really affect pace that much, but Ginola can certainly fly by a pacey center back to catch a through ball.

- Shooting. As mentioned above with the 5* weak foot, his shooting is great on either foot. Power, finesse, volley, scores all types of goals for me.

- Passing. Strikers that can pass are always nice to have, especially with midfielders that can shoot in the team. Ginola can pull off those max power through balls you just hope make it up to the runner pretty easily.

- Heading. I had CR7 and he's probably the best header of the ball I've used, however, Ginola isn't that big of a gap behind him. At 6'1 with 90 jumping, I've scored a fair number of corners and crosses with him.

- Lastly, dribbling. Very agile on the ball. Not like he's Vini Jr or Mbappe, but he can easily get around a defender with some tight dribbling. He seems like one of those players that can just recover the ball off a tackle when he has absolutely no right to do so.

Overall, I think the price tag is completely justified. Being French and strong linking to every Ligue 1 player is of course a huge plus, but the only player in this game I've used that stands out to me more than Ginola is Mid Zidane, and for 1.4m at the time of writing (Will probably be way less after the Hero packs go out in December) I think he's one of the best cards you can buy.

Maybe stamina? I generally sub out my strikers towards the 70th minute to get some pacey players up front in hopes I can steal a goal back, but he can easily play the full 90 if you don't run him back all game.