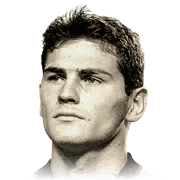 In my very first ever review we will be looking at the baby icon version of Real Madrid and Spain legendary goalkeeper Iker Casillas. I insist on using him despite how absolutely terrible this guy performs in-game due to the fact that I got shafted in the first Baby Icon SBC. I was keeping it to myself until last game, where Casillas conceded 4 goals from outside of the box in a single game.

Even though it is imperative to look at a player's in-game stats in order to review him objectively, I don't want to get too much into them as they're deceiving. I expected a solid/reliable goalkeeper. However with Casillas the only thing that is guaranteed is multiple headaches.

If you have a lot of liquid coins in your account and for some reason are looking into this newly released GK card, please please please just use whoever but Casillas.

This review refers to Iker's performances in Division Rivals (1st Division), and FUT Champs. I must admit he performs well in Battles, so if you feel like splashing the bank for a SBs GK, then you do you.

He does have one spectacular game in every 20-30 matches, I must admit. However, he will be the main reason for any defensive mishaps in at least half of your other matches.

Absolutely everything about that guy is a con. DO NOT USE HIM!

He is pretty decent, nice animations, stats and links but 265k for him is just not worth it. But if you are his fan he might be a nice option.

HE IS AN ICON

I got him from the Icon SBC. I really tried to like him because I love Casillas the player. He's one of the greatest and most consistent keepers of all time. However that's far from the truth in Fifa 22, he's dreadful. I've mainly used Mendy or Lloris, they are prone to occasional bad goals. With Casillas its constant. If the opponent shoots it straight at him from 40 yards, half the time he fumbles it, sometimes it goes straight to their striker who scores. You might be thinking well they are powerful shots, trust me they are not, even bad finesse shots where it goes straight at the keeper, he just decides to punch it out or tip it over the goal. He's only an inch shorter than loris but feels like he's 5"2. I don't think I've ever had Kante score against me from outside the box, but this happened multiple times when I had Casillas in goal. His animations look quick and fast but he's always too short to reach the ball. He's a constant liability, I'm going to pop him into any sbc I find since he's that useless for me.