I've been fan of Rooney ever since i can remember. When i saw he was getting an icon, i decided to buy FIFA 22 because i had to play with him. I traded and got enough coins to buy his mid for 1.1 Million coins. He is worth every penny. Before finally buying Rooney, i played with Mid Cryuff, Eto'o, Mid Puskas, Mbappe and attackers like that. Rooney beats them all. He isnt as fast as Mbappe, but hes fast, got insane strength ingame, crazy dribbling and a shot you can rely on. 3* skill moves doesnt make a diffrence. I dont feel like i need the 4* skills when playing with him. His weakfoot is like 4.5*

Overall, he is extremely fun to play with and i really like him. I dont think i will ever sell him. If you've got the coins, i would really recommend him as a ST. I play in 4231, 41212(2) and most recently 352. In 2 striker formations, i used IF Mane, which is another quality player, but not same level as Rooney.

I used Engine chem style on him

Some would say his 3* skill moves is a con, but for me, i dont feel it. His dribbling ability makes up for it. 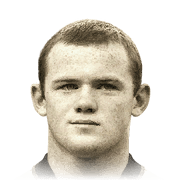 In fifa 21, I was a D1, G1 player, who used a full attack of 5* skillers. In fifa 22 though, skills aren't as important. I've been playing a 4-2-3-1 with Rooney at CAM, Saint-Max ST, with Martial and Mahrez on the wings, so those skillers were enough for me. I tried Rooney's base card, and was blown away. So I sold my Varane and Kante and bought the Mid. This card, is the best card I've used all game, and ...
Read full review
0
/600
Click here to verify your account in order to comment Update my avatar Dos and don'ts
Top Rated
New
Controversial
Show comments