Mixed opinions about this card, he is class some games and terrible others. I have used him in a number of different positions with a number of different chem styles and he just isn't cutting it for me. This is just my opinion but I would preferably look at other options for a cheaper price.

I was fortunate to pack pull Kenny untreadable from a base/mid icon pack and let me tell you I was super happy getting him as Kenny is known as a beast on Fifa but just haven't seemed to get the most out of him for the kind of stats he has on his card. now I know this seams a bit weird to say but I would honestly just play gold martial over Kenny. I have had more success in the ST position with martial than I have with Kenny.

I am no at Div 1 meta player or even for that matter an elite division player but I still have somewhat skill at the game to be able to use players to their somewhat potential in game. hope this helped you with your decision on whether Kenny is someone you should be looking to get into your team.

Conclusion: For a player that is worth 950k their are just better options in my opinion even for a cheaper price. no need to splash out on Kenny when there are players that can do the same job if not a better job for a smaller price.

1) Attack positioning is really solid in game, gets into the positions really well which is something to have on your strikers

1) Physical presence isn't there even with them style boost

2) Finishing of 92 is a LIE! I have played 11 games so far and only 8 goals have been scored by Kenny with half of them being EA tap ins 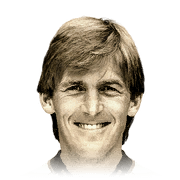 Kenny Dalglish on his days for Liverpool was a machine scoring from everywhere on the pitch, and let me tell you this card goes beyond expectations. im a div 2 plyer atm in div rivals and I used Kenny as a lone striker in a 4231 formation in WL for one match and my goodness he was a game changer and a half grabbing the match-ball with 3-goals against an amazing opponent with Kimpembe and baby
Read full review

Had to get this guy to save my weekend league and oh boy he has done that, and on top of that he got me to elite division paired up top with Son.I used Kenny as a right striker in 41212 (2) formation. He feels very similar to Ben Yedder on the ball. Very agile, top dribbler. His finishing then is something else. With the 5* weak foot he doesn't miss a single decent opportunity given and scores s...
Read full review
0
/600
Click here to verify your account in order to comment Update my avatar Dos and don'ts
Top Rated
New
Controversial
Show comments