I packed Ashley Cole 87 in a Base/Mid Icon Pack a coupe of weeks ago.

Naturally, I wasn't thrilled about this pull, but I decided to at least give him a try. I put a Shadow on him and tried him out in Elite Rivals (1750-1850) and weekend league.

I haven't removed him from my team ever since. By now, I have played over 100 games with him and I must say that I am very happy with his performance. Before I packed Cole, I used Theo Hernandez IF. Is Cole Mid worth 150k compared to Theo IF, Davies POTM or some of the new promo cards (Tierney, Delaine, Cornet etc.) .... probably not for most people.

However, for me he is and I am very happy that I have him in my team. Defensively this guy is an absolute monster.. His reactions and composure are phenomenal as well. In terms of passing, dribbling, and pace with a shadow he is quite decent too. And most importantly, there seems to be some kind of icon bonus. He intercepts passes like no other fullback I have tried and he just doesn't lose any one vs one tackles. The only con is that he can't catch up to mbappe, vinicius etc. once they got past him. But if you know how to use him, that doesn't happen too often. 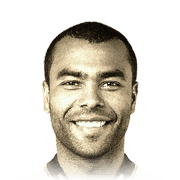