This card looked too good to be true-it was however very true.

I picked him up about an hour after hero launch for 363k, Mendy, Oblak, Million-toes, Lllorente and De Jong had to make way but the coin pile is already under construction for returning them to the nest.

Thus the somewhat weak team you will see him in via the URL.

Opted for a Hawk which led to:

Positioning: 97 Finish: 97 S Power:99 Long S: 96 Volleys:88 Pens:93 - Power felt like Roy of the Rovers stuff - expected the net to break once or twice. His positioning was A1 and missed only one clear chance in the handful of games i have used him (mixed rivals and world class single) The one miss came off a volley from 12 yards or so. The ease he glides off cb's with on corners is astonishing. Longest shot i tried was around 32 yards and it flew in versus 85 keeper on World Class. 10/10

81 on the short passes is around what you'll need, felt good enough, had no occasion to try long passes yet barring one cross which did not reach its back post target. This guy needs to be central and the focal point of your attack- he leads my 4 man diamond of 3 cams and a striker (Mid Nakata, Fekir and Modric behind him) If your doing a "Harry Kane thinks he's a cam" stuff then this is not your card.

Well rounded and the stats felt better than their face values. Everything green here with the standouts being Reactions:87 Composure: 87. The lowest is balance:74 but felt more like 85 - no issues were had 8/10

DEFENDING: Woefully red, but not his job right.

Will give him a four on the strength of the fact that thanks to 96 heading acc in combination with 99 jumping he will clear the odd corner safely for you. 4/10

PHYSICAL: This man has had his porridge and spinach.

Jumping: 99 Superman stuff, Stamina: 85 - has not tired at all in any game yet, Strength: 95 will brush off most Cb's - wrecked Million-toes with anchor in two online rivals games Agression:84 - wont shy out of stuff - more than adequate rating. 9/10

THE OTHER BITS: All good here

6 foot 1 - ideal ST territory. 4 star 4 star - felt great on weak - finished clinically on all attempts, flair pass came off, flair finish came off and some nice jinks. High medium feels absolutely fine and will use his physicality to pressure lost balls in opponents half thanks to the medium defence. Stamina will keep him doing it for 90 mins.

The trait power header is incredible on this guy- an utter dominator in the air and your corner goal tally will go through the roof, he gets his head on pretty much every ball you aim for it.

Only other trait is A.I chip shot.

5 goals in 3 games on rivals so far

Better than icons in the 600k plus price range by some way, possibly the best early season special card ST i have ever used.

Head of the class in shooting, heading and positioning, Out and out ruthless number 9 -Headers insane , shot power insane.

Would happily pay the double of his market price.

Rock solid option till TOTY at least or Mbappe pack.

RTG material for those with that penchant.

None really, unless your playing some kind of weird tiki-taka total football and need your ST to do things he should not be doing. Possibly price at this stage of game for the average player could be a struggle but he is worth every penny. 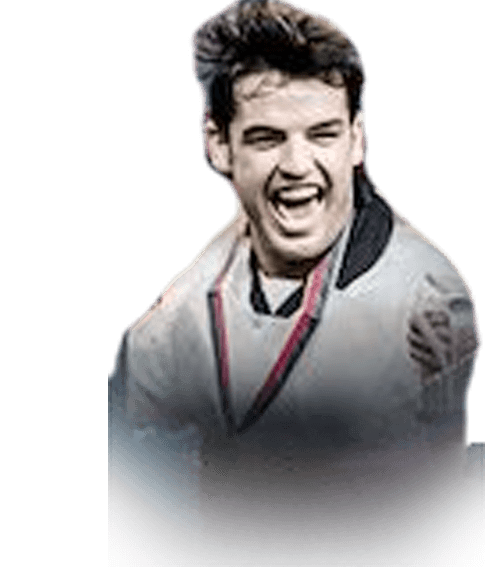 Please sir, can I have some Morientes?

FIFA 22 is a hard game to score goals on. I am currently in division 2 and the amount of games where it would be 0-0 at half time and end up 1-0 or 1-1 is crazy. That is... until I bought this beautiful Spanish man. It seems like this year the gulf in price between cheap meta and top meta is crazy - players like Mbappe, Neymar, Ronaldo are still crazy expensive, but your regular low tier ...
Read full review

Used his card for my qualifiers for WL and as the title suggest it was a 50 / 50 battle with him. Guy gets bullied off the ball and struggles to maintain possession. Only way to really use him effectively is by releasing the ball as soon as it touches his feet. He played well with quit 1-2's outside the box and throughout the field but then felt like a slug making the run into space after. Inside the box (not sure if it's b...
Read full review

I was really hyped for this card, but things didn't go as planned when I played with him. First I bought him for 274000 Coins which in my opinion is too much for him because he is like a bit worse than Benzema. I played 24 games with him and I scored 13 goals and 10 assists with him, which is okay. In Division, he wasn't enough for me because he just doesn't stand a chance against a lot of de...
Read full review
0
/600
Click here to verify your account in order to comment Update my avatar Dos and don'ts
Top Rated
New
Controversial
Show comments