Hello all out there!

This is my first review, but I felt like doing it, because even though the stats might not be one of an outstanding player (in terms of goals/ assists) this player does make his presence felt on the pitch.

I bought him around Black Friday with the intention of selling him when his price would go up. After a few days, his rating was up, so I decided to try him a bit in some games. First 3 games were not showing an outstanding player, but I kept him in. Then, he just blew my mind in some games and it remained in the team although I could've made around 80 k profit.

I am not dribbler kind of player so I am not to good with skills and dribbling, but with this player, I was able to do it even better than with Vini Jr (POTM). Finishing was also good with both feet and that pace... man it is outrageous. He never left the team again, and overall I am very pleased with his performance.

Nowadays, at the price that he is selling at, I would really recommend him.

Pace: This is speed bro

Dribbling: Even a player that does not dribble allot can do the job with Rodrygo

Shooting: If you get in finishing position, he will definitely hit the target

Passing: the receiver will appreciate his passes :)

Defending: he is not a defender, but if you set "Come Back on Defense" will will do some rebounds as well

Physicality: he is not strong, but very quick and with very good stamina

Not a strong player, but with his speed and skills you won't feel it 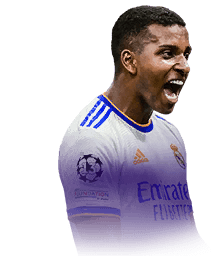 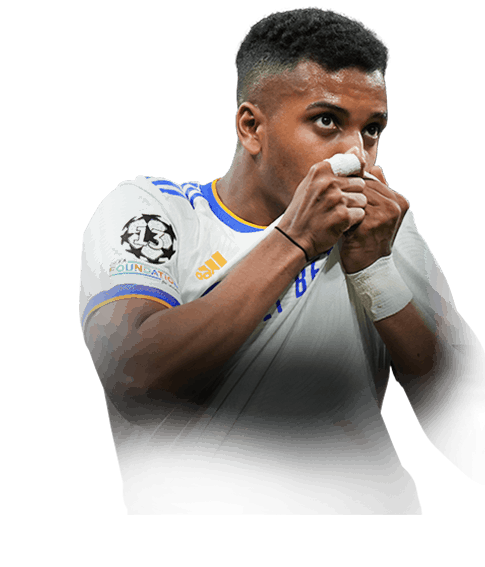 The Best Showdown Card Ever!!!

Where do I start? This card is phenomenal. He is extremely fast with 97 pace. Send him through on goal and nobody is catching him. His shooting is really good as well. He scores 9/10 chances you give him. His passing is great as well. He can pick his teammates out anywhere on the field. His dribbling is on another level. He is small with high agility and balance making him a perfect dribbler in this game. He can move in and...
Read full review

Rodrygo or the 'Other Brazilian winger from Real Madrid' is without a doubt one of the best attackers in La Liga, im playing him as a complete forward to play balls to Rashford and oh my word! Hes so good at passing, one of the best in the game from what ive used. He feels smooth on the ball, ive had some issues with his long shots but he still scored a screamer. Really good at ...
Read full review

Pace: 10/10Fastest-feeling card i've used this year. I've used Hakimi TOTY for most of the year, and have used Alphonso Davies TOTS since he came out. Rodrygo feels faster, not sure why but he does.Shooting: 9/10Shoots well on both feet. Haven't missed a clear cut chance since I got him. Excellent shot, Only reason it isn't 10/10 is because he doesn't have that natural shoot from anywhere can...
Read full review
0
/600
Click here to verify your account in order to comment Update my avatar Dos and don'ts
Top Rated
New
Controversial
Show comments