I completed the mid-icon sbc and I found him: Baresi, the goat of the defenders. At first look I wasn't too happy about packing him but since I am a AC Milan's fan I decided to put him in my squad for fun. Of course I could not let him play with 69 pace and 79 strength so I slapped an anchor on him (shadow was too expensive) and started some division rivals matches. (I play in div. 1)

Now, I know that almost 80% of futbin reviews are like "OMG HE IS INSANE, BEST ST IN FUT" although the card has 45 shoot and 12 agility, but in this case I have to be sincere; Baresi really surprised me. In game that 69 pace doesn't feel true, I would say it's an 80, both in acceleration and speed. He feels agile and has a quite good ball contro thanks to his body type. His passing is nice, I usually don't make long passes with CB and for passing the ball to TS and CDM, 85 and 84 are stats that I felt true in game. But now let's talk about the real power of Baresi: the defense. His defense is really fantastic, he barely lose a contrast and every time I try to make a standing tackle he always catches the ball. EVERY TIME! His 94 defending feels like 98, really. If he put the leg between the two of the attacker, he will always win the ball and it will remain in his feet, ready for building a counter attack.

His physical is maybe the only problem of him. He is too short for a CB, especially at this point of the game, 176cm is not enough and furthermore he doesn't jump too much. That 80 of jumping could also feel true but he wins a header in defense only if he stand in front of the attacker and from corners rarely catches the ball. The strength is quite good, of course he is not maestro Kimpembe or Van Dijk that make you fall just touching them but let's say that Baresi wins the tackles 80% thanks to his defending and 20% for his physicality. Anyway he really stays well on the pitch, makes often interceptions and when I make a manual mistake e recover very well the position.

So, finally, he is a good CB. Of course for 129.000 coins he is not worth for the meta, but I think that if you are building a team for fun or you are just a fan of him you should try him, in games he feels much more better than the stats of his card say. FRANCOOOOOO

Pace is not either a pros or a cons 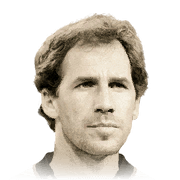 Okay so I packed this guy out of the base - mid icon SBC and boy was i happy to have a Mid icon. At the rating of 91 it should be a great card, right? Playing Div 2 and most of the time qualifying for Champions he could help me become even better.Well sadly, no. Even tho playing him along side Djalo, who is fast and reliable, he just does not cut it. He has his moments, being there at the right time, in...
Read full review

Hello and welcome back to my third review in this fifa, so today I'm gonna tell you about mid baresiI knew that he will not be fast, even with a shadow, but I thought maybe his height will help him alongside his defense, but I have to tell you that he is bad, even for a casual experienceHe is pushed by almost everyone off the ball, can't catch almost anybody once in a while he can make a decent tackle t...
Read full review

Baresi is one of, if not, one of the greatest central defenders to ever play and it is beyond disappointing the way this card has been set up. This card just doesn't make the cut, and the only real success I was able to find was to play him as a CCB and essentially use him as an impromptu CDM. He has the ability to man mark, but he is missing the aggression and pace to actually disrupt the runs that come his way. In stride ...
Read full review
0
/600
Click here to verify your account in order to comment Update my avatar Dos and don'ts
Top Rated
New
Controversial
Show comments