So i got him because back then there was no good Bundesliga left back option besides Rulebreakers Davies and Davies I didn't like (Shortly after I bought him, Nico Schulz released and Lahm dropped like 100k but whatever). But I've never regretted getting him, as he's just insane. I played him on Shadow cause you need that maxed out pace and Anchor wouldn't make him strong enough anyways.

Rapid. 99 Acceleration. 96 Sprint Speed with Hunter and it feels like it, he catches up to everyone on the Wing. Quite fast in offensive runs too.

Hasn't scored a goal in 99 games for me, but that's mainly cause i don't get into shooting situations with him. No rating

Only 4 assists, but his passing is good and gets the job done, he can make great passes to defenders or midfielders even under high pressure. The only issue is his 3* weak foot with a strong right foot, this makes his crossing not that good.

He is super nimble on and off the ball. His Dribbling def helps him easily stay with attackers when marking them. Also, very smooth dribbler with the ball at his foot. Def feels like 86 Dribbling should.

INSANE! He is just soo good at Tackling, def the best in my backline even though statwise he has the lowest defending (https://www.futbin.com/22/squad/3715618). His short legs don't matter at all, he'll always steal the ball from the attacker and then keep it (not like some defenders after whose tackles the balls just ends up back in the attackers foot). He also has gotten 0 cards for me in all my games with him as it should be, we're talking about Phillipp Lahm after all

Now this stat is a lie, he is obviously not very strong and wont bully most attackers off the ball, but with his great tackles he does'nt need to. But for some reason he is really good in the air, he just outjumps way taller attackers regularly and will win you the header and get the pass on target too. He also has 90 stamina, which is great, but due to his play style he still can get a bit fatigued if you play for 120 mins, but i guess that's most cards in the game.

So he has high/medium work rates, but this feels a lot more like high high. He will always push forward in possession giving your more options in attacking which i quite like. Then on the counter you first think: Fuck, he was way too offensive and is out of position now, but its actually not a problem because Lahm will sprint back like his life depended on it every single time and your back line is full again in seconds, he will easily just chase down any attacker who got in front of because of his offensive positioning. He's just racing up and down the pitch the whole match and def makes the most distance of all my players (he often has one of the lowest stamina bars near the end of the game despite having 90 stamina, man just doesn't stop running)

It just feels so refreshing to use him both defensively and offensively, he's lots of fun and has a unique style for a fullback, i can def recommend this card to anyone. He's worth the 300k he goes for in my opinion. You wont regret getting him. 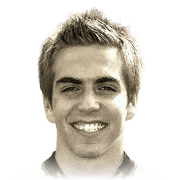