Hunter is the chem i went and Cam as position and led to the following:

I've already lost count the number of times he's banged one from edge of the D or slid in unmarked for a volley or half volley at the far post in rivals.

His finishing matches his stat for the most part and he wont convert everything especially not when in a body to body tussle as he shoots.

Penalty expert- make no mistake - also great free kicks (see other bits section) will turn an empty packet of crisps into a volley given a second (very fifa street or volta). 9/10

Passing: Intelligent cog in a machine

Beautifully rounded and extremely reliable - this is based on him being a cog in a like minded high end midfield. Will see the hard pass and not afraid to go for it.Great early crosses 9/10

Green all the way through and due to his nimbleness via body shape they play even better than the paper stats. Will turn on a sixpence and glide through narrow gaps while retaining balance 9/10

Yellow for the most with a notable low of 31 for aggression. Stamina: 84 and Interceptions:78

If you for one second expect to do the rough stuff with a 5 foot 9 piece of delicate machinery then you are deluded. Will keep running the full 90 and intelligently so. Will use his brain at times to cut passing channels with his decent intercepts - quickly regains positioning after committing to such an action. 5/10

The Other Bits: 5 foot 9 wont win you many headers but then again if your lumping it on his bonce your to blame anyway. Medium/Medium suits my need fantastically and his intelligence makes sure he commits at the right times. I play him on the right side of a 3 CAM 1 ST diamond and as long as the CAM inside him is high/high its all gravy and he will come into his own.

4 star/ 4 star feel like they work as intended- not less ,not more

Power free-kick and early crosser traits speak for themselves - he is excellent at both.

Huge value for money - 200k will serve you well till Christmas 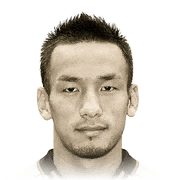 This card often gets overlooked because he's not a flashy player that people want for their team. I decided to give him a go and see if he is any good. Let me tell you 1 thing. He is a very solid card, especially at cam. Apply a hunter chem style and he feels more than fast enough. He has a decent finesse shot and tends to finish most chances that he gets. His passing is great, especially the over the top through balls. Due...
Read full review
0
/600
Click here to verify your account in order to comment Update my avatar Dos and don'ts
Top Rated
New
Controversial
Show comments