after spending a week on sniping I finally got this cracked card. I am a good trader and a pretty good Fifa player. I have to write my honest opinion about him, because he is on another level. He‘s my right striker in a two striker formation besides Ronaldinho or Messi and he‘s just another level! I‘m in Elite Division and about 14 - 16 wins in FUT Champz.

He is lightning fast and paces out every defender.

His dribbling is on another Level. This Agility and Balance Upgrade makes him just unfair. 5* skills makes it even better. I played R9 94 and had Problems with his dribbling sometimes. With this massive Agility/Balance Upgrade he just feels like a tall Messi.

His physicality is just phenomenal. He is enormously strong. Although he can easily push off every defender (Kimpempe, Varane,...)

I think R9 is the best Player in this Game. I played CR7 TOTY, Mbappe TOTY, Eusebio, but Ronaldo Nazario is another level! Even if he is the best Player in the game i think it‘s totally crazy to buy a Player for 15.000.000. It’s sad that most of the Fifa Players don’t have the Chance to Play hin. I personally love playing with him and won`t ever sell him ever again... 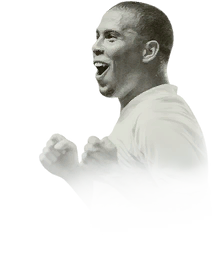 R9 Magical player - Before i start just the usual things to say:Elite division player (1950-2000 points "usually" / right now 1987)Futchampions 16-18 wins So before i get the idea to sell some players to purchase R9 moments, i played him in several drafts and i said to me "Oh Lord he won every single game for me. Just him".
Read full review

Hi, i am from Ukraine, sorry for my English!:) When i started to traid in this fifa to buy such cards, i didnt expect that i could earn for my squad, but i work hard on market so couple of days ago my dream comes true - and i bought pim r9 for 10.5 millions - most value card in game. I was happy and excited to ...
Read full review
0
/600
Click here to verify your account in order to comment Update my avatar Dos and don'ts
Top Rated
New
Controversial
Show comments