Ok, after got the baby version at the begining i had to do him when he came out on SBC' and i didnt regret.

my delpi play in the attack next to braitwhite, henry prime and maradona.

i have to say, hes everywhere when you need him' making runs inside, standing in the right position to give a pass to the strikers. great shot, the dribble is good inpite the stats shows,

and the most importent, hes just a pure attacker

pace: great pace along the the field line, there is something on the bodytype thats let him pass throw defenders and of course his speed dribble trait

shooting: don't need to add anything on the chemistry on is shooting stats, hes always in the right position, and with 5 WF hes shooting from everywhere. his finnese shots are fenomenal, almost like maradona mid on the other side of the pitch.

dribble: i had no expections from his dribble, but i dont know,maybe because of his traits or his height hes only second best dribbler on my team except maradona, his dribble isnt for walking in the pitch, but its great for quick and fast attack.

Passing: the best on my pitch, and with 5 WF hes just provides the perfect short passes, long passes, crosses, the ball just lay on the player feet for next move.

physicality: dont look at the stats, hes not pushable at all, bodytype and the fact the ball stays very close to his feets makes him very good for his position

vollyes are not so good, and his not for dribble are bit heavy for walking on the pitch. and his jumping are not good 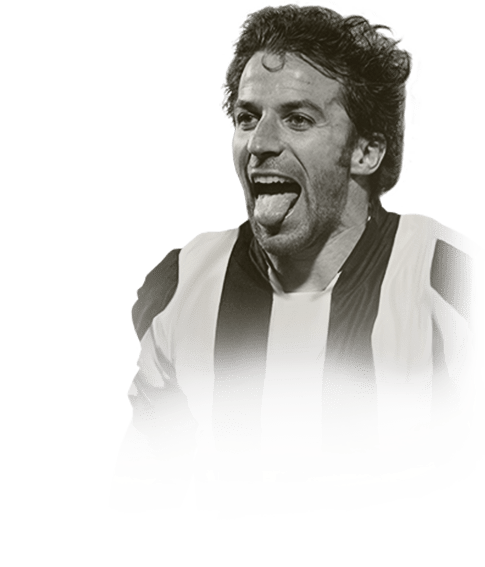 I packed Del Piero from moments SBC icon pack. And I wan't to do a review on him to help you guys decide is he worth your fodder. Let's start! First we will be looking at his pace. I'm gonna rate his pace 9/10. It's pretty good, but not the best. Shooting is 10/10 amazing finishing! Passing is also amazing. And here comes dribbling... he feels clunky, and it's hard to dribble with him. It's p...
Read full review

I did his sbc and thought I could help you out with your decision. He played ST and CAM. Start with his pace, I had a engine chem style on him and I would say at this point in the game for a striker it is too slow with CBs having 85 pace minimum but as a CAM it didn't seem to matter. His shooting is absolutely top tier, took a few random shots not expecting anything and it was in. Long range finesse or just a outside the bo...
Read full review

del piero is very good on the ball and has a powerful shot from anywhere on the pitch, if you are able to control his body type and get used to his pace on the engine he is the most ideal cam in the game. the card is perfect in a 4-2-3-1 formation with a fast striker or a hold up striker. Otherwise a truly perfect card with the engine.
Read full review
0
/600
Click here to verify your account in order to comment Update my avatar Dos and don'ts
Top Rated
New
Controversial
Show comments