I'll start by saying, when it comes to strikers I like tall, fast Target Man types, and I'm not so bothered by dribbling- that's the CAMs' job to me.

I Previously used Moments Calvert Lewin who scored 311 in 215 games for me, but lost his edge as the game progressed- Modeste is his successor.

Although I personally like him- he's definitely not for everyone.

He feels fairly quick- not as rapid as say Mbappe, but he has the pace to stay ahead of most defenders.

Dribbling is not quite as bad as I expected- I thought it'd be Lukaku level of bad but it's actually usable. Put him on engine and he'll have the agility to turn most defenders and the strength to keep them off the ball.

Passing again is a surprise- he's got neat close range passing and is particularly effective at doing short-range, lobbed through-balls which is something I do a lot

One of his best attributes- even without a chem boost he has the strength to hold off literally every CB I've encountered, and the height+jumping combo to get his head above theirs and score some bullet headers. Stamina is the only issue here- he gets tired quite early and I usually sub him off before 75 mins.

Irrelevant for a striker really but shit.

Overall, he's in my opinion a good striker. He's definitely not for everyone; If you're looking for a silky-smooth, skilful striker then look elsewhere- this guy is pretty clunky and thus doing skill moves with him just doesn't really look or feel right. If you like a strong target man however, I think he'd very effective. He's certainly not a game changer or a standout player, but he scores at least one in every match I play, and holds up the ball well for my other attackers if his own attacking options are limited. I'd reccommend using him on Engine to maximise his dribbling and passing, but Hawk and Hunter also worked for me too.

He's also got great links, I primarily did him to get my POTM Nkunku to 10 chem tbh.

Dribbling is very heavy and clunky 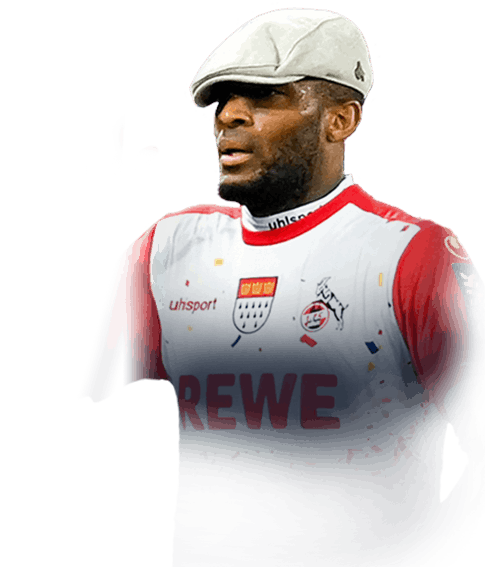 honestly a very good striker! when i first saw he's card i didn't think it would be good but i completed him anyways mostly because off his dynamic image. I've now played over 40 games with this guy an he is a beast no one can get him off the ball and his shooting is so cracked. His dribbling is a little stiff sometimes but not a big deal, he is probably one of the best strikers I've used in a long time
Read full review

one of the best finishers in the game

so I used him with 10 chem for 6 matches in div 1 rivals and i can say he is a really really good player but definitely not a game changer . he was so slow at times and not that good on the ball. if you want to get him and you don't have much fodder/coins at your club I do not recommend doing him . he can't be good in hard matches but definitely a fun player. great finishing he is one of the best finishers that I used this ...
Read full review

Did him because he linked to my new mbappe and I wanted to do every bundesliga tots sbc ea gave us. First 2 games he scored a hat trick, after that he just disappeared, he couldn't touch the ball and some games I forgot he was even there, he hurt the way I play a lot. He feels heavy and clunky and turns like a cargo ship. It is a nice dynamic image though and the price is really low. He would be 60k on the market maximum.
Read full review
0
/600
Click here to verify your account in order to comment Update my avatar Dos and don'ts
Top Rated
New
Controversial
Show comments