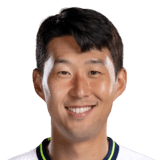 His real-life stats are currently 3 goals and 2 assists in 13 matches in domestic competition. He also received 0 yellow cards and 0 red cards.

I took this card from my fut ambassador loan player pick and man was i not disappointed! I used him at Striker in a 41212(2) and also tried him out in that CAM position. For the price that he costs i recommend you use him at Striker and not CAM so you can make the most of him. In 6 games he managed 7 goals and an assist which is actually pretty decent considering i tried him out afer playing like only 4 games of fifa 23. I used the basic chem style on him just to try him out without any specific boosts as i was still getting used to the game.

Anyway, heading into the stats and what this card can and can't do.

Pace : He does feel fast when running in behind but unfortunately he takes a while to reach his top speed due to the 85 acceleration on this card. However , pace is a problem on many players this fifa(not complaining, gets rid of the pace abusers haha!) Pace gets an 8.9/10.

Passing: Actually pretty good, he can make every type of pass, short pass, through ball, aeriel through balls, crosses, you name it and Son can make it! 8.5/10

Dribbling: Has the ability to drive through teams(which you'll mainly see at CAM) however, the tight and tidy turns are a bit more difficult to pull off. 8.8/10

Physical: He can hold off the weaker players and does last the whole game, but against the stronger players like VVD for example he will get bodied unfortunately. 7.4/10

Do i recommend this card for your team? 100% He is definitely worth the 170k you would pay for him and is a very good ,well rounded card. I think the engine chem style would be perfect for this card as it boosts the acceleration and balance which both need boosting. The shooting as it is now is perfectly fine.