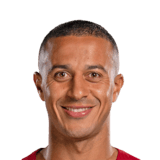 His real-life stats are currently 0 goals and 0 assists in 8 matches in domestic competition. He also received 1 yellow cards and 0 red cards.

So I found out the hard way that players with low PAC are actual beasts in this game. In my 2nd game I played in this fifa I played against someone who had plenty of slow, but high rated players, in particular in his defense and midfield. I didn't really think this match gonna be a tuff one... I ended up losing 9-2. Keep in mind, that I'm a division 2 / 1 player. That game actually was my biggest defeat I've ever had. I really was upset with my team, even tho it wasn't really bad. So this made me try using fodder players in Division Rivals. And Mr. Alcântara surprised me the most.

You just need to watch out not to let him make a forward run by pressing the L1 / LB button instead of your fast attacker because he probably won't outpace your opponents defenders.

Pace (but not really)