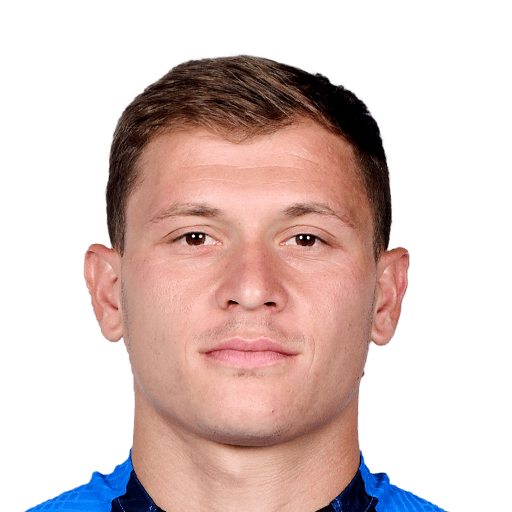 His real-life stats are currently 5 goals and 5 assists in 19 matches in domestic competition. He also received 4 yellow cards and 0 red cards.

Anyone who loved this card last year and reads reviews would remember that this guy was my hero last FIFA and I rated his cards very highly. Wondered at first how he would play this year seen as he's had a 2+ rating which was deserved. Anyone who follows the Serie A and Inter would probably question a few stats from ea...decreased dribbling, no boost to his skills or weak foot, but hey we have to make do with what we have.

I ran him at LDM in a 4222 with a Hawk chem style with his only instruction as cover centre at the top end of Div 5 and FUT Champs qually and I can happily say I'm already in love with this man. The other positive is he is performing so far this season so I don't think he'll be shy of an inform or 2.

He has played a big role for me in progressing and for a player currently 19k at the time of writing this review it seems to good not to do. Thanks to the new linking system also, you can link him with way better Serie A players compared to last FIFA. Anyway, into the pros and cons:

Also thank you for taking the time to read this. If anyone can comment feedback on this guys card on the review, how to improve etc any feedback would be appreciated.

Pace- Keeps up with the speed of games and can catch up to lengthy players on next gen gameplay.

***For anyone who doesn't know what a lengthy player is yet, its when a player has the lengthy acceleration type due to having 15+ strength over agility, over 55 acceleration and over 65 strength and being 5'9" or taller. This makes the player quicker than explosive or controlled players so dont be annoyed if Barella doesn't catch these players e.g. Haaland***

Shooting- Bit of a grey area I found. His shooting is not bad I will say but his long shots have been class. He's another player that does have the outside the boot shot but will register them sometimes if you input this. AI positioning is the same as last FIFA, where he will find space and support your attacks. Very high IQ player.

Passing- As far as completing a pass goes he can complete tiki taka passes, long passes, over the tops, the lot pretty much. I'll delve into his WF later but even passing with his left has been sound. Makes the pass simple with a good amount of power.

Dribbling- Needs a section higher than pro tbh, he's way too slick with it. Not sure how ea thought he deserved a downgrade from last year but apart from his actual dribbling stat in game, the others are either 90 or high 80's. Part of the reason I feel chem styles to boost dribbling are pointless for him because he's so good on the ball. Close touch/agile dribbling, running with the ball and turning defenders has been a breeze so far.

Defending- Controlling him whilst defending he has been great and even when pressing with the AI his defending has been solid. Stats are good enough to assert him as a CDM but if you wish to use a shadow etc I would recommend it depending on how you play. For me, he attacks so can't see the point but his base stats for defending in game have been fine.

Physical and Work Rates- 94 stamina w/ High/High work rates, high aggression and good jumping. Can't really comment on the strength, haven't seen him bully someone or be bullied because he either turns the player or keeps his balance.

3*3*- This is subjective to each player. Personally his weak foot hasn't been an issue and feels good but the skills are dependant on how you play. Personally I use skills so I use close touch dribbling to combat it instead. Sure you can use step overs but I feel the star upgrades would have took this card to the next level.

Height- Again subjective to each player. He has won headers over players like Renato and Kessie and I feel it compliments his dribbling and pace a great deal but I'll leave you guys with that opinion.