Dalglish is the first Icon (after Kloses WC Icon card) I packed in my whole UT career and since he is untradeable, I really forced myself to use him. In the first games, he wasn't really there, but after I changed my formation from 4321 to the linked one, he was such a beast next to Gomez. He is fast, he score from really every angle, he can hold the ball and is very solid at passing. I would rate you, to use 2 STs at all, because that was the main thing where Kenny begans to shine, like I said before. I'm happy that I don't used him as a fodder, like I've done with WC Klose (and I tried him out in many formations... sadly he was not good for me), because he is really nice! I play in Div4-5 most of the time (more like a casual, in the past, I played in div2-3 most of the time, but that was in the past). 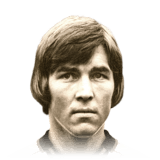