Like everyone else, I think we were all disappointed when the stats for this card dropped. Whether that because he didn't seem that much better than his Rulebreakers or because Varane's from last FIFA looked way better I'm not sure.

Saw someone's comment saying something on the lines of he's a very quick lengthy centre back where I realised he had 90 acceleration and agreed that maybe it's the new meta.

The way I saw the card was this could be a very fast Lucio, who is the best CB I have used s far this FIFA.

I think most peoples concern was, is he an upgrade to the rule breaker and is he worth 600k equivalent in fodder? My simple answer is yes, 1000%. Personally I thought the rulebreaker was okay, and thats pushing it. Already, we have all saved how many packs and there will be way more and fodder will only build, keeping in mind the sbc lasts for 30 days.

I used him at right cb in 4321 with a shadow chem style next to baby Maldini. He managed to help me reach 17-3 in the weekend league and helped me get 3/5 wins in elite where I am currently about the 600 skill rating. The goals I have conceded have mainly been due to the attacker scoring a solid goal but none were to his positioning, errors etc so defensively I think he's been sound which I'll get into the pros of his stats now:

Pace- 90 acceleration and 77 sprint speed. When do we ever see a CB with acceleration>sprint speed? For my next gen players who will have the lengthy acceleRATE, I'm not sure how EA have decided this was a good thing. When I mean no one, I mean no one, has beat him for pace to any through ball or whilst trying to run in on goal. Probably the best thing since sliced bread.

Passing- Stats are great for a CB as the passing is simple for them, just get play started. His passes have been powerful, direct and accurate, including when he is switching play.

Dribbling- Great agility and balance again for a CB with great reactions and very high composure. These play in very nice when he has a striker on his back and you're facing goal with the ball. The stats just allow him to hold the player off and make a comfortable pass out.

Defending- The one job I'd hope he's good at. His defending has been very aggressive, not as in he'll sprint out 5 yards and leave a gap, but when there's the slightest sight of the ball, he puts his body straight in the attacker and puts a graft in to recover play. His AI positioning has been great. Sometimes on previous FIFA's and this FIFA, CB's will switch their positions around and very rarely would with a cdm or full back which he hasn't done. Can't fault it. Also has 97 jumping which has really helped him win aerial duels.

Physical- Again, good jumping, strong, aggressive and has good stamina so you can abuse his pace when defending runs in behind. Also helps a lot because you can come across his part of the pitch and cover another area which doesn't affect his stamina much.

Links- Ligue 1 and PSG have some great players as usual so its not as difficult getting him chemistry. If you go for the nation links then you may struggle so its a bonus if you have Mbappe, or maybe a soon to be TOTY Hakimi...

Work Rates- The only reason I've put this as a pro is because the High/Medium has no affect on him at all unless you trigger his run. He'll stay in position and holds a solid line. I feel this is players big issue with him so please ease your minds about this.

Price- I honestly believe this is very good value. You cannot compare his value to sbc's like Jairzinho, Zidane because they're completely different cards and players have different needs.

I would say you could debate he is as good as or better than Lucio. As I said earlier, he is the best CB I've used and Ramos has been everything but better so far. Not sure if the pace has me by the rough of the neck but it makes a huge difference which I now players will fall in love with as quick as I did. 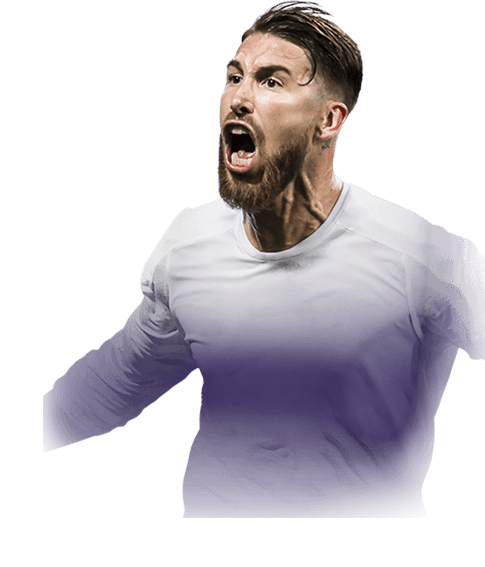 Where do I start, although he is high/medium it works out GREAT for him, he literally all over the pitch and barely leaves any gaps open, I was hesistant due to the price as most of you probably are but I assure you this dude is a BEAST on the pitch. Great strength, amazing tackler.
Read full review

Do him if you play on next gen because lenghty makes his sprint speed lot better. You can also do him on old gen but you can immediately see the difference on his pace without lengthy. 10/10 Card on Next Gen and on Old Gen 6.5/10 Card obviously with Shadow. Also for people who say he is overpriced compare him with Base Lucio and also the price and links.
Read full review

This year I had the opportunity to try various CBs, Lucio, Maldini etc. Forget about this players, this Ramos is the best CB I've ever tried this year and maybe the best all time I've ever used. The thing that makes this card so special is that he is full automatic, often you will find yourself with the ball without pressing any buttons. If you are on the verge and worried about the price, the only thing you h...
Read full review
0
/600
Click here to verify your account in order to comment Update my avatar House rules
Top Rated
New
Controversial
Show comments