Following the international break, TOTW 10 had some key headliners leaving me dreaming of a red CR7, Hazard, or even Harry Kane honestly; and I ended up settling for 86 Moreno as my best pull as is too often the case.  For this week CR7 was only about a million coins out of my price range and so we go with the next best thing in a man who has yet to fill Ronaldo’s boots at Madrid, Eden Hazard.  From a FUT perspective, even NIF Hazard looks like he would be the ideal player for FIFA 20.  Quick, agile, balanced, decent finishing, 4 STAR WEAK FOOT and 4 STAR SKILLS.  However, he is not a highly used card as many FUT Managers opt for different options.  I was interested to see if the new and improved IF Hazard would tip the scales as a must-have edition, deploying him as the ST and in CAM positions of the 4-2-3-1 in the following squad: 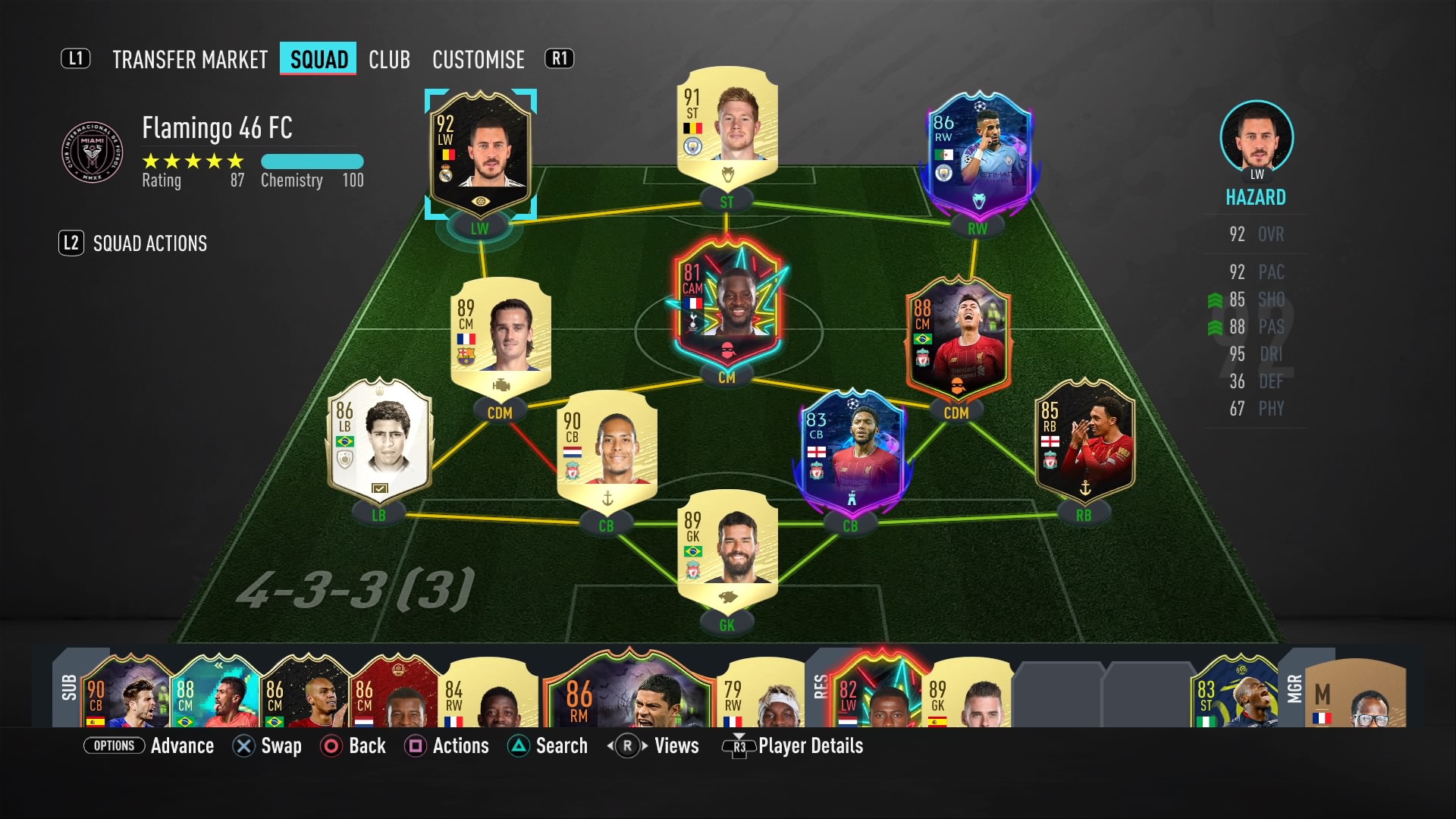 As we said, Hazard has some excellent attacking qualities making him a potent threat in front of goal.  The categories that stand out as needing improvement (Shooting & Passing) both benefit from the DEADEYE chemistry style and it was a simple choice in the end.  The chem. application left Hazard with 99 POSITIONING, 99 FINISHING & 93 SHOT POWER; this would obviously translate into a lot of goals, right?  Not exactly.  Hazard just doesn’t have the sting in his tail like other players I have reviewed of late … even more frustrating is how many of those chances were created from his other qualities (all 90+ DRIBBLING!).  Time and time again I would turn, twist, and fold defenders into knots with this man’s 96 AGILITY & 95 BALANCE, only to be let down by his “99 FINISHING.”

Lots of links here depending on which direction you want to take your team.  Belgium offers some excellent links in top leagues, Real Madrid has interesting options to put into the mix, and of course, La Liga itself carries some top names.

I want to say 5/5, but I just can’t.  Even as a wide man I found the same scenarios coming to life.  Beat a defender with skill, high quality turns into the box, place a pass for the would-be goal … a foot behind my forward to throw off the move. Basically, if you never have to move on the ball this card possesses sorcery in control that can send your opponents into next year if they try to lunge in, but that magic dissipates incredibly fast after you press pass/shoot.

I am combining these two categories as they both speak to one another; the price drives up expectation, the lack of a complete player drives down the worth of the card.  575k at the moment is not a ludicrous price, and perhaps the new patch will help a card like this in terms of passing, transforming him into a top tier winger.  But until then he is just a little high for me given the passing and shooting inefficiencies.  Furthermore, the strength on this card is also a huge weakness and you constantly feel on the run from opponents.  The dribbling comes in extremely handy here, but if you do run into a tackle the ball is long gone.

Quite often in Hazard’s career, there has been the expectation that greatness is just around the corner.  “He has all the tools” and it just needs to “all come together” for him to be “one of the best in the world.”  Yet, too often in Hazard’s career, there has been the letdown of multi-game spans without an impact.  To be honest, I found his FUT card exactly the same.  24 goals in 20 games is a decent return for a player not consistently in the ST position, but these goals probably came in about 9 games.  When Hazard clicks and the gameplay is flowing he can score 3 … 4 … and 5 goal games.  Followed by a hiatus of 3 games without a contribution.  These spans stood out more than anything and really deterred me from ending matches with the Belgian.  I can see the obvious potential within this card and had some matches that alone would have changed the tone of this review entirely.  But as a full body of work, Hazard didn’t quite meet the "galácticos" status of those who shone before him.  Cheers for reading. 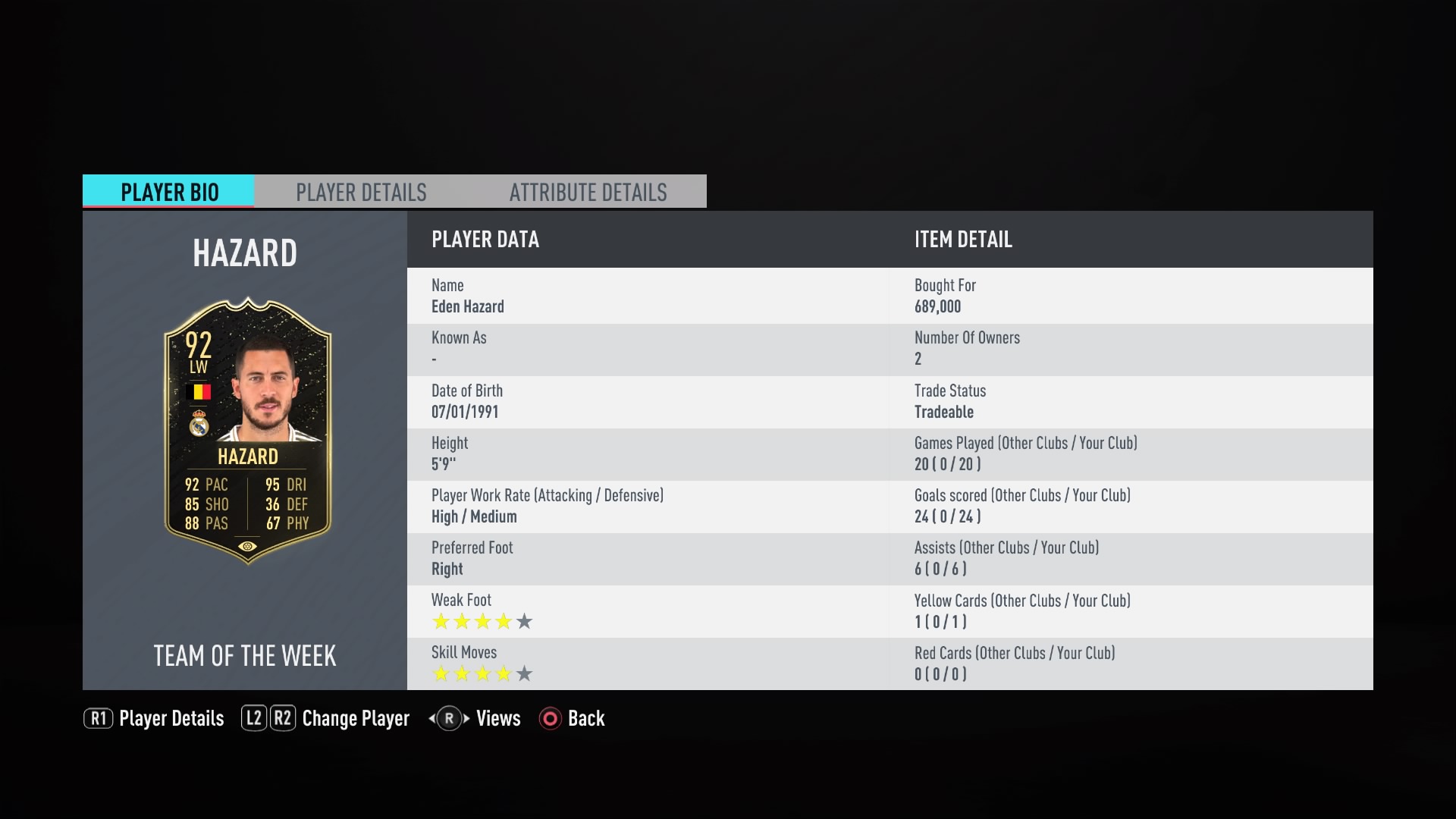