The Prime Moments ICONs are upon us and just as expensive as you would expect.  The difference in FIFA 20 is of course that each and every ICON has received their prime moment boost, leaving a lot of options for improving your squad until the end of the game.  In the end, my first Prime Moments ICON review comes more from a forced necessity then genuine love for the player.  If you tuned in to the Winter Refresh Zlatan review you would have known this review was coming as I couldn’t find a better way to fit the big man into my squad.  While Larsson was not first on my list, I definitely checked him twice as he blazed his way throughout the Weekend League.  Larsson was deployed primarily as a CAM in the 4-2-3-1 and as a ST in the 4-4-2 with the HUNTER chemistry style doing the business.  Perhaps it is fitting that the HUNTER card is symbolized by a viper given the venom this lad injected into my opponents throughout the weekend.  Larsson was the fatal bite in the following squad: 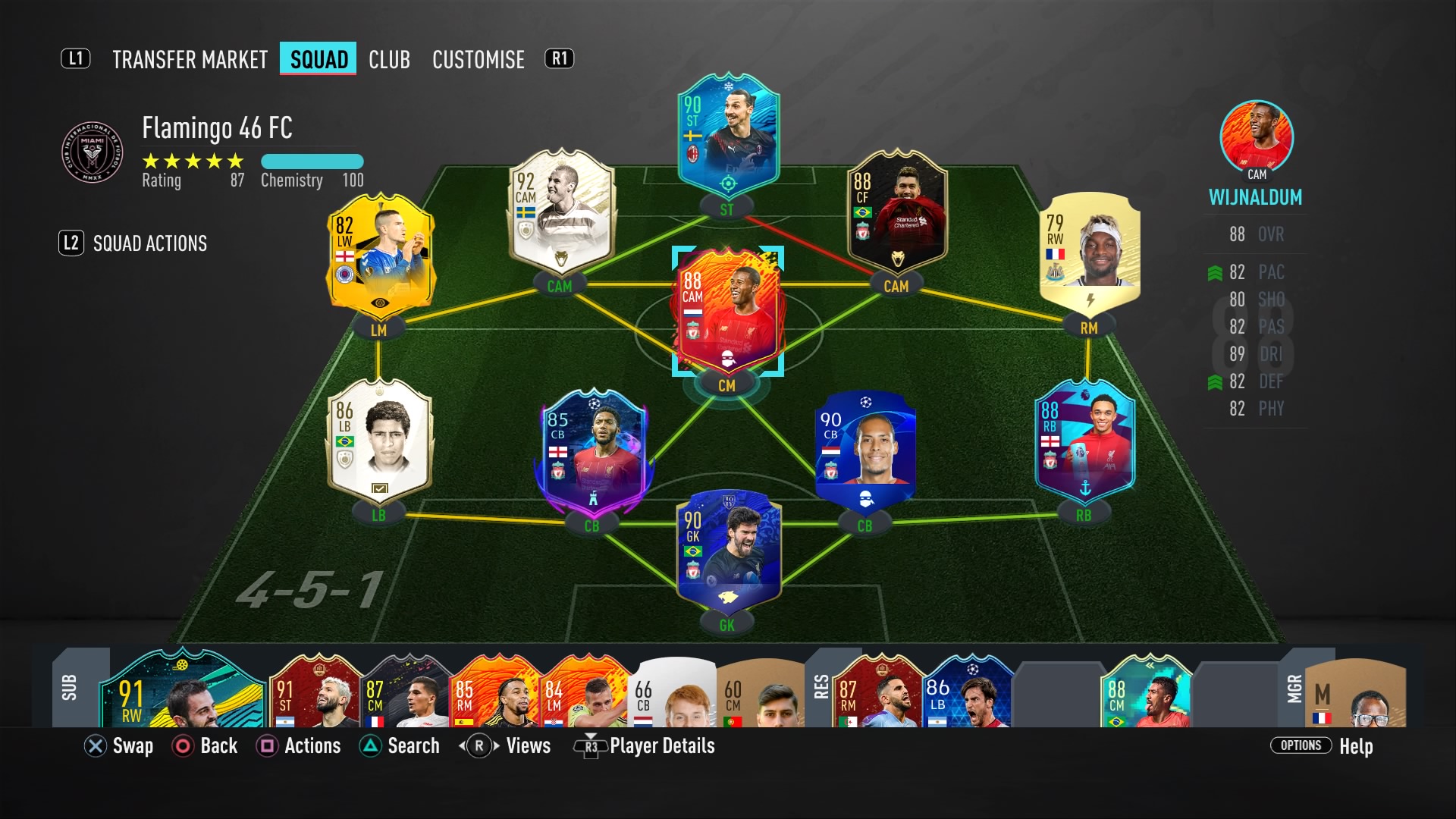 While I can see why some FUT Managers are opting for the ENGINE chemistry style I found the dribbling with Larsson to be more than adequate and was more impressed with the pace boost that HUNTER created.  Larsson was simply electric all weekend and came away with 31 goals for his trouble.  99 ACCELERATION, 99 SPRINT SPEED, 99 FINISHING, & 96 SHOT POWER all played as advertised; and even the 4 STAR WEAK FOOT felt like a perfect 5.  Larsson finishes everything and can create a lot of chances himself off of the dribble.  Larsson felt responsive and agile on the ball, and his dribbling was effective despite the 3 STAR SKILLS and even 85 BALANCE (which is still solid).  The ‘hidden boosts’ that some associate with ICONs seemed tangible in this card as he outperformed his statistics in every category.

I might have gone a perfect 5/5 if Ibra had been more effective, but regardless it is obviously easy to get this card into any squad; he just simply does not offer a perfect link to many hybrid options.
So take everything that was wrong with Zlatan this weekend, turn it on its head, and you have the brilliance of Larsson.  My first impression was, “wow this card feels insane,” and that confidence goes a long way in each individual game and overall throughout the weekend.  Larsson always made me feel like I had a chance to win.  The amount of goals was the biggest talking point, but the way he scored them is worth mentioning.  He can outpace opponents, dance in the box, score with both feet, and has decent physicality as well… just an all-around goal scorer.

Immediately I went for the 5/5 rating as you are paying a premium but getting a premium card in return.  But I just can’t shake the lingering feeling/knowledge that part of the premium price comes from the Prime Moments ICON status.  The dynamic images alone feel like they are worth 500k and that just puts Larsson in the slightly overpriced category for me.

One look at the 20 game stats and you can have a solid idea the deficiencies with this card; a grand total of 3 assists.  I would say that there are three factors that contributed to (I believe) my lowest assist total for a review outside of a defender. Number one, Larsson was too busy scoring goals to be bothered with passing.  Number two, when Larsson did find his targets they did not finish their chances.  Finally, number three, and more likely the prime reason, the passing on this card was not the greatest.  Not to say the passing was terrible, it just wasn’t anywhere near the incredibly high standard of this card.  It was like driving a Ferrari but the taillight is burnt out … doesn’t change the performance overall, but you are disappointed you paid all that money without perfection. 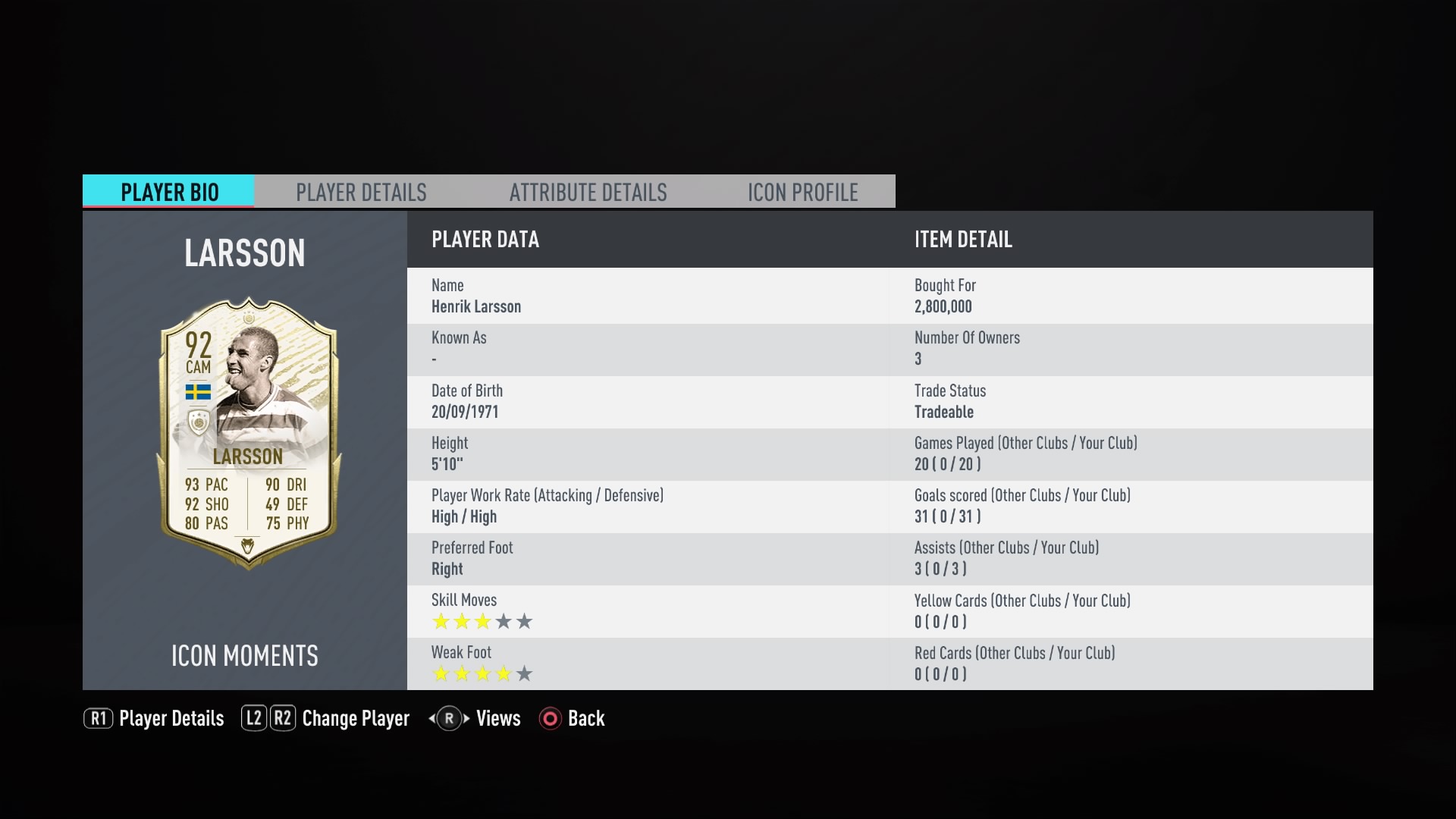