I am pretty sure Lockdown is officially over… if you follow me on Twitter @IVIaeday you will know I asked the question for this weekend’s review… Baby Eusébio or Flashback 96 Luka Modric?  In the end, the majority rules and it did make more sense to look at one of the newest SBCs currently available. However, I will throw out a few words about The Eusébio Experience at the end of the review.  Having just reviewed TOTSSF Kevin De Bruyne I felt I was in the perfect position to really speak to the level of quality you get with Flashback Modric.  One look at the statistics and you expect a quality player, but you never really know what you are going to get until you jump in with both feet.  After completing the SBC I knew I wanted to deploy Modric as the box to box CM in the 4-4-2 formation… and it just made sense to apply the pace and shooting of the HUNTER chemistry style.  And with that, Modric was ready to be the mini-magician all weekend in the following squad: 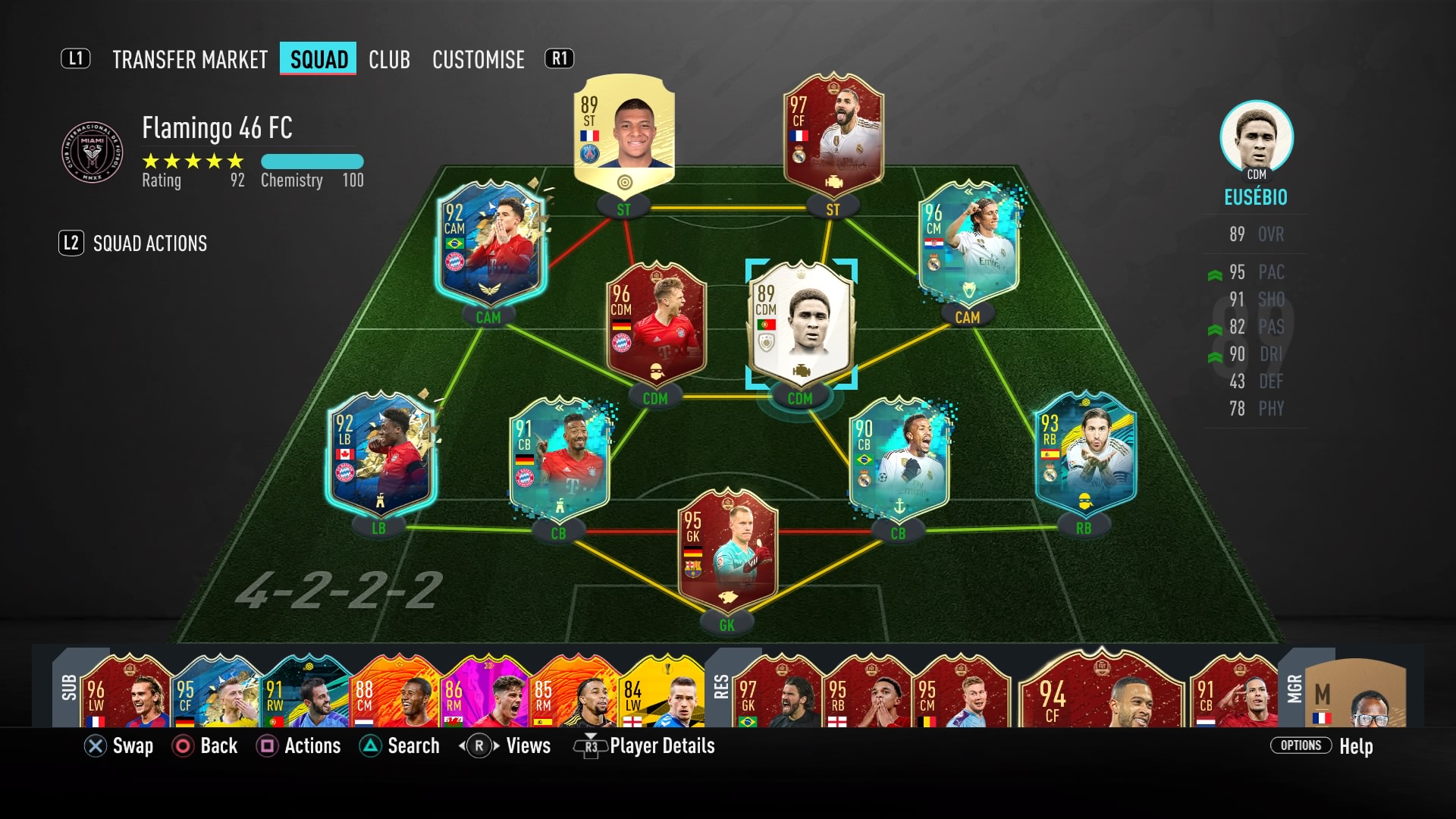 If you have been following along with recent reviews, you will know that I am giving Modric a very small, but notable rating above TOTSSF KDB.  However, I want it on the record that this rating is 100% based on their ability in the CM position … however, KDB is still unique in his ability to play a variety of positions, while Modric is limited to either a CM or CAM in my mind.  So what sets Modric apart?  First off it is the pace… Modric can literally set himself apart from KDB… and the majority of midfielders I have used, in the pace department.  The key with Modric is his 99 ACCELERATION, which was incredibly responsive and is the start of everything good he does.  The 9.9/10 Modric earned for dribbling is of course a direct result of the almost perfect dribbling statistics, including the FIFA 20 approved 99 AGILITY & 99 BALANCE, but none of this matters unless Modric is able to execute a dribble and then move away from the defender… enter the acceleration again.  But that is not the end of the acceleration conversation … a friend of mine who frequents WL and we often party up during our matches said it best … “He is literally intercepting everything! This guy is everywhere!!” You have to imagine the rage in his voice, but what he was referencing was the defensive prowess of playing against 96 Luka.  The 99 INTERCEPTIONS are no joke and again it is all down to pace, pace, pace and how quickly you can see danger, and move Modric to eliminate it.  His pace is everything.

I feel like a parrot recycling my last phrase, but again I want to put down a 4.5/5 for the links here, but I just can’t.  The Real Madrid links sound like they are getting even better (if that is possible) with the Summer Heat promo.  The La Liga links are endless.  But the Croatian links are just lacking a bit and holding me back from a better rating.

I was expecting the dribbling … was hoping for the pace … but definitely did not see the clinical shooting coming.  I think it was the 82 base FINISHING (87 with HUNTER) that was throwing me off… but while I was busy focusing on the negative, I was overlooking the incredible positives brought on by the 4 STAR WEAK FOOT and after the HUNTER chemistry style: 99 SHOT POWER, 99 VOLLEYS & 93 LONG SHOTS.  The result was a 12 goal return in 20 matches for Modric, a crazy return, but does tell the full story.  This weekend was riddled with issues for me, and I honestly felt Modric was on pace for 15 – 20 goals in 20 matches had those gameplay issues not arose in the manner they did.  He was involved in everything from the attacking standpoint and dominated both ends of the pitch for the majority of matches.

Fodder is not cheap at the moment, and this card is still only 300k and you get tradeable packs in return.  While I packed virtually nothing, there was still potential to make some coins back.  I don’t think I am going out on a limb by saying this is one of the best value SBCs this year… but I will go out on a small one and say that based on the stage of the game, quality of card, and end game strength… Modric is the best value SBC of the year.

With 90+ in all passing categories, you knew this card was going to be passing perfection… but I would say that he did not quite have the range and flare of KDB.  Another obvious with this review was that at 5’8 (172 cm) and with 75 STRENGTH that Modric might be a lightweight Larry out on the pitch.  But much to my surprise Modric summoned his inner Messi and was a tiny tree trunk around the ball and difficult to dispossess.  Were there a few times I wished he had a bit more size? For sure (especially on headers).  But overall the tackling & protecting of the ball was not an issue and really speaks to how well-rounded this card is.

In the end, Modric is class… get him ASAP.  Honestly, I cannot say enough good things about this review and how this card operates.  So, instead I want to spend 100 words on the aforementioned Eusébio Experience, starting now.  For 4 million coins I wanted a card that was beyond exceptional, capable of winning matches, and dominating opponents… and in Eusébio I got him.  However, during my rough patch this weekend, I realized that Eusébio is a “fair weather” player.  In good gameplay he would score 4 goals a match (5 STAR WEAK FOOT is insane) … and in bad gameplay, he would score 0. Honestly, I have not used a card with as much discrepancy between gameplay as this.  Maybe he was just SO good that I noticed it more… but at 4 million, it feels bad.  100 on the dot, and just in time to close the books on another weekend. Hopefully, the Summer Heat is sizzling and does not burn out too soon, and as for Modric, don’t hesitate to pull the trigger. Cheers for reading. 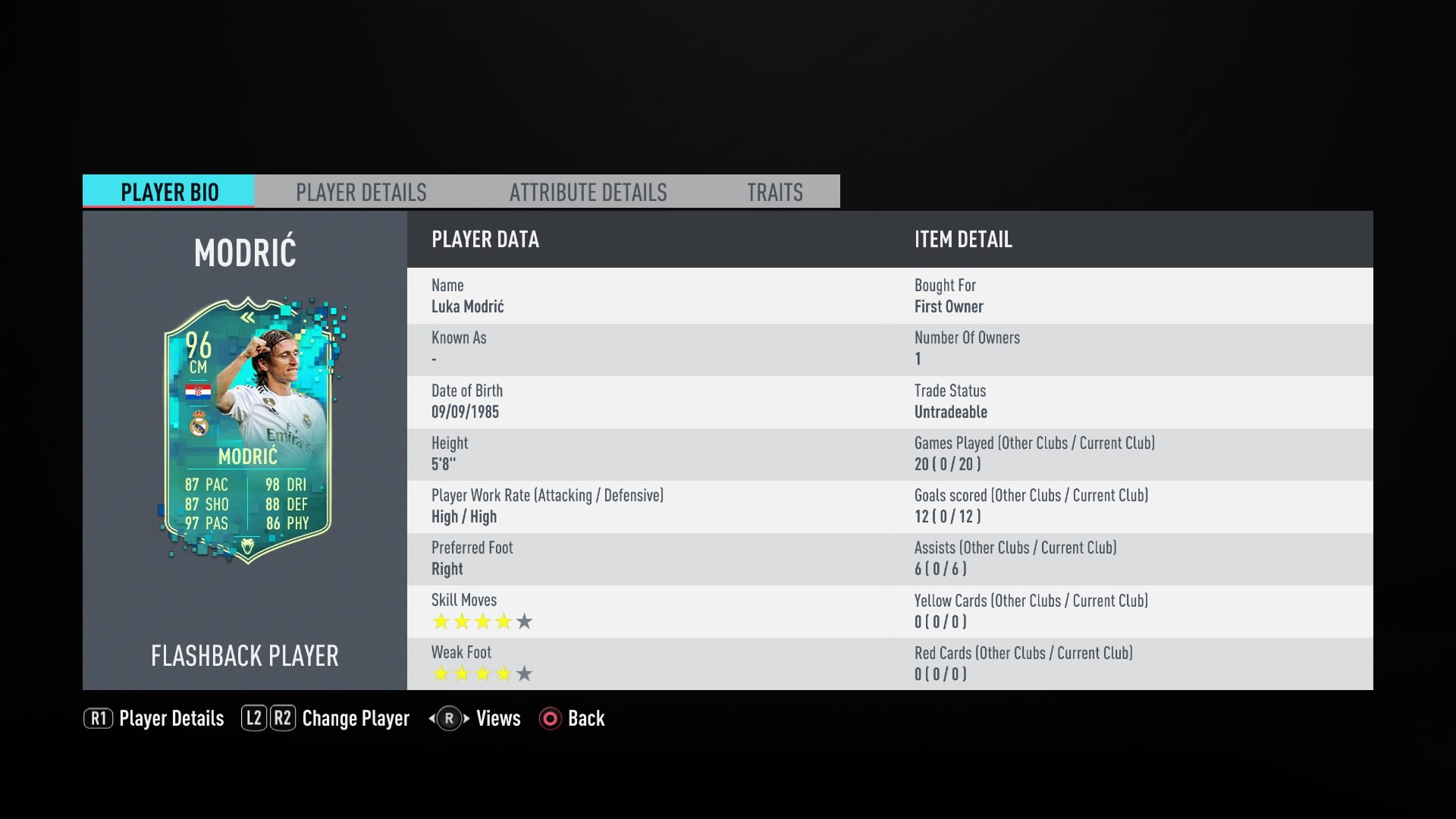 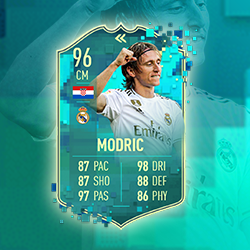 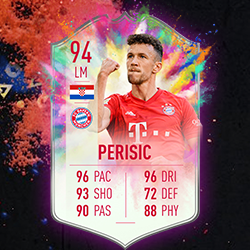 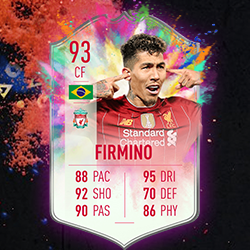 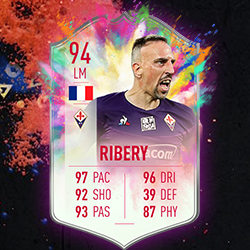