We saw an amazing side for TOTW 1 on FIFA 21, but we are about to outdo it after world class performances occurred left, right and center. In a week which saw Aston Villa beat Liverpool 7-1 and Tottenham beat Manchester United 6-1. We have no less than five players 86 rated or higher. 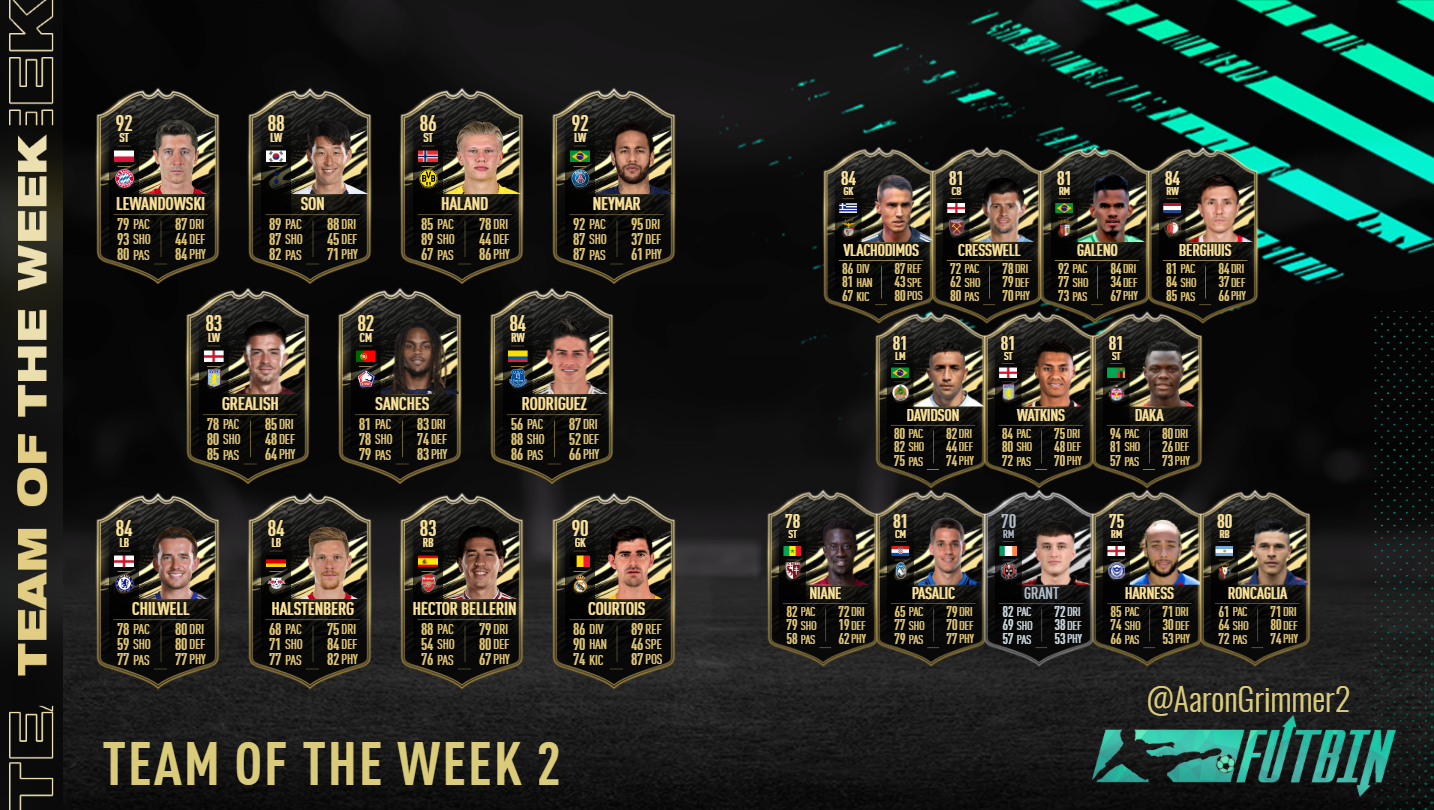 Thibaut Courtois – GK - OVR 89>>90
We start the prediction off with a big name and trust me there are many more to follow! Courtois has been a consistent performer for Madrid for a couple of seasons now and the Belgian picked up a well-deserved upgrade as a result. His form has continued into the new season and kept two clean sheets this game week from which he was awarded MOTM in both. Specifically, for his first performance is why he is gaining the TOTW shout from me though.

Ben Chilwell - LB - OVR 81>>84
Chelsea fans had to wait a couple of weeks to see Chilwell in action, but it was well worth the wait. The talented defender was heavily involved in what could be classed as their first strong performance of the season. The hosts managed a 4-0 home win over Palace, who have impressed in stages this season with Chilwell himself picking up both a goal and an assist.

Marcel Halstenberg - LB - OVR 77>>81
Leipzig recorded a convincing 4-0 home win over Schalke, whose problems continue to mount early in the season. Halstenberg picked up both a goal and an assist in the match which resulted in Kicker awarding him a 1.5 match rating. That should be enough for him to claim the IF despite a large number of defenders performing to a high standard.

Hector Bellerin - RB - OVR 80>>83
The Premier League defenders were the gift that kept on giving this week. With so many offering multiple attacking contributions it is inevitable that one or two will miss out, but it is difficult to ignore them at the same time. Bellerin supplied the assist on both Arsenal's goals as they recorded a 2-1 win over Sheffield United.

Neymar - LM - OVR 91>>92
PSG looked all over the place during their first two games of the new season, losing both of them. They finally look to be back to their best though with a 6-1 thumping of Anger making it four wins on the bounce. Neymar was superb throughout scoring twice and assisting another although surprisingly L’equipe only awarded him a 7/10 which does hurt his chances. With it being his first of the game and the first release date TOTW I highly doubt that EA fails to include the Brazilian though.

Heung Min Son – LW - OVR 87>>88
It will go down as OGS’s worst day in his managerial career with multiple mistakes at the back practically gifting Spurs goal after goal and with Martial losing his cool with Lamela they had to play with 10 for the majority of the match. Taking nothing away from Tottenham though as they completed the match superbly and once again Son was heavily involved with two goals and one assist. Kane also got two goals and an assist while Aurier chipped in with one of each. The Korean should be the man picking up the IF on Wednesday though.

Jack Grealish - LM- OVR 80>>83
With Tottenham beating Manchester United 6-1 you though the Premier League couldn’t get any better, but Aston Villa proved that wrong, scoring seven past Liverpool in a 7-2 home win. Multiple players stood out, but you have to narrow down the options. Grealish supplied three assists and scored twice in the romp making him practically a certainty.

Renato Sanches - CM - OVR 78>>82
With the majority of performances coming out wide it left a couple of punts for the central options. One of which could easily be Sanches after L’equipe awarded him an 8/10 for his goal in Lille’s 3-0 away win over Strasbourg. Sanches often gets recognition for his performances so when he scores, he is always in contention for TOTW.

James Rodriguez - RW - OVR 82>>84
Rodriguez is having a major impact on Everton as a whole and along with a couple of other big signings for them has resulted in them being a major force early on this season. They recorded their 4th win of the season this weekend against Brighton and once again the Colombian was pulling the strings. Two goals and one assist will result in an IF for him, but the disappointment comes with the fact that he will be a RW, making him practically useless in terms of FIFA.

Robert Lewandowski - ST - OVR 91>>92
After a poor result for Munich last week it was crucial that they bounced back against Hertha and although they struggled to get across the line throwing away a couple of leads, their talisman Lewandowski was there to help them come through. Scoring all four of their goals, including a late penalty to win the match the Polish striker continues his superb goalscoring form.

Erling Haaland - ST - OVR 84>>86
The big names keep on coming. Haaland continued his ridiculous goalscoring record for the club with a further two against Freiburg in Dortmund’s 4-0 win, additionally picking up an assist. Their young talent Reyna picked up MOTM with three assists but with him being silver and Haaland being a huge name I would be surprised to see anything other than a Haaland IF.

Odisseas Vlachodimos - GK - OVR 81>>84
This was a difficult decision to make with several silver keepers standing out while golds were few and far between. Realistically we will see two gold keepers though and that was why I opted for Vlachodimos over other options. Despite conceding twice Vlachodimos was crucial in Benfica winning the match 3-2, saving a penalty and making seven saves in total, a performance which saw Abola award him an 8/10.

Aaron Cresswell - CB - OVR 77>>81
West Ham has looked a completely different side during their past couple of matches compared to the first couple. Beating Leicester City 3-0 on Sunday to back up their previous win. Both Cresswell and Fornals impressed but with two assists and a clean sheet, keeping Vardy noticeably quiet I feel that the IF must go the way of Cresswell, who was playing an unusual CB role.

Galeno - RM - OVR 77>>81
Portugal was robbed of both Oliveria and Dias, although Dias was largely down to the Manchester City transfer. I would be incredibly surprised if EA opted to go against the division again though. Especially when you consider the performance from Galeno. The Brazilian scored twice and assisted another as Braga recorded a 4-0 away win over Tondela.

Davidson - LM - OVR 77>>81
The number of wide midfielders putting in impressive performances this week was astounding. Davidson is yet another I have in my side after he scored three of Alanyaspor’s six in their convincing 6-0 home win.

Steven Berghuis - RW - OVR 81>>84
Despite the amount of wingers I have already included in this prediction I simply couldn’t ignore Berghuis. The Feyenoord man has been in superb form this season adding another two to his tally for Feyenoord this weekend making it six goals in his last four matches. He was named player of the week by VI which should see him in.

Ollie Watkins - ST - OVR 76>>81
We have already mentioned the shock demolition of Aston Villa beating Liverpool 7-2 and although two from the same game is a rarity, there are exemptions made for scenarios just like this. Watkins was the man to do the early damage scoring three of the first four goals before Grealish turned up to finish the job in style.

Patson Daka - ST - OVR 76>>81
Patson Daka was snubbed on numerous occasions last FIFA with even hat tricks failing to book him a spot in EA’s TOTW. Now that he is a gold card on the game, I do feel that his chances significantly increase though. With Salzburg recording a 7-1 win the result also stands out so I would expect the Austrian outlet to feature in TOTW 2. Daka looks to be the best bet with two goals and one assist to his name.

Facundo Roncaglia - RB - OVR 73>>80
La Liga was a difficult league to include players from but despite being a silver card I have opted for Roncaglia. He was crucial for Osasuna in their 2-0 win at home to Celta Vigo, being involved in both their goals. One for himself and providing the assist for the other. That alongside a clean sheet in a big league should be enough to force him in despite the non-gold limitation.

Marcus Harness - RM - OVR 66>>75
With Pompy going 2-1 down after an early opener from them it looked as though their miserable start to the season was going to continue. They dug in hard to overcome the deficit though with Harness scoring three times to record a 4-2 win over Burton Albion.

Danny Grant - RM - OVR 60>>70
Another RM who managed to find the back of the net three times was Grant over in the Irish league. Bohemians won the match 3-1 away from home as they continue to chase the impeccable Shamrock Rovers.

Mario Pasalic - CM - OVR 77>>81
I could have easily ignored Serie A this week with several fringe players being the best they had to offer. They will almost certainly feature in EA’s side though and thus I have taken the punt on Pasalic. With a lack of central players, he fills a gap that is needed for them. Scoring once and assisting another Gazzetta awarded him a 7/10 for his performance in Atalanta’s 5-2 win over Cagliari.

Ibrahima Niane - ST - OVR 70>>78
A hat trick usually guarantees you an IF but when it’s in a top division such as Ligue 1 there is no doubt surrounding the selection and that is exactly the case for Niane after his three goals saw Metz record a 3-1 win over Lorient.