Mister Fantastico…  the one and only Del Piero.  When looking through the list of possible ICONs in the 1.3 - 1.5 million coin price range you start to realize that there are a lot of intriguing options.  90 Henry, 88 and 90 Best, 88 Matthaus, 87 Butragueno, 87 Dalglish and of course 90 rated Del Piero; all fantastic options and all were on the table for this weekend’s squad.  We thought about completing a poll for your thoughts but simply ran out of time and ultimately the choice came down to personal preference.  You may recall that in FIFA 20 Del Piero was on another level… his finishing was exquisite, his pace was manageable, and an absolute sorcerer on the ball...  You might note that my review picture is after 31 matches… which includes the entire Weekend League (plus one disconnect that did not count); which was ultimately an issue with the original 20 match picture.  However, the 39 goals and 17 assists across the toughest of matches just shows the constant output that you can get with this card.  Keep in mind my early struggles and the 11 rage quits and you start to realize that this is fantastic output per quality minutes played.  In the end, Del Piero was the clinical technician all weekend in the following squad: 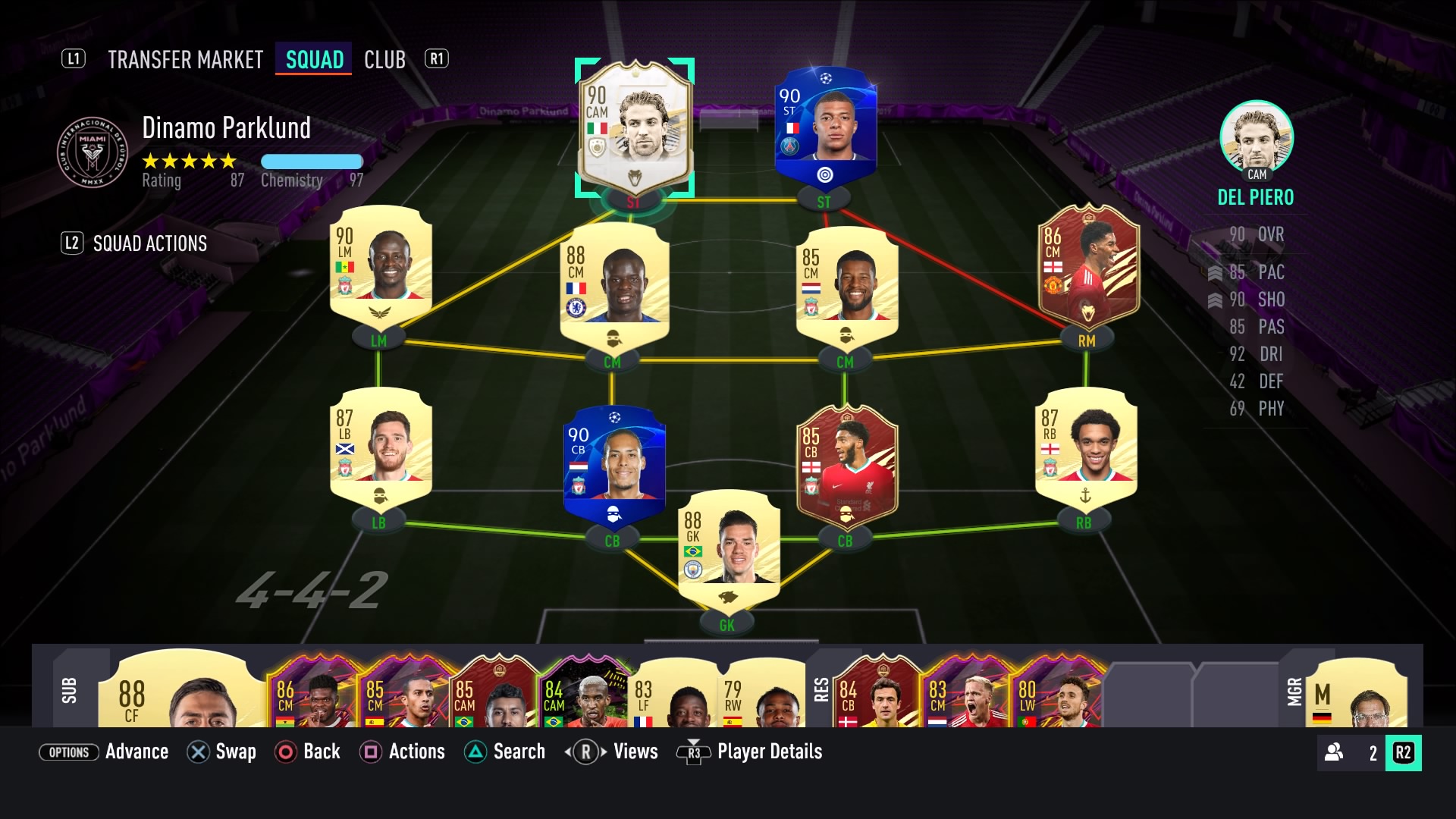 I should start off by saying that I would categorize Del Piero as a luxury item.  What I mean is that I would certainly not go building your squad around Del Piero in hopes that he will be your savior.  While the likes of IF Rashford, IF ASM, and Mbappe can create their own goals… Del Piero relies heavily on the support and distribution of teammates.  You would think that 96 ACCELERATION & 95 SPRINT SPEED with the HUNTER chemistry style would be enough, but it honestly didn’t feel like it was.  I should be more specific than it is the SPRINT SPEED that is especially misleading, while the ACCELERATION was hit or miss depending on the connectivity.  The issue with the pace hits hardest in the tight areas of your opponent's drop-back style… there is not a ton of room to maneuver and you need snappy and quick movements to finally get an unblocked shot on target… but with Del Piero, that just doesn’t happen often enough.  In this case, you need to create chances through movement and intricate passing, and like I say, rely on the quality of the players surrounding Del Piero for your goals.

- efficient and unemotional; coldly detached.
I don’t think I could word it better than the dictionary myself… Del Piero is a cold blooded killer in front of goal and “efficient” doesn’t even do this card justice.  I mentioned this card as a luxury item; and I stand by that… but when you have the squad set up to get this lad in open spaces, it is game over.  The 5 STAR WEAK FOOT is perfection with this card and the difference between feet is undetectable.  99 FINISHING, 90 SHOT POWER & 87 LONG SHOTS feel pin-point on either foot and it is hard to describe the picture perfect way that Del Piero strikes a football.  The cherry on top comes from the FINESSE TRAIT which allows Del Piero some additional finishing options, especially when trying to avoid the Great Wall of AI Blockers in your path.  Most impressively for me was the fact that the trait feels just as effective on both feet again, making this card a lethal option within 25 yards of goal.

1.3 million coins as of this writing, and having just reviewed Mbappe in a similar level of price range I could not in good faith give Del Piero a perfect rating here.  The card is insane, the finishing is clinical, but he is lacking in some key areas to really push this card into the next tier of available options.  I have to admit I was a bit disappointed… Del Piero is one of my favorite ICONs in the game and after a flying start to the weekend I thought I was looking at a potential record-breaker for Weekend League returns.  However, that dream began to fade away rather quickly… and if you follow me on Twitter: @IVIaeNine you would know that this weekend just didn’t go well overall.

I have already touched on the misleading pace… but one statistic that was not misleading was the 64 STRENGTH, which I can report is about as poor as it appears in writing.  Going into the review I was weary of the issue and hoped that the 92 DRIBBLING and 95 PACE would keep would be tacklers grabbing at straws.  Unfortunately, the pace was not there and the poor strength was only amplified by Del Piero’s shorter stature.  The result… a lot of lost possession in the build-up play and a lot of frustration from the manager using him.  On a side note, I should go back to the 92 DRIBBLING and confirm that it is quite effective.  87 AGILITY, 73 BALANCE & 4 STAR SKILLS are a nice combination to produce some magic on the ball… and just a reminder after some negative feedback that this card is still a quality option.

In the end a 9/10 is still a quality rating… there has been some confusion about my reviews of late regarding flip-flopping on players.  The truth of the matter is, some players are quality options in numerous areas of the game, but fall short in others, and I want to cover as much as I can so that you can make educated decisions when purchasing.  For Del Piero, there are numerous pros: Shooting, Dribbling & Passing … and some unmistakeable cons: Sprint Speed & Strength.  The result is a card that just doesn’t quite live up to the crazy price tag and honestly, 1 million or even 1.1 million would be more accurate in terms of coins for quality.  But it is not there at the moment, and so I would suggest you steer clear.  Obviously, if you have the budget and looking for a clinical finisher to put you over the edge, this might that luxury item for you.  With all that said, if you have used Del Piero I would love to see your opinions in the comments.  Stay safe out there.  Cheers for reading. 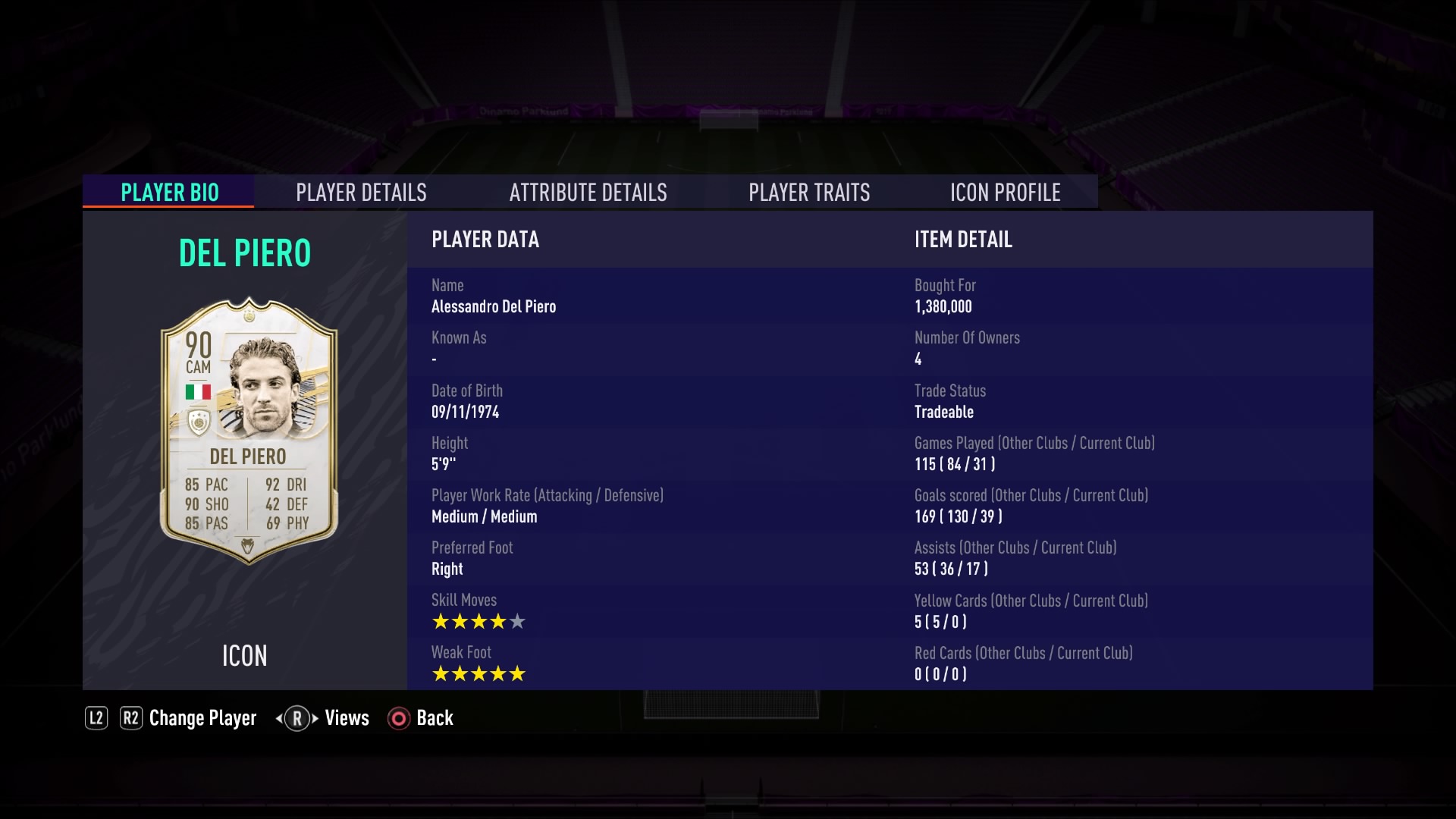 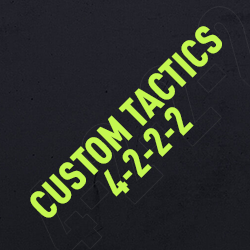