After last week's horror show which provided possibly the worst TOTW of the year you will be thankful to see this prediction, which contains no less than nine players rated 86 or above. Not only that but with lots of meta players to choose from it's shaping up to be a strong side! 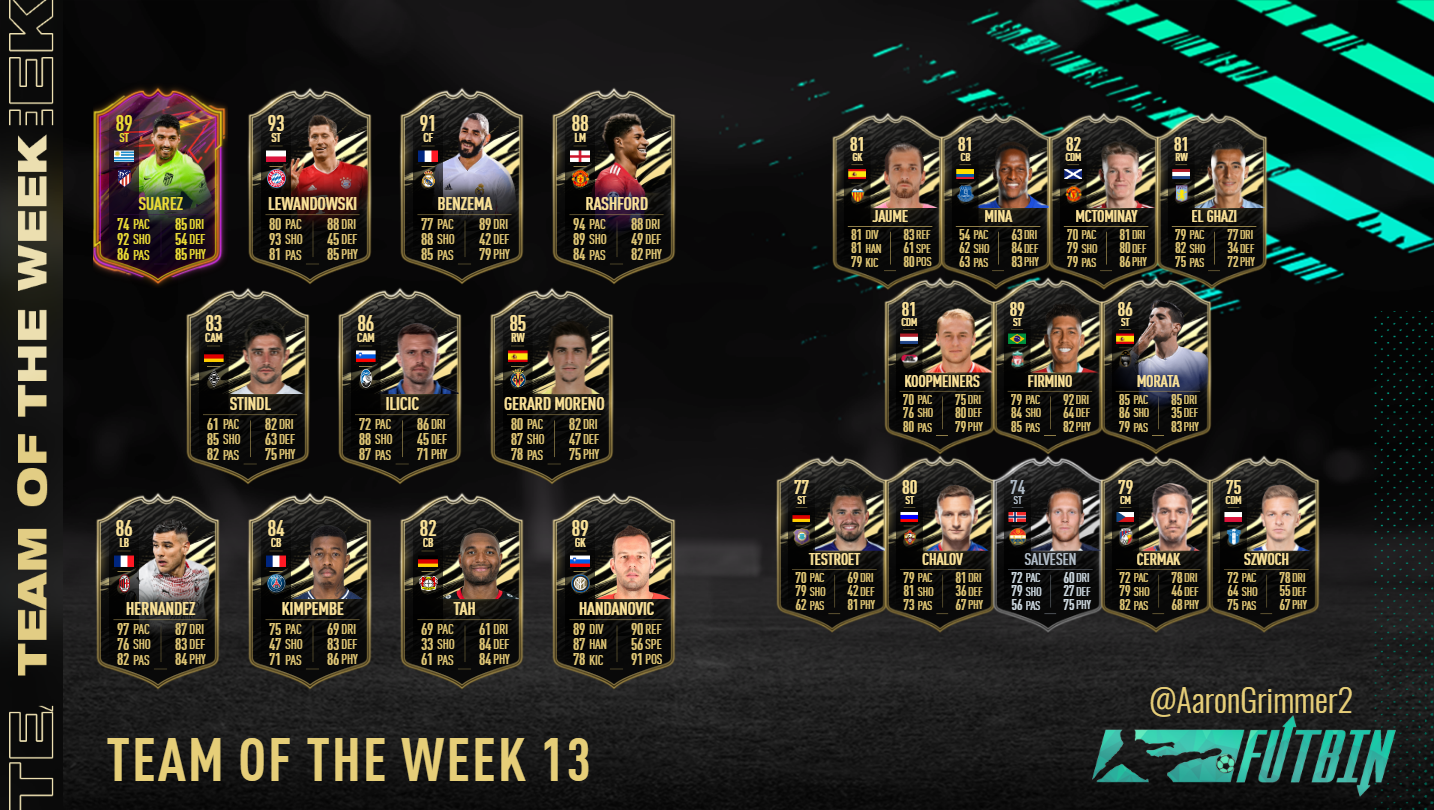 Samir Handanovic – GK - OVR 88>89
When we see two sets of fixtures played which count towards one TOTW we often see top tier players make the cut. We start the week with exactly that after Handanovic was crucial for Inter during their 1-0 win over Napoli. Making a handful of world-class saves to deny Napoli from getting on the scoresheet. Gazzetta awarded the Slovenian with an 8/10.

Presnel Kimpembe – CB - OVR 81>>84
Both Kimpembe and Marquinhos picked up an 8/10 from L’equipe this weekend for their defensive display during a 0-0 draw with Lille. Due to Marquinhos recently featuring in the Freeze promo I would expect the IF to go the way of Kimpembe although I wouldn’t be surprised either way. Kimpembe should be the favorite though and an impressive IF at that.

Jonathan Tah – CB - OVR 79>>82
This one a bit of a punt for several reasons but with a lack of defenders and Bundesliga options it is one I am willing to take. Diaby was named MOTM from Leverkusen's midweek win but both he and Tah picked up a 1.5 rating from Kicker and with a recent TOTGS item going to Diaby I can see EA instead opting for Tah.

Theo Hernandez – LB - OVR 80>>86
Last week Theo was snubbed for two goals and although it was expected it can still be classed as harsh. Once again, he stands a chance coming into TOTW 13 and although the TOTT item still makes him a risk for the inclusion it's less of one with the gap. Hernandez was named MOTM by Gazzetta with a 7.5 for his assist and defensive display during Milan’s 2-1 win over Sassuolo.

Marcus Rashford – LM - OVR 85>>88
Manchester United continue to win games and in turn continue to be an outside title threat despite not looking dominant while playing, they still manage to pick up all three points. The latest came via a 3-2 away win over bottom of the table Sheffield United with Rashford scoring two of those three goals.

Lars Stindl – CAM - OVR 80>>83
Lars Stindl was named player of the week during the mid-week set of fixtures in the Bundesliga after a superb display late on scoring in both the 90th and 95th minutes to secure both a point for Gladbach and a personal hat trick. Kicker awarded the performance a perfect 1 making him a certainty for this side.

Josip Ilicic – CAM - OVR 84>>86
Ilicic has not been as focused on football as he was last season which is why we have not seen the same sort of figures as we have previously seen from him. He showed what he is capable of this weekend though coming off the bench at halftime to score once and assist another two in Atlanta’s 4-1 win over Roma. He went on to be named POTW with an 8.5 from Gazzetta.

Gerard Moreno – RW - OVR 83>>85
This time last season Moreno had picked up several IF’s and then went on to receive a headliner item. This time around it has been significantly quieter for the Spaniard but he does now look set to pick up his first of the game. That is after he scored twice from RW in Villarreal’s 3-1 away win over Osasuna.

Robert Lewandowski – ST - OVR 91>>93
Lewandowski continues to excel, stating his dominance in world football. Coming off the back of being named the best player in Europe for the past year he continued his goalscoring form with two braces to his name. He specifically gets the nod for the latter of which Kicker gave him a 1.5 with Munich beating Leverkusen 2-1

Karim Benzema – ST - OVR 89>>91
Another big-name player for the striker positions this week is Karim Benzema. The Frenchman scored twice to help Real Madrid record a 3-1 win at home to Bilbao on Tuesday. A result that helped lift Madrid into third position. He then further increased his chances with a goal and two assists during a 3-1 win over Eibar

Luis Suarez – ST - OVR 87>>89
Completing the trio of strikers, we have a potential OTW with Suarez also scoring twice this weekend. Atletico recorded a relatively simple 3-1 victory over Elche and I can see Suarez’s performance being enough to warrant his second upgrade this year, especially with the result meaning that Atletico now goes three points clear at the top of La Liga.

Jaume – GK - OVR 77>>81
Despite conceding two goals I can still see Juame getting the nod for the substitute keeper this week. The Spaniard still played a huge role in Valencia managing to pick up a point against Barcelona, making seven saves in total and saving a Messi penalty. Without him, Barcelona would have run away with this result and thus he deserves some recognition.

Yerry Mina – CB - OVR 78>>81
Arsenal’s woes continued this weekend with yet another loss, this time at the hands of Everton who recorded a 2-1 win over them. Mina scored the winning goal and thus stands a chance of an IF in TOTW 13.

Scott Mctominay – CDM - OVR 78>>82
United started fast out the gates in their fixture with Leeds on Sunday, scoring twice in three minutes. Bizarrely Mctominay was the goal scorer of both those goals, making him the fastest player in PL history to score twice, quite impressive for someone who very rarely scores. He later added an assist as United went on to win the match comfortably by six goals to two.

Anwar El Ghazi – RW - OVR 75>>81
West Brom decided to sack Bilic after a 1-1 draw with City last weekend with Sam Allardyce being the man to take over. His first game in charge ended miserably though with a 3-0 home defeat to Aston Villa. El Ghazi scored two of those three goals and although he probably should have scored more, he still stands a strong chance of making TOTW.

Teun Koopmeiners – CDM - OVR 78>>81
EA opted against VI’s player of the week and instead went for Antony in TOTW 12 but I can’t see them going against it this time around. Koopmeiners picked up a huge 8.5 for his two goals and one assist during AZ’s 5-3 thriller against Willem on Sunday. With it being rare to see a rating above 8 I doubt that he will miss out.

Alvaro Morata – ST - OVR 82>>86
Yet another I have included with the risk of a recent TOTGS card is Morata. Juventus recorded a convincing 4-0 win over Parma with Morata scoring once and assisting another two. Ronaldo also found himself scoring two, but I feel as though it's too soon for another upgrade for him, especially for two goals. Both players received an 8/10 and thus I expect the nod to go the way of the Spaniard.

Roberto Firmino – ST - OVR 87>>89
Firmino was brilliant in both games Liverpool played this week, first scoring a last gasp winner in a top of the table clash with Tottenham before then scoring twice and assisting another during their 7-0 hammering of Crystal Palace. The Brazilian went on to be named MOTM in both fixtures and thus is highly likely to lead the line for this side.

Mateusz Szwoch – CDM - OVR 65>>75
There were multiple CDM’s putting in outstanding performance over the course of the weekend, Szwoch being one of them. Wisla recorded a 4-1 home win with Szwoch providing the assist on the first three. We have seen EA take a liking to three assists this season and with the Polish man playing CDM I would be surprised if he misses out.

Ales Cermak – CM - OVR 73>>79
Another match ending 7-0 this week, although much less high profile was Plzen’s match at home to Teplice. It’s usually the case that these matches produce IF’s and with central midfielder, Cermak, scoring three of the seven goals I can’t really see this side going without him.

Lars Jorgen Salvesen – ST - OVR 64>>74
Last week saw a strong snub the way of Junker from the Norwegian division and once again they have a strong candidate for TOTW. This time from Stromsgodset with Salvesen scoring three times for them during a 3-1 win over ODD. A huge result in their relegation battle, putting them four points ahead of the drop.

Fedor Chalov – ST - OVR 74>>80
The RPL has been snubbed on numerous occasions so far this season already and thus I would expect only the very best performances to be noticed by EA for this selection process. I feel that Chalov falls into that category this week after scoring three times for CSKA as they recorded a 3-1 away win over Rostov.

Pascal Testroet – ST - OVR 69>>77
Aue picked up their first win in three via a 4-1 home win over Karlsruher with Testroet being involved in all four of those goals (two goals and two assists). He was awarded POTW with a perfect 1 match rating which was by far the best performance from the lower leagues in Germany.