I am not sure why it has taken this long to review a version of the Spurs sniper Heung Min Son.  Truthfully, it just didn’t feel like the right time until now and man am I glad we waited.  89 Headliner Son is everything you would expect him to be and more, blending a combination of Pace, Dribbling & Shooting that can strike fear into any backline.  Of course, it was a struggle to get this review started as Son spent the majority of Friday and Saturday in the extinct barrel… but with a stroke of luck I was able to snipe the speedster and the weekend was underway.  I decided to interchange the HUNTER/HAWK chemistry styles during the review, before settling on HAWK as the more effective option for the final matches.  In the end, I deployed Son as the left ST in my 4-4-2 formation, playing him alongside Mbappé in a speedster’s paradise up top.  There was a lot of opportunities for Son to fall short of lofty expectations in this review, but instead, he rose to the challenge and filled the net all weekend in the following squad: 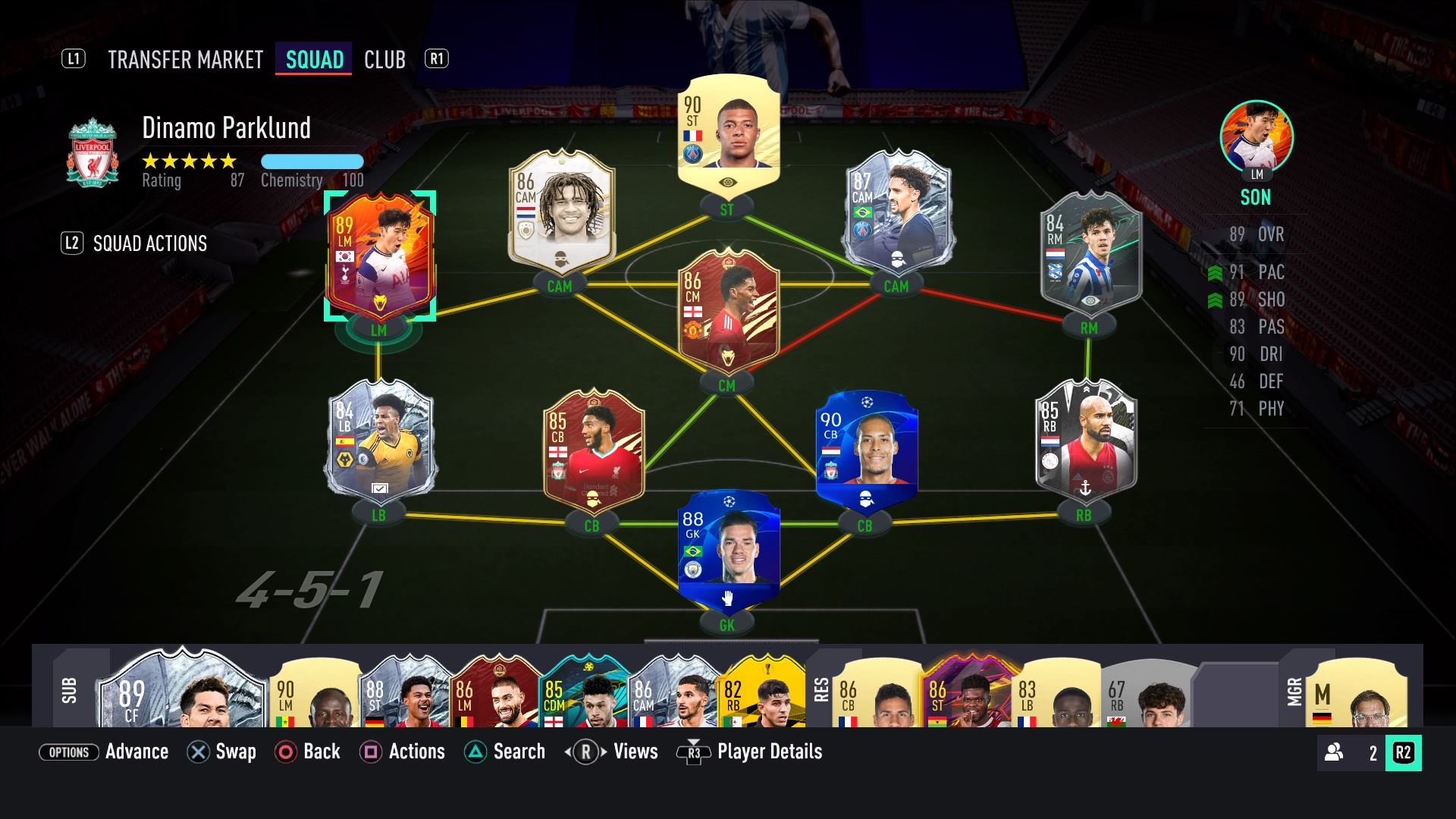 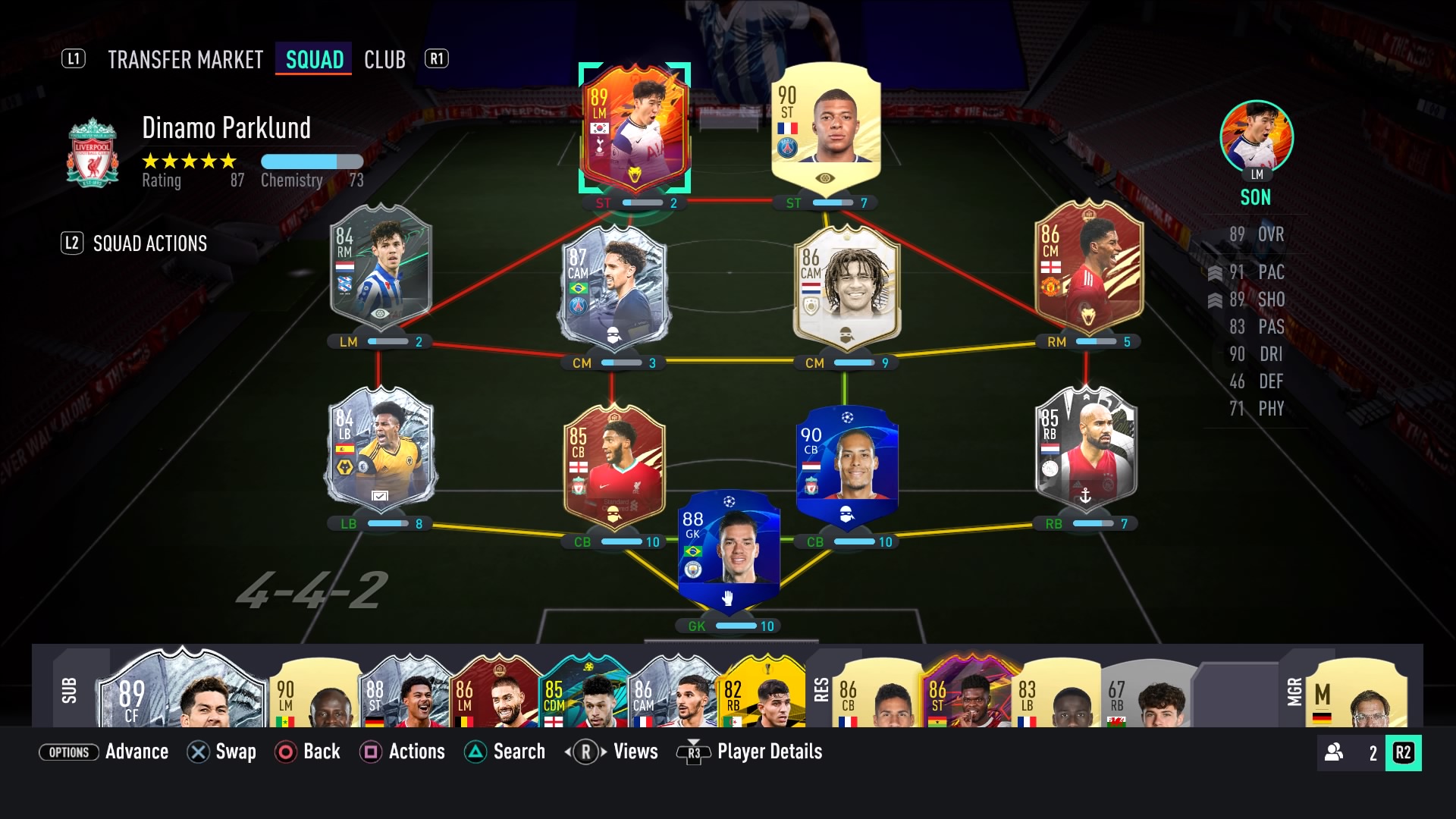 Cracked. Broken. Foolish. Unplayable. Terrorizing. You name it… this card personifies it.  The biggest compliment I can give this card comes from a conversation I was having about Son over the weekend.  “He feels in-game like Neymar did a few months ago.”  Of course, it would be silly to sell Neymar short now as it is still a brilliant card, but a few months back he was certainly “thee card” and was borderline untouchable.  That dominance is what the current Headliner version of Son feels like, with the potential for upgrades in the near future looming over the FUT landscape.  Seriously… this card is an upgrade or two away from breaking the game.

I realize that it is not “Main Statistic(s)” but I just couldn’t split them to choose.  With 94 ACCELERATION & 97 SPRINT SPEED, this card feels very quick and scary fast.  The scary part is that with 89 AGILITY, 81 BALANCE, 90 BALL CONTROL & 91 DRIBBLING… Min Son feels well in control while operating at these speeds and truly is a nightmare to deal with. While I only played one opponent utilizing Son against me this weekend... the smiling assassin hit me for a brace and caused a ton of issues that his counterpart was causing for me at the other end of the pitch.  Again, this is kind of where my Neymar comparison started as I have found that weekend after weekend more and more centre backs are able to deal with the Brazilians pace… however, there was only a select few that could really keep up with Sonny in full cry this past weekend.

A shooting masterclass; the only way I can describe the amount, quality and variety of goals that Son managed across the 20 match review.  35 goals is about as good as it gets for me, falling just short of the record despite having a few matches affected by early rage quits or poor gameplay taking away chances to build on the total.  99 SHOT POWER & 99 LONG SHOTS creates a venom behind Son’s shots that is really what bamboozled keepers.  94 FINISHING felt about perfect in situations where “he should score,” and 84 VOLLEYS was enough to launch the ball towards goal with precision.  Then, you seriously cannot tell the difference between feet with the 5 STAR WEAK FOOT and of course is the key element to making Son so effective.  I have said it before and I will say it again… I love a striker who rewards your hard work to make chances with a goal.  Finally, the Finesse Shot with this card is insane and the video only does minimal justice to how effective Son is when you open him up and let fly.

1.25 million. If this was a normal inform version of this card I would almost say it is still worth it.  Of course when you mix in the upgrade potential of the Headliner… along with the form of both Spurs and Son himself… it is a no brainer.  I was asked a few days ago if I thought he was good value and my immediate comparison was RTTF Salah.  Salah has sat at 1.4 million for weeks despite not being eligible for an upgrade until February and then again in March.  Son has this ability weekly… then you look at the statistics and they are close enough to start a conversation… then the 5 Star Weak Foot erases a lot of the gaps between the two.

With only 6 assists I think it is safe to say that the Passing with this card could be slightly better.  The 8.5/10 reflects the fact that in general, I did not notice any real issues in this department… but at the same time, there were minimal standout moments as well.  The 66 STRENGTH is also an area of concern with scanning over Son’s abilities… but again I noticed minimal issues as his speed and agility kept Son moving away from a lot of would be tacklers.  However, it is worth noting that this card is certainly not bullying defenders for goals and if this is a key part of your decision making with strikers then it will become a bigger deal.  All in all this card simply shines and is capable of glossing over small deficiencies with the class in other areas.

Maybe the biggest negative about this card has nothing to do with the statistics itself… if you look at the current form of Kane and Son’s tandem I can see a 90 rated Son arriving sooner rather than later.  However, with Liverpool looming in the 4th match for the upgrade I am not sure that will happen this time around.  So, with that in mind, I can’t deny that 1.2 million is too expensive for the current version of the card… but it isn’t as far off as you would think.  In the end, it is a gamble, and if you are willing to place your bets on the Spurs sensation then it could pay off with a heavy return.  For me, I would have loved to keep hold of him to see what happens, but the reviews must go on.  I hope that you are all safe and well.  Cheers for reading. 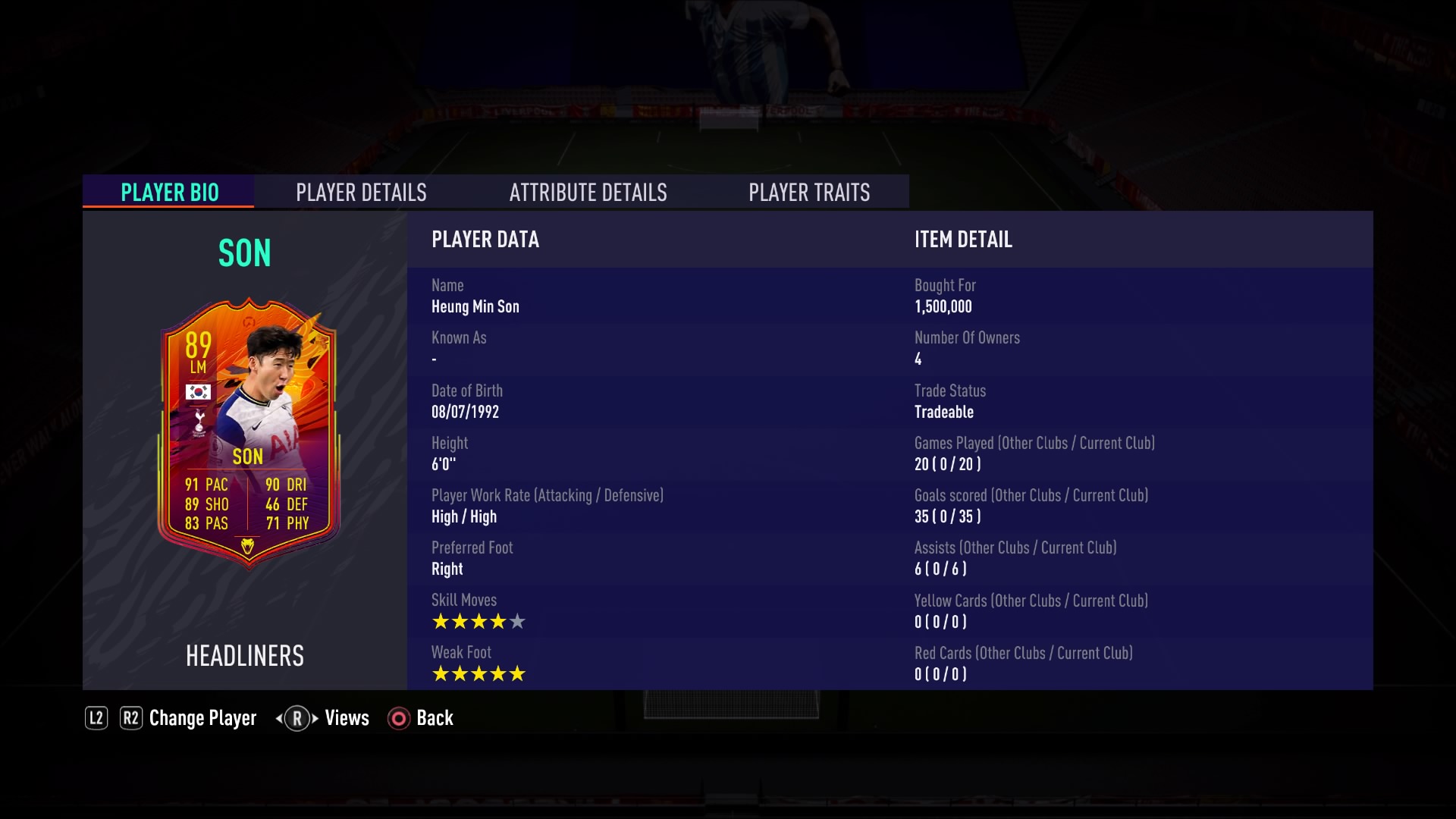 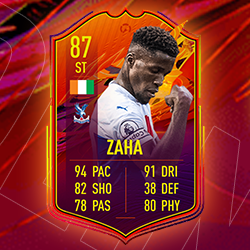