This week could either be huge or flop massively with several high-end players on the fringe of making TOTW 22 with Kante, Handanovic, Haaland and Alberto all standing a chance but none of which are certain to end up making TOTW 22. 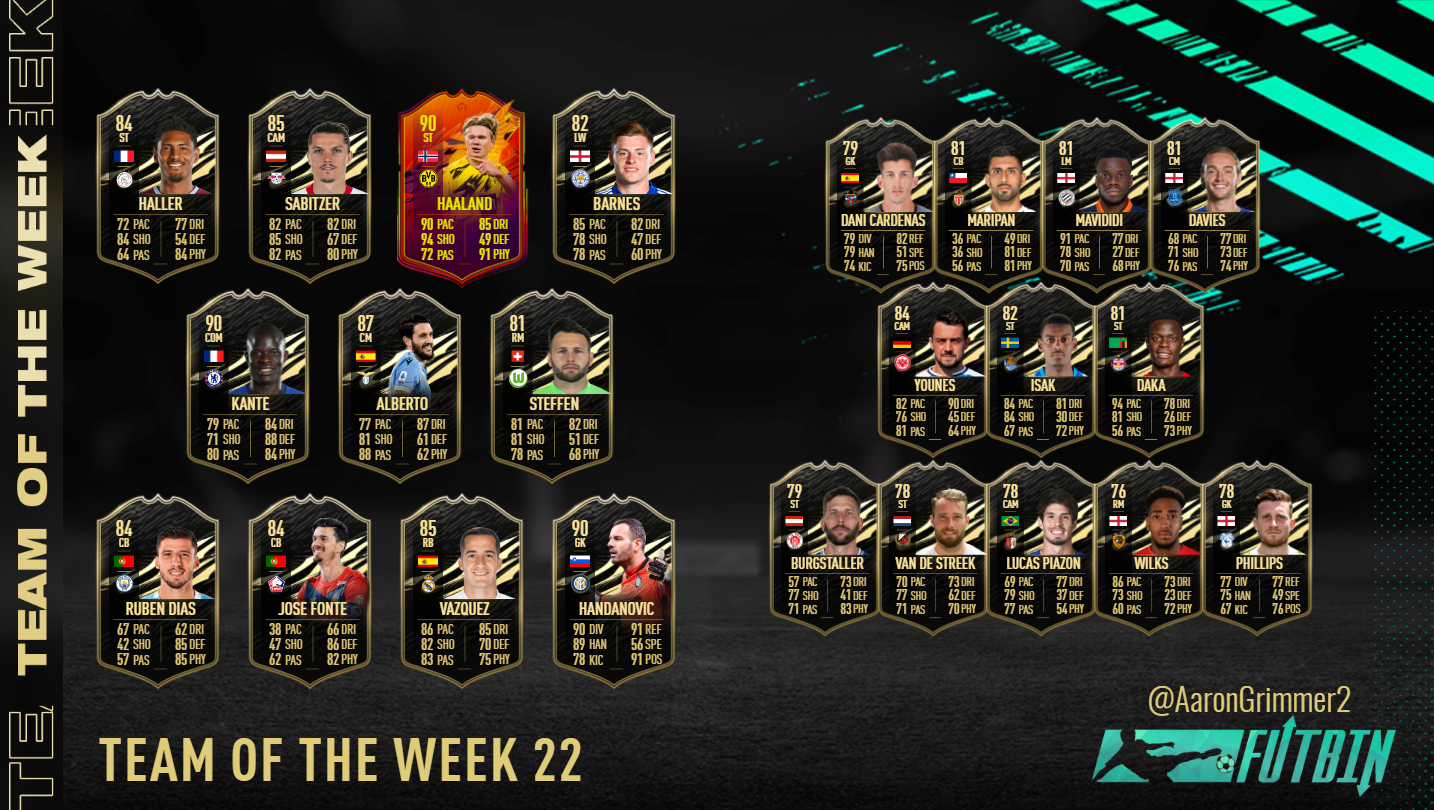 Samir Handanovic – GK - OVR 88>>90
Martinez once again impressed this week with two goal to his name but with just a three-week gap from already his third IF of the season I can see him being snubbed, especially with another clear-cut candidate in Handanovic. Inter will definitely feature in this week’s side though after a very impressive 3-0 rival win over AC Milan. The match would have been significantly closer had it not been for Handanovic though, making several world class saves and eight in total to keep his clean sheet and help spearhead Inter to victory.

Jose Fonte – CB - OVR 78>>84
Despite now being 37 years of age Fonte is still able to hold down his position at Lille and perform on a consistent basis there too. He is now in line for his second IF of the season after scoring once in their 4-1 away win this weekend. Not only did he find himself on the scoresheet but also played a big role defensively, making six interceptions and producing a last man tackle to practically save Lille conceding another.

Ruben Dias – CB - OVR 81>>84
The first of three players I have decided to include from the recent future star promo is Dias. Manchester City’s defence has been significantly stronger since the introduction of Dias this season and he continues to impress at the back for them. He was named MOTM in their 1-0 win over Arsenal this weekend and thus I can see him being included with the lack of obvious defender options.

Lucas Vazquez – RB - OVR 80>>85
This one is a bit of a punt but seeing as though Kroos was snubbed last week due to an upcoming flashback SBC, I fully expect him to be snubbed this week as well. Due to that, the next best option in Madrid could be used, as we see happen on a regular basis. That happens to be Vazquez, who played in a RB role for Madrid in their 1-0 win over Valladolid and with a lack of defensive and La Liga options he is a perfect fit for the side.

Harvey Barnes – LM - OVR 79>>82
Barnes ended up getting snubbed last week which was probably due to the proximity of his future star item but once again I am willing to take a punt on him after the English talent scored once and assisted another during Leicester City’s 2-1 win over Aston Villa.

Luis Alberto – CAM - OVR 85>>87
Luis Alberto is one of those players which often get included in TTOW for what seems like very little on paper and once again the Spaniard could be placed in that category. Nevertheless, after he picked up a 7.5 match rating from Gazzetta for scoring the only goal of the match in Lazio’s 1-0 win over Sampdoria he looks set to be a strong candidate for TOTW 22

N’golo Kante – CM - OVR 88>>90
I will be honest after seeing Chelsea draw 1-1 with Southampton the last thing, I expected was a Kante IF but after he was awarded MOTM with a 9/10 for his performance it looks like it could well be happening. It was the first start Kante had picked up under Tuchel and he definitely wanted to impress. He was all over the field breaking up play after play, basically doing what Kante does best. In a side with limited PL options, this will also work in the Frenchman’s favour.

Marcel Sabitzer – CAM - OVR 83>>85
Leipzig managed a 3-0 away win over Hertha Berlin this weekend as they continue to make a serious title challenge. Sabitzer was brilliant once again, scoring once and assisting another. Which included a magnificent 30-yard strike which is well worth a look if you haven’t already seen it.

Renato Steffen – RM - OVR 78>>82
Another Bundesliga midfielder who put in an impressive shift is Steffen. The Swiss international scored two of Wolfsburg’s three goals as they recorded a 3-0 win at home to Arminia with Kicker awarding him a 1.5.

Erling Haaland – ST - OVR 84>>89
Despite Sancho being named MOTM, he failed to feature in Bundesliga’s TOTW due to numerous other midfield performances. That alongside the lack of strikers and Haaland being a headliner item leads me to believe that EA will end up opting for the striker instead. Haaland scored two of four Dortmund goals as they cruised to a 4-0 win over Schalke.

Sebastian Haller – ST - OVR 81>>84
This one could go one of two ways with both Haller and Tadic making a claim for an inclusion, but my decision was based on the fact we have a lot of midfielders in comparison to strikers and thus I am leaning towards the Frenchman’s brace. It also does appear that Haller was named MOTM which only helps his claim

Daniel Cardenas – GK - OVR 63>>79
We have seen non gold goalkeepers make the bench in the past, so I am more than willing to take the punt on it happening again this week. Cardenas was simply amazing for Levante as they upset Atletico Madrid with a 2-0 win. In total, he made ten saves to deny Atletico and without him, they probably wouldn’t have picked up any points at all let alone three. His recent MOTM item could put EA off but with it being a gold against a silver I don’t see the issue.

Guillermo Maripan – CB - OVR 75>>81
Did anyone ask for another slow IF CB from Ligue 1 to pair with Hilton? Well, that’s what’s on the way after Maripan scored one of Monaco’s two goals in their shock 2-0 win over PSG. Both Maripan and Aguilar picked up an 8/10 from L’equipe but I feel that Maripan is far more likely of the two to be selected.

Tom Davies – CM - OVR 75>>81
It goes from bad to worse for Liverpool who now sits in 6th position after a 2-0 Merseyside Derby loss to Everton. Although Davies was not involved in any of the goals his overall performance was magnificent in the middle of the park, claiming MOTM after basically controlling the match. It’s been a while since he has looked this good and considering the caliber of the match, I can see him getting in without goal contributions.

Mavididi – LM - OVR 75>>81
It was quite a quiet week in terms of suggestions with a very limited number of candidates, but it does mean those who scored twice are likely to be included. Mavididi is one of those players, scoring twice from LM in Montpellier’s narrow 2-1 win at home to Rennes. The Englishman featured in L’equipe’s TOTW with a 7/10.

Amin Younes – CAM - OVR 75>>84
It’s not often that you will see an attacking player included for just one goal but when you are playing against Bayern Munich and also named as player of the week your chances are very high. Younes scored one of two Frankfurt goals as they went on to upset Munich with a 2-1 win.

Patson Daka – ST - OVR 76>>81
In the past Daka has been snubbed time and time again to the point where you begin to wonder can he even get an IF? This time will ultimately put that to the test with the now gold striker scoring three times during Salzburg’s 4-2 top of the table clash win against Rapid Vienna. A result which now puts six points between the two sides.

Alexander Isak – ST - OVR 79>>82
Isak has been simply brilliant the last month or so and it is clear to see why he is rated so highly and tipped to be a huge prospect going forward. Sociedad bounced back from a disappointing 4-0 loss to United in the Europa League by recording a 4-0 of their own, beating Deportivo comfortably. Isak scored three of those four goals and I expect the gap between his promotional FS item to now be long enough for an inclusion

Dillon Phillips – GK - OVR 71>>78
I always find it extremely difficult to predict the non-gold goalkeepers with EA’s selection process on them being interesting to say the least but Phillip's performance on Saturday is one of the most obvious ones seen in a while. Although Cardiff won 4-0 it was the keeper’s performance that stood out. Making a total of five saves and making two penalty saves to keep his clean sheet intact.

Lucas Piazon – CAM - OVR 71>>78
It’s been a while since the name Piazon has been heard with the once highly tipped Piazon now playing his trade for Braga in Portugal. The Brazilian does have his moments of magic though with his latest coming during a 4-2 home win for Braga, being involved in all four of those goals with two of his own going alongside two assists as well.

Mallik Wilks – RM - OVR 67>>76
This one comes from a midweek fixture which considering there was no main league action from midweek poses slightly more of a risk but with EA seemingly far more consistent when it comes to including midweek performances, Wilks seems to be an obvious choice. The Hull midfielder scored three and assisted another as they went on to beat Wigan 5-0 away from home.

Guido Burgstaller – ST - OVR 72>>79
Ea seems to love including player of the week from either Bundes 2 or Bundes 3 and due to that, I like the looks of Burgstaller who was named POTW for Bundes 2 this week with a perfect 1 rating, for his brace in St Pauli’s 3-2 win.

Sander Van De Streek – ST - OVR 70>>78
There were numerous top end performances from the Eredivisie this weekend, but it was Van De Streek who ended up being named player of the week. That is after he scored twice and assisted another in Utrecht’s 6-0 demolition of Willem. With no non gold hat tricks from strikers this week he seems to be an obvious selection.