A pair of Hero SBCs have come and gone and if you were lucky enough to pack this sharp shooter I would love to hear in the comments how he is playing for you … and also curse your name for the ridiculous luck.  After getting Mostovoi in the first Hero SBC I would have to say that I have been a little bit gun shy on the two latest packs… that and I just finished dumping all of my fodder into Salah, so there is that as well.  However, when paying the coins for Di Natale this weekend I was hoping the result would be a return to Rank I, finishing in the top tier back to back for the first time this FIFA… and thankfully my hopes turned into reality across the 20 match grind.  The formation almost picked itself for this weekend as the 4-2-2-2 worked wonderfully last weekend and throughout the week… and if you are interested you can find those tactics in my latest review.  And while the formation was simple, the chemistry style proved a real issue to settle on as I tried both the HAWK and HUNTER style equally across the 15 matches before settling on the HAWK style to close out the remaining challenges.  Di Natale was the lethal weapon all weekend long in the following squad: 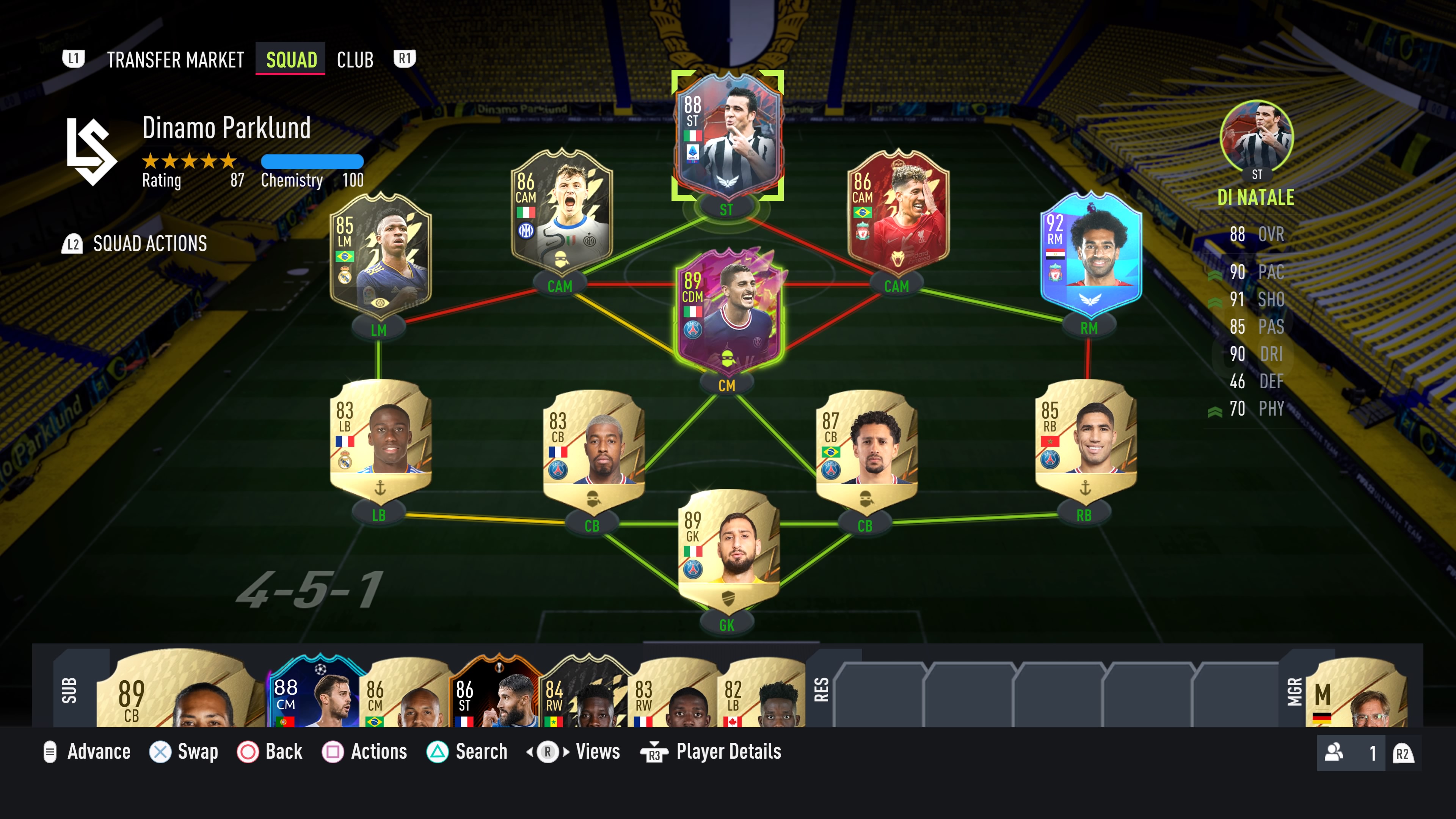 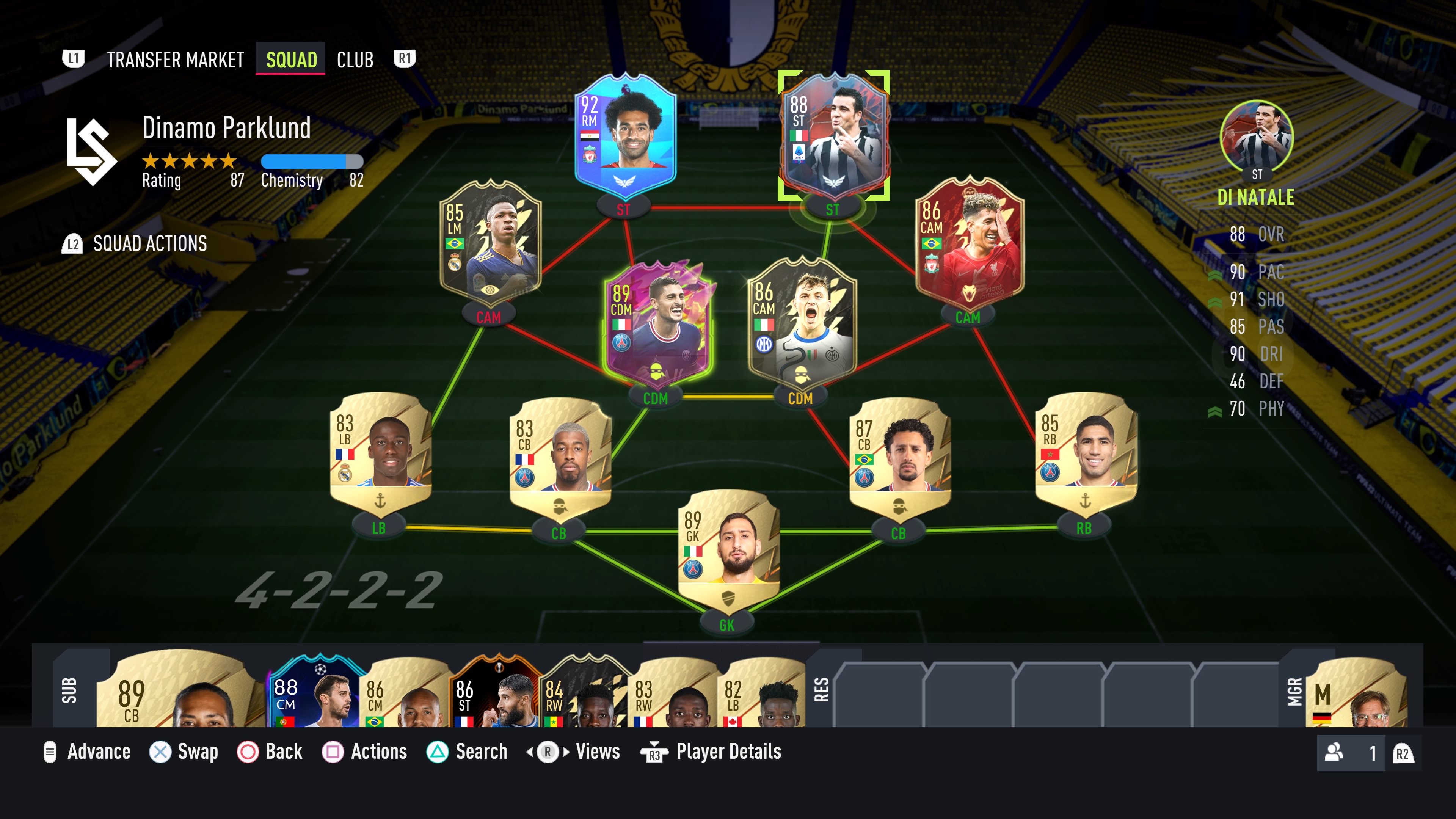 I think that the fact that Di Natale turned out to be fun to use, fox in the box, sharp shooting wonder-card wouldn’t come as much of a surprise.  But what did turn out interesting was how different of a card Di Natale plays when given the HAWK and/or HUNTER chemistry style application.  With the HAWK application, I felt Di Natale’s pace suffered more than it should have, the shooting became sublime and the physicality was enough to fight for and create chances.  With the HUNTER chemistry style Di Natale’s speed felt much improved… but the lack of shot power saw more “should be” goals getting saved, while the physicality became even more of an issue.  But one thing was abundantly clear… regardless of your choice this card will be a key contributor to the majority of squads.

One weekend removed from a 5 STAR WEAK FOOT striker and I was generally disappointed all weekend.  For those that have used Di Natale you will know that he can definitely belt them on his least favorite left foot, hence the 9.5/10 rating. However, it was not a 10/10 and those few and far between efforts on Di Natale’s weak foot that didn’t find their mark are exactly why.  Otherwise, the 97 FINISHING, 97 SHOT POWER & 99 LONG SHOTS were outstanding and both contributed and hindered Di Natale’s goal totals across the 15 matches.  Why do I say hindered? If you look at the stats you see 18 matches played… but between gifted and early quits it was honestly more like 12 matches in terms of minutes and I really should have included the remaining two matches.  When players are clinical, opponents tend to quit sooner, and therefore limited the overall minutes Di Natale played compared to past reviews.

It took me way too long to realize this cards dribbling potential during this review and probably cost the Italian two or three more goals minimum in the early stages.  Standing at 170cm | 5’7 I thought this card could and would make a mockery of the 87 AGILITY & 91 BALANCE, turning defenders inside out in and around the box.  The truth, I actually found Di Natale underperformed based on his stats and size.  I actually thought this review might be headed in a bad direction until I realized it was the 91 BALL CONTROL, 89 DRIBBLING & 97 ACCELERATION that truly make this card special.  The amount of “quick shift of direction and blast the ball” goals that I scored in the second half of this review was eye opening and even in my qualification for next weekend league (after the review was over of course) Di Natale has been a growing contributor in the goals department.

A slight downturn in the market and two Hero SBCs was enough to certainly cost me over 100k to complete this review as I have lost a lot on this card… but it still isn’t quite enough for me to say that this card is perfect value for coins.  In fact if I had to pick a good comparison it would be another Hero in the form of Robbie Keane who more aligns with what I would expect for Di Natale’s price.  True, Keane isn’t the best passer and Di Natale just edges the Irishman in most categories… but in the end they both just get the job done in front of goal and nothing outside of that from Di Natale’s performance really warrants the lofty price tag compared to Keane in my mind.

If this card was just that little bit stronger on the ball (and of course a 5 STAR WEAK FOOT) I think he would be moving closer to a 9.5/10 overall.  The use of a HUNTER chemistry style would be more enticing and the card would be more of a menace in general.  But after that it is a lot of high praise for Di Natale as his 86 SHORT PASSING felt extremely crisp and accurate and if my opponent left gaps defensively I always knew Di Natale would produce the magic to exploit them. Additionally, beyond maybe Sadio Mane I am not sure a card has run the channels and found open space the way that Di Natale does.  In a weird way, this once again seemed to hinder Di Natale’s production numbers as his early moves often led to a “second assist” in many cases.  Despite not padding statistics, I still noticed… and continue to be impressed with the areas this card finds in between my opponents lines… a must have in the more drop-back meta we seem to be experiencing.

This is one of those reviews that I find myself in two minds when it comes to my final thoughts… Hopefully, this self-induced Q and A helps you decide either way on using, saving for, or avoiding this card altogether.  Is Di Natale a great card? Undoubtedly.  Do I think he gives you 600k worth of value? Not really. Are there many cards that can match the 90+ Pace, Dribbling and Shooting that Di Natale boasts? Absolutely not! Will the card improve most squads? 100% Is the card fun? Hell ya! So with all of that in mind, I leave it up to you to make a decision on this card.  For me, he is simply too expensive for my squad… and I would be saying this even if I didn’t complete weekly reviews and need the coins.  Hoping you are safe and well.  Cheers for reading. 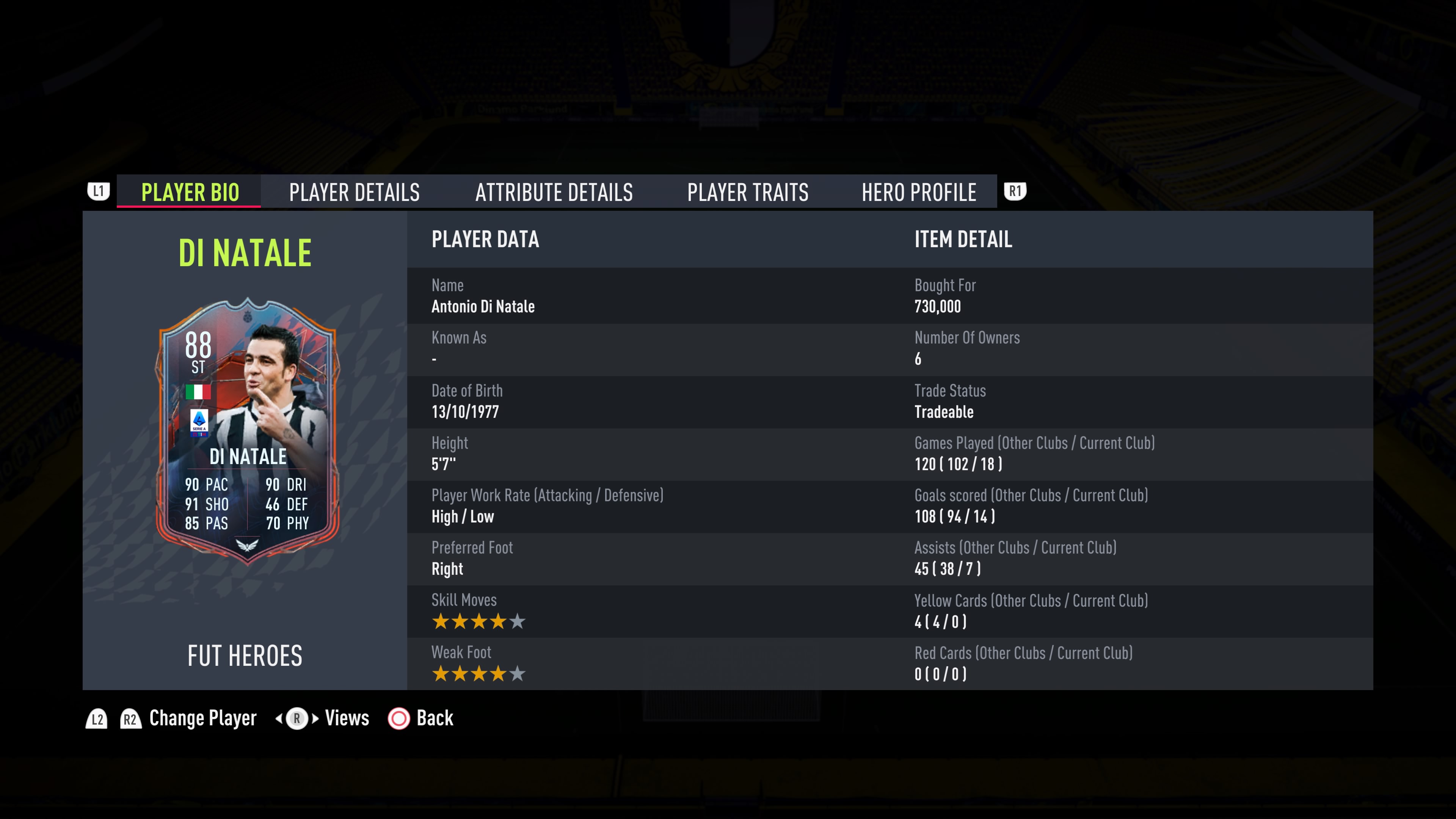 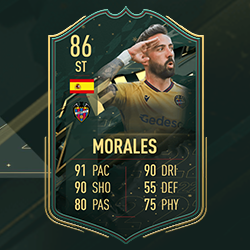