The Winter Wildcard review you have all been waiting for, none other than the lion himself, Zlatan Ibrahimovic … or at least that was the plan until the release of the Swedish big man came with an astronomical price tag.  Maybe we look at him next weekend if the price drops?  Would that still be of interest?  Let me know in the comments.  With the Milan Giant out of contention, we went for something a little bit different this weekend with a look at two Spanish strikers in very different price ranges.  While Prime Fernando Torres was always going to come with high expectations, I was not sure what to expect from Winter Wildcard Morales.  Normally a look at the price tag can provide an idea of where a player stands in the eyes of the community, but with values on the decline faster than Harry Kane it would have to be a try and find out situation.  The move back to a 4-2-2-2 formation allowed the Spaniard Showdown to commence and it would be the HAWK chemistry style propelling the Levante man into action.  With the squad set up it was time to dive into yet another Weekend League grind as Morales was the surprise performer all weekend long in the following squad: 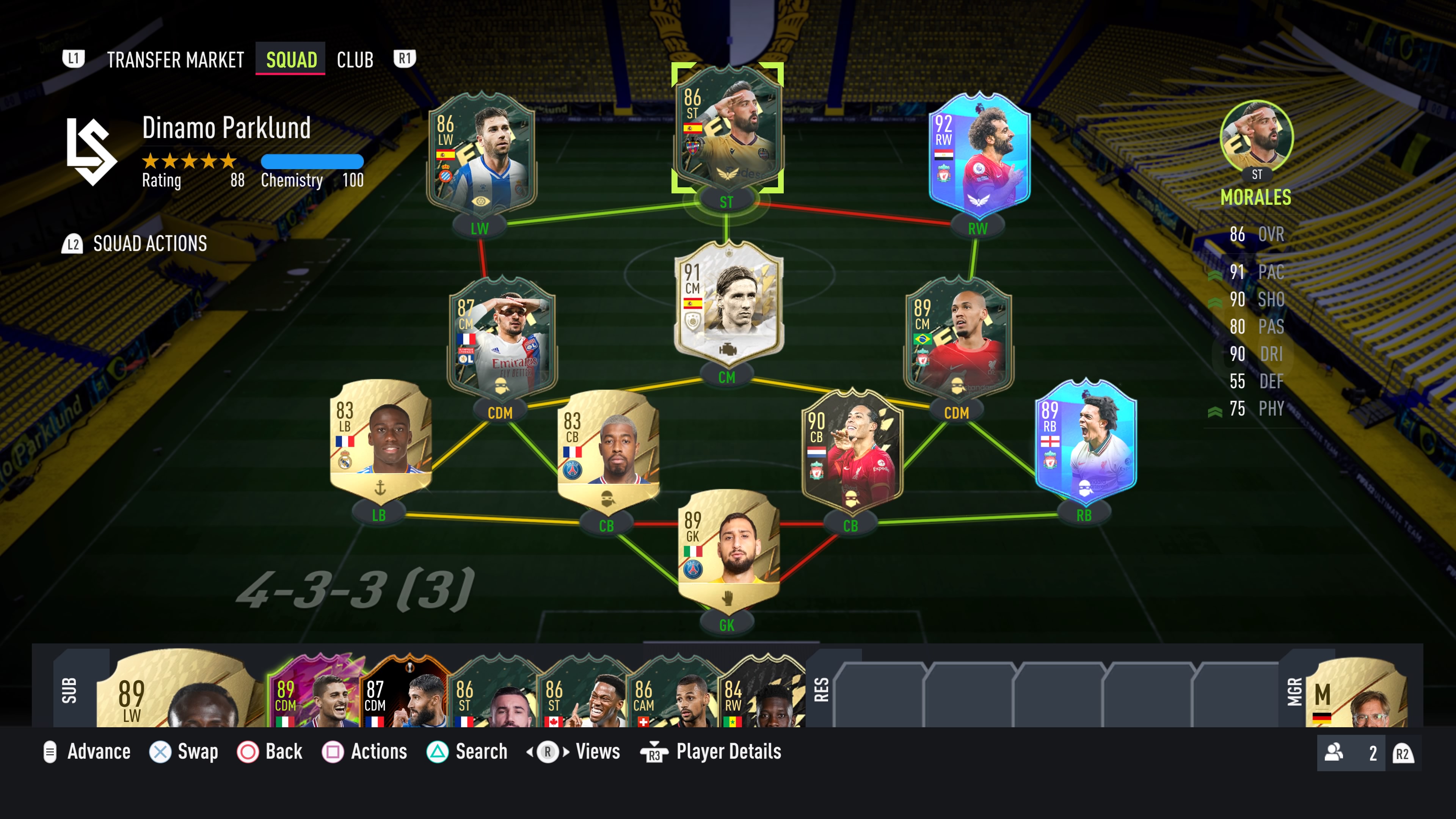 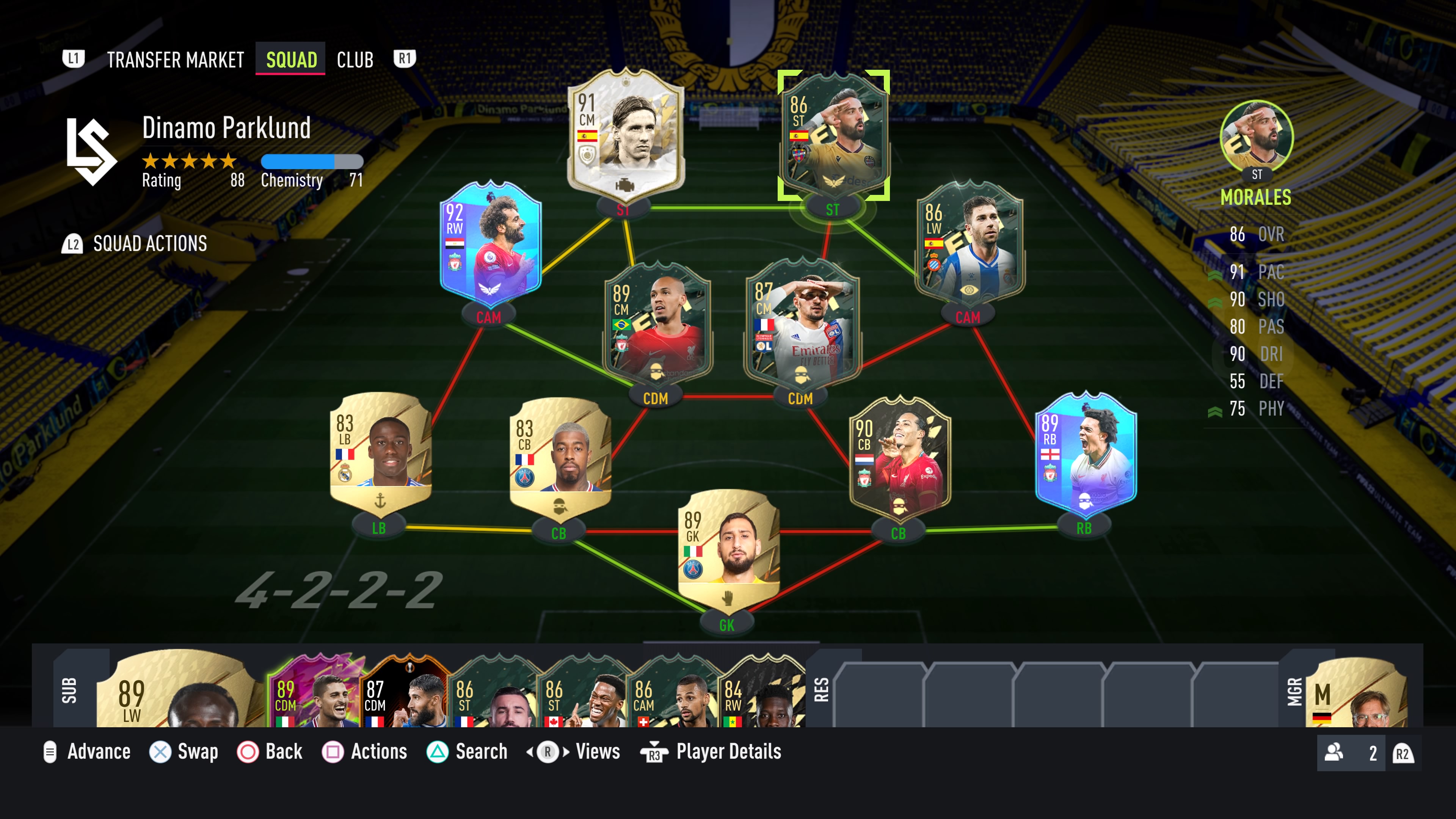 I have heard mixed reviews about this card while scrolling through Twitter comments and what everyone can agree on, myself included, is that this card has no business being 55k.  155k might be more appropriate and even then I would give this card a 5/5 in terms of Value/Coins… but at 55k this is simply a joke already.  Regardless of the price, there are certain areas where this card performs really well and others that I found wanting in key moments throughout the weekend.

I went with the HAWK chemistry style for a few reasons… Shooting and Physical are the key interests and in the end, I felt they both complemented this card perfectly.  I was incredibly impressed with the 4 STAR WEAK FOOT on this card as the 97 FINISHING, 98 LONG SHOTS & 99 SHOT POWER all performed consistently and accurately.  “So why only 6 goals if the shooting was so good?”  The key issue with this card was the movement, or lack thereof, in and around the box.  The 97 POSITIONING didn’t translate into the chance creation that I would have hoped for and in many circumstances, Morales would hide behind defenders making it difficult to get the ball.  For me, I don’t classify this as a Shooting problem despite the obvious placement in this category… instead, it is more in the nature of the card and doesn’t take away from how Morales took his chances when they fell to him.

This is one of those sections where one intricacy about a card has both positive and adverse effects on the overall card performance.  The 88 AGILITY and 90 BALANCE that has been heavily boosted from the NIF Morales card is quite nice to operate in tight spaces and you will see in one or two of the goals how it is possible to bamboozle defenders lunging in. However, once you get the Spaniard moving at pace those statistics largely melted away with a more rigid result.  Overall, the few sparkling moments were outweighed by the more frustrating, “if only he turned that corner quicker” moments and what remains is a 7.5/10 rating.  On the other hand, the size of Morales mixed with the 79 STRENGTH was noteworthy and added an excellent dimension to my squad when holding up the ball and in the air with his 80 JUMPING.

Too cheap.  While I have not jumped on the hype train that others are conducting with this card… there is an undeniable gulf between what this card should cost and how few coins he will set you back.

In all honesty, this category is the best way to describe this card overall.  There are so many qualities in Morales’ arsenal that a 55k card has no business having.  The 97 ACCELERATION & 96 SPRINT SPEED to name two and both ensure that Morales can literally keep up with the rest of the pack and the direction that the game is moving.  Yet, there were moments, such as key breakdowns in scoring opportunities because of the 82 SHORT PASSING, 75 LONG PASSING & 82 CROSSING that all left me happy I had not wasted a pile of coins on the Levante man.

As you can tell it was certainly a mixed bag with this card.  While I mentioned a 155k price tag would be more appropriate for how effective Morales is in-game… in the same breath, I think I would be telling you to steer clear for that price.  Overall, I think that is the key message here and part of what makes this card so special… for a starter squad you could do a lot lot worse than having Morales leading the line.  But for those of you with established squads, Morales is not an opportunity to replace your Flashback Benzema with a diamond in the rough.  But as a cheap super sub?  Absolutely.  In the end, I mentioned a small contest at the start of this review between two very contrasting cards in terms of price… and while Morales performed admirably… He couldn’t hold a candle to Torres and I am not tempted to keep him in my squad even for the ridiculously low price.  Hoping you all enjoyed your holidays.  Cheers for reading. 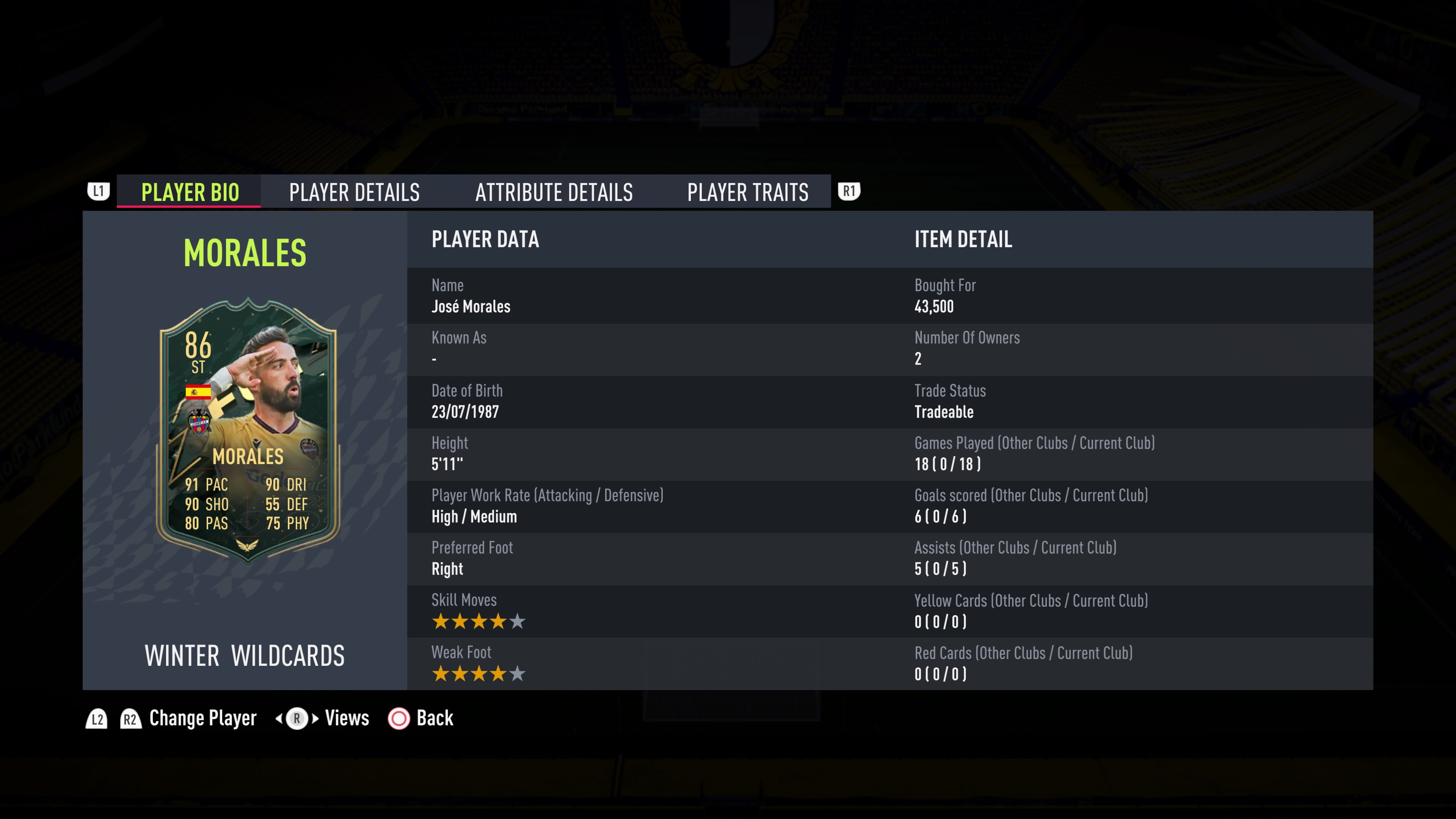