A strong result last week saw 17/23 predicted correctly and should that continue, we are in for a very weak side. I’m not sure I have seen a full fodder side before and thus we could easily see EA throw a surprise or two but going strictly off of performances the best names in TOTW 16 are Schmeichel, Aspas and Rodri, I did say it was bad. 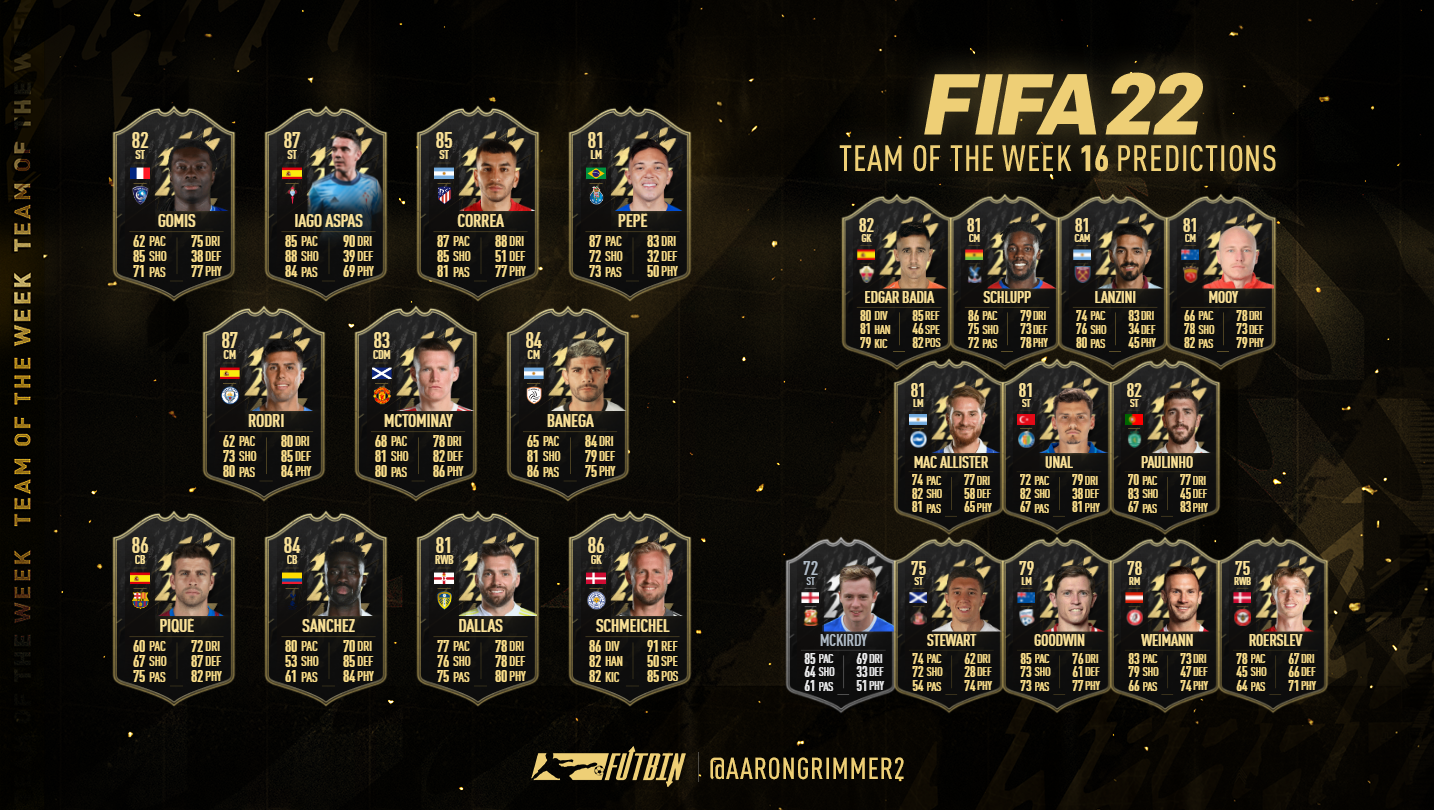 Kasper Schmeichel – GK - OVR 85>>86
Leicester City shocked Liverpool on Tuesday recording a 1-0 win over the title contenders, putting a major dent in their chances of lifting the title, with Man City now looking heavy favourites. Schmeichel played a huge role in the three points, saving a Salah penalty and making a total of four saves to deny Liverpool scoring. Sky awarded the Danish stopper an impressive 9 match rating which should see him cruise into the side.

Pique – CB - OVR 84>>86
Defenders were difficult to select this week and thus I have had to take a couple of punts. One of which is Pique. Barcelona battled their way to a narrow 1-0 win over Mallorca with De Jong scoring the only goal of the game. Pique however was a rock at the back, controlling the back lone and winning an impressive 7 aerial duels. Those who completed his showdown SBC will know just how good he can be in this game but this IF will not be close to that level.

Davinson Sanchez – CB - OVR 79>>84
It looked as though Bachmann was nailed on for a TOTW spot making save after save to deny Tottenham from breaking through but as is often the case in football seconds ended up changing the outcome of both the result and in turn the IF choice. A 96th-minute winner from Sanchez saw Tottenham pick up all three points and also makes him very likely to receive an IF. With the Colombian also only being 79 rated it makes him very likely to be the featured IF.

Stuart Dallas – RWB - OVR 75>>81
Leeds opted to go change up their formation this weekend and sway away from the 4-2-3-1. It worked well for them, recording a 3-1 win over Burnley and the adaptable Dallas thrived from it, being named MOTM after a strong performance topped off with a goal. With Firpo playing on the other side I am confident that this one will go down as a RWB from EA and if that is the case Dallas with definitely feature

Pepe – LM - OVR 77>>81
Liga Nos is currently in an intense battle at the top with both Porto and Sporting on a crazy 44 points after just 16 games, with both sides unbeaten and Sporting winning their last 12 matches while Porto is unbeaten in a ridiculous 44 matches. A 3-1 win over Benfica this weekend puts a seven-point gap between the leading two and third and should result in a Porto IF. There are numerous 50/50 options but with a lack of wide midfielders, I feel that Pepe is the best after scoring once and receiving the joint highest match rating of 8.

Scott Mctominay – CDM - OVR 80>>83
Ronaldo is likely to be a popular choice from United’s midweek win over Burnley however I feel as though Mctominay is the more likely candidate. Ronaldo often needs a stand out performance and with just a goal and assist against Burnley this is not that. Mctominay was also named MOTM for his goal and brilliant performance in the middle of the park.

Rodri – CDM - OVR 86>>87
Manchester City’s 2-1 win over Arsenal was perhaps overshadowed by some very debatable refereeing decisions. That being said it was still a huge win for league leaders in their hunt for the title. Rodri’s late winner saw them take all three points and although Saka was named MOTM the losing side is unlikely to gain recognition from EA and thus Rodri, who was the highest rated City player should be the man getting in

Ever Banega – CM - OVR 82>>84
Banega always ends up with a strong FIFA card by the end of the year, even while playing in the Saudi league last season he ended up at 91. His first IF of the year looks to be just around the corner after the Argentine scored once and assisted another to help Al-Shabab to a 4-3 away win over Al-Ahli.

Angel Correa – ST - OVR 83>>85
A recent promotion inclusion into the Versus promotion just makes this a difficult decision but with Correa scoring twice I simply can’t ignore him in a week like this and I feel that it will be the same for EA. Atletico Madrid recorded a 2-0 win at home to Vallecano to leapfrog them back into the champions league places.

Bafetimbi Gomis – ST - OVR 79>>82
Al-Hilal has been far less dominant than we have seen in previous years and currently sits down in fifth place. A Gomis brace helped them to their first win in five this weekend and as a result, the nostalgic Frenchman should be featuring in TOTW 16. Although unrelated Al-Nassr also picked up the win requirement for Talisca and thus another upgrade is on the way for him.

Iago Aspas – ST - OVR 84>>87
When it comes to high rated players there were next to none to choose from this weekend which does lead us towards a shockingly bad TOTW. Aspas may not even get in due to his teammate, Galan putting in a strong performance from LB which included 7 tackles. With Aspas scoring twice however I just couldn’t ignore the higher rated player.

Edgar Badia – GK - OVR 79>>82
Elche have struggled to pick up points so far this season and with them going down to 10 men in the 47th minute of the match it looked as though a similar outcome was going to occur. Badia had other ideas though and a string of saves helped them pick up what could be a vital point in the search for safety.

Jeffrey Schlupp – CM - OVR 75>>81
A nice positional change here and potentially even a featured upgrade just due to how good the card could be. I do think just a normal IF will happen should he make it however. Edouard scored once and assisted another two from LW but with a leaked SBC on the way for him, I highly doubt EA will include him, instead we go to Schlupp, of whom was actually named MOTM for his performance. The Ghanaian scored once and dominated the middle of the park as Palace recorded a 3-0 win over last placed Norwich.

Aaron Mooy – CM - OVR 77>>81
Oscar was snubbed last week which is slightly concerning for the CSL inclusions however I am willing to take another punt on the league this week with Aaron Mooy the Australian scored both goals for Shanghai as they recorded a 2-1 away win over Guangzhou City. If Mooy fails to be included on Wednesday, I would start to worry on the licensing side of things for the CSL going forward.

Manuel Lanzini – CAM - OVR 77>>81
Despite a late comeback attempt, West Ham managed to fend off Crystal Palace to win 3-2. Lanzini scored two of their three goals and was named Sky MOTM with an 8/10. Despite one of his goals coming from the penalty spot, I feel like the Argentine is still one of the strongest options this week

Alexis Mac Allister – LM - OVR 75>>81
It’s safe to say that Brighton against Everton was one of the more exciting fixtures this weekend, with five goals and a missed penalty seeing Brighton come narrowly out on top, 3-2. Braces from both Gordon and Mac Allister stood out but with the latter coming from the winning side alongside also being awarded MOTM it’s the Argentine that looks set for the IF.

Enes Unal – ST - OVR 75>>81
Real Madrid has been running away with the league recently but a shock 1-0 loss to Getafe will give bring them back to reality with the division far from over as it stands despite the point gap. A Getafe IF is inevitable but there is no clear-cut option. Soria is a fair shout after making four saves but I feel that the other keeper options are stronger and thus we look to the goal scorer in Unal, usually one goal won’t be enough for TOTW but on this occasion, there are gaps which need to be filled and thus Unal seems to be a good option.

Paulinho – ST - OVR 79>>82
EA has enjoyed including a lot of promotional players from the leagues which feature as squad foundations. There is no need for an excuse with Paulinho this week however after the striker bagged himself a hat trick during Sporting’s 3-2 win over Portimonense.

Mads Roerslev – RWB - OVR 66>>75
Early signs under Steven Gerrard have been positive for Aston Villa but a Brentford comeback saw the Bees take all three points from them on Sunday. Roerslev was involved in both Brentford goals with a goal and an assist and largely dependent on his position clarification is a strong candidate for TOTW 16. I feel as though he will be classed as a RWB though and if that is the case becomes very likely to be included.

Craig Goodwin – LM - OVR 73>>79
This would be the A-Leagues first IF of the game should it happen and with two goals and an assist from LM I would be surprised if it doesn’t. There are only a couple of non-hat trick spots available this week in the reserves however there are not many options to choose from and thus Goodwin’s performance really does stand out.

Andreas Weimann – RM - OVR 70>>78
The first of three English Lower League players I have predicted this week is Weimann the Austrian’s clinical finishing helped Bristol City to a 3-2 home win over Millwall, scoring all three of their goals from a RM position.

Ross Stewart – ST - OVR 65>>75
The majority of English Lower League fixtures were postponed due to covid this weekend and of those that were played very few offered IF options. An obvious one however was Ross Stewart, the Sunderland striker scored three of their five goals as they recorded a comfortable 5-0 win at home to Sheffield Wednesday.

Harry McKirdy – ST - OVR 62>>72
Continuing the theme of ELL players, we have McKirdy of whom managed to score an impressive four times to help Swindon towards a 5-2 home win over Northampton. Despite having less than a third of games played from what was originally scheduled we actually have more strong candidates than we would usually have.