SweatFest 2022 has come and gone and I hope that you had more success than I did.  This weekend was always going to be an astronomical challenge and it certainly didn’t disappoint on that level.  Sluggish gameplay, drop back tactics, 0-0 quits, and of course just really really good players challenging for one of the best rewards weekends to date.  If you earned your normal level of rewards or even surpassed it then I commend you on your focus and talent because it was a jungle out there. For me, I went into the weekend in extremely high spirits as I had some of my best pack luck prior to this Friday… Having grinded the SWAPS 3 Tokens I was able to open both the 85x20 and 84x20 with some excellent returns, most notably the star of this review in TOTS Min Son.  Truthfully this continued after the weekend as well with the addition of Red TOTS Salah (which means the club now says a sad goodbye to my 1000 game warrior POTM version).  In reality, I think Min Son would have always been the focus of this review, but getting the Tottenham man for free was a nice surprise.  The ENGINE chemistry style seemed like an immediate fit, but I could see arguments for the HAWK as well.  Against my better judgment I went for the more defensive 4-2-3-1 formation this weekend and it really just blew up in my face in the end.  Despite some excellent test runs in Elite Rivals it just didn’t work for me and was too late to salvage the weekend by the time I switched. However, one thing was clear, Min Son was lights out as both the central CAM and Striker in this formation and certainly gives me a lot to think about moving forward.  Sonny was certainly the small ray of sunshine in an otherwise dark weekend operating in the following squad: 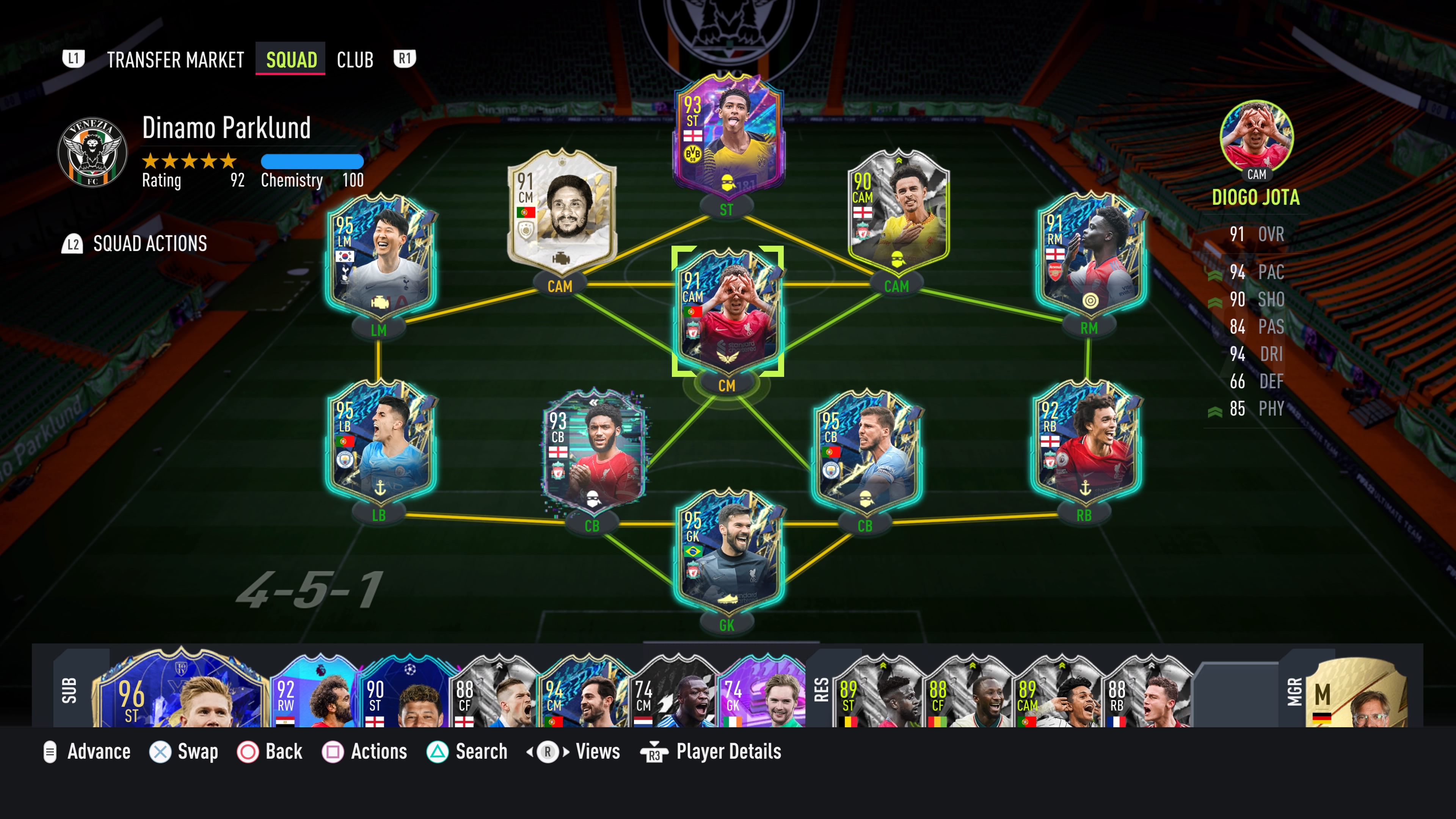 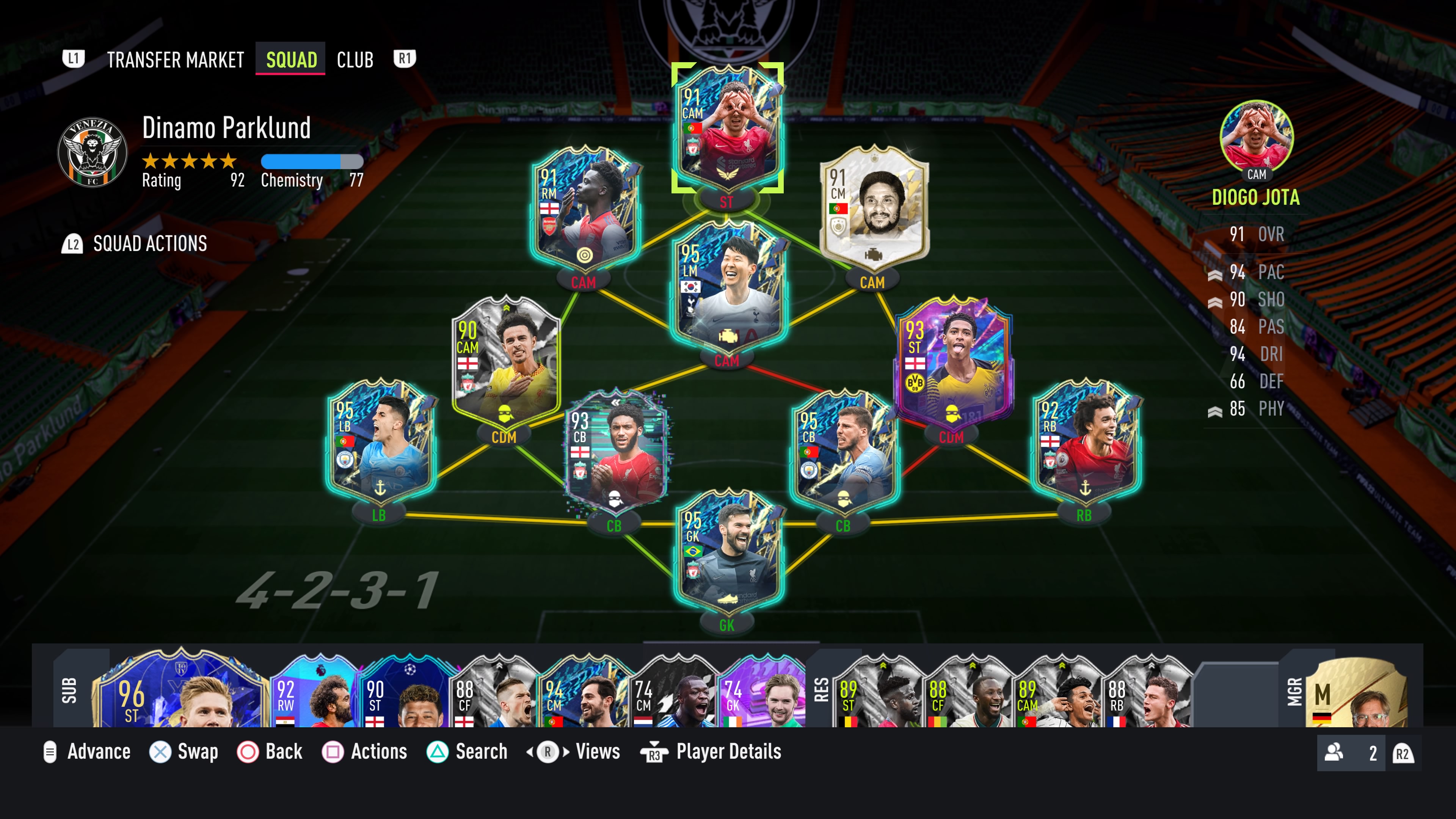 This card.  It never fails and Min Son cards rarely miss in FIFA.  In FIFA 22 however, it is worth noting that Min Son has not been quite the game breaker that he was in past versions.  You rarely saw NIF Min Son in early squads and I am not sure that I have even played one match against either of his TOTW or the Conference League version either.  It might be the dominance of cards like POTM Mbappe or perhaps the links, but it just doesn’t seem like many FUT Managers are making Min Son a priority.  But this might change things.  This card is next level and one of the most well rounded attackers I have used thus far.  The statistics are crazy, the price is reasonable, and the results are fantastic.

I realize that most are applying the HAWK chemistry style for the physical improvements. Still for me, they were already sufficient and the minuscule shooting boost is not worth it given how good this card performed during the weekend.  I am kicking myself as I write this again for going with the 4-2-3-1 and should have opted for a two striker formation to really get the most out of this card.  14 goals in 15 matches from CAM and a few minutes at Striker is an impressive return and speaks to the clinical nature of this card.  99 POSITIONING is maybe the most impressive “feeling” with this card as the Spurs man was constantly popping up in the right spots on the pitch.  However, what is being in the right spots without an end product? The 96 FINISHING, 96 SHOT POWER & 99 LONG SHOTS were phenomenal and there was zero difference on either foot thanks to the 5 STAR WEAK FOOT.  One small disappointment would be the 85 VOLLEYS (which again wouldn’t be fixed by the HAWK) as the two or three chances that fell to Son didn’t find the back of the net in key moments.

A card this size moving at this pace should never be able to turn and dance on the ball the way that Sonny can.  The unique body type and movements have always been a key to Min Son defying the normal effects of gravity on this size of card in FUT.  In truth, he almost seems smaller than he is on the screen, yet somehow harnesses his size when it comes to the 73 STRENGTH, which feels fantastic in game.  For those that might consider Son as a winger, the 99 STAMINA is a nice touch, while the 97 ACCELERATION & 99 SPRINT SPEED are palpable in game and create a ton of headaches for opponents.  I think I expected the speed and strength coming into this review and was only surprised by the effectiveness of the dribbling.  99 AGILITY, 99 BALANCE, 93 BALL CONTROL & 99 DRIBBLING all working in harmony to produce some excellent moments on the ball… the 4 STAR SKILLS are just the icing on the cake.

The cost of these TOTS cards is already a joke and certainly in line with the value of cards in this FIFA 22.  730k for this card is borderline unbelievable and I can’t speak highly enough about the value you are getting with this card.  If you just filter the base statistics for this card you get left with two other options… TOTS Salah for 2.5 million and PIM Pele for 5.6 million. The value is crazy and so is this card.

I said it already… I expected the pace, knew about the shooting, was surprised by the dribbling… but was absolutely blown away by the passing.  It was the discrepancy in passing that led me to a Min Son CAM and TOTS Jota Striker combination this weekend.  With 11 assists in 15 matches despite a mediocre Jota performance I was constantly caught off guard by the weight and quality of passing with Sonny and that is why the ENGINE is still the best choice in my mind.

Everytime I think a card is “simply too low” I get surprised more by the market in FIFA 22.  The best part is the affordability of cards of this quality… The worst part is how crazy the squads you come up against in every match throughout a weekend. Regardless of your thoughts on the market, compared to what is out there I think this card is incredible value.  With all of the ICONS floating around in squads I would say that the links are no longer an issue, but at this point, I can’t think of any other reason why you wouldn’t want to at least give this card a try throughout the week in Rivals and perhaps moving forward into the next installment of a TOTS Weekend League... he is that good.  Hoping you are safe and well.  Cheers for reading. 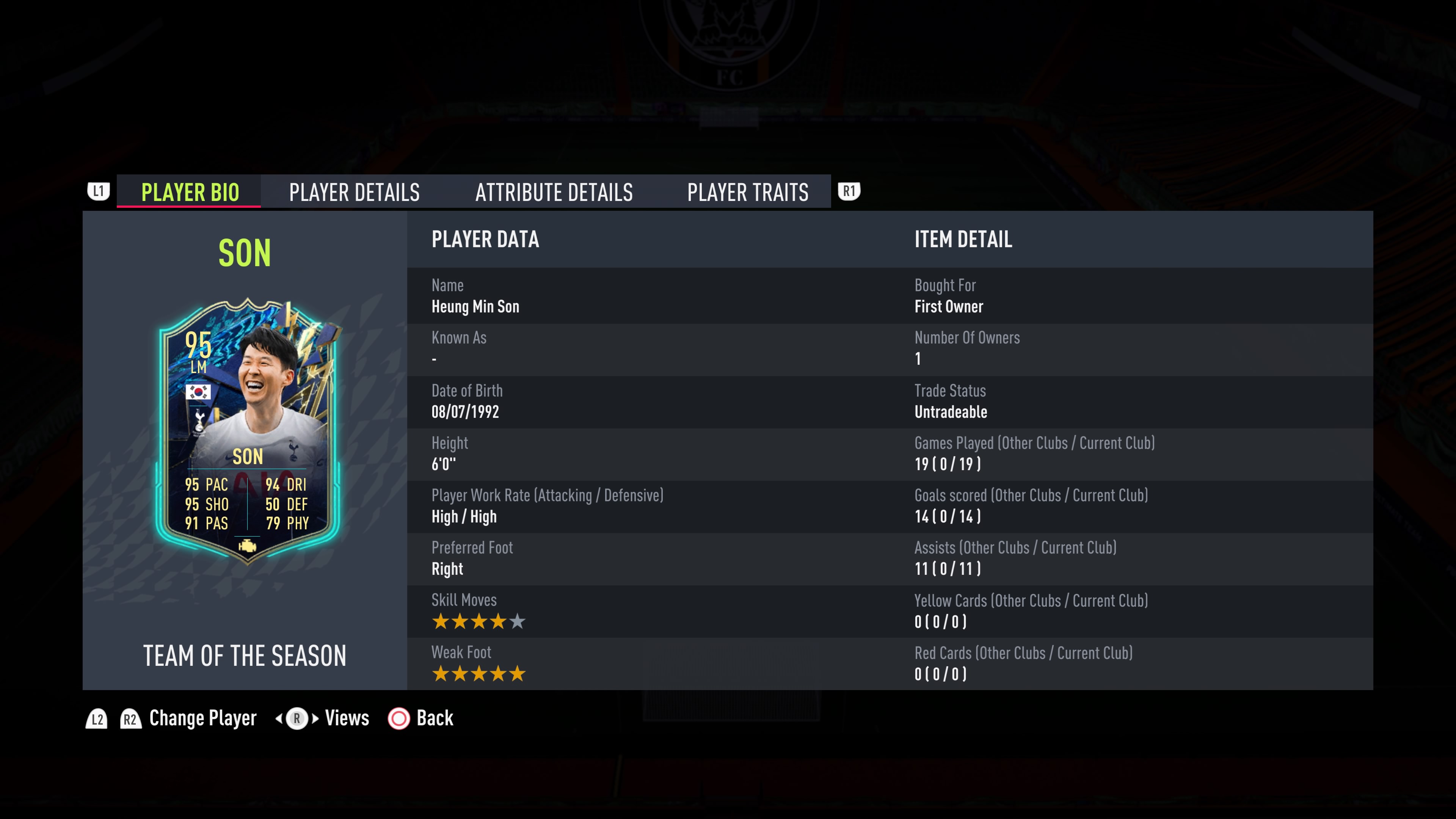