For those that know a bit about Alphonso Davies’ career, the nostalgia was tangible with the release of ShapeShifter Davies in the striker position.  During his final year for the Vancouver Whitecaps, Phonzie formed an intriguing partnership with Kei Kamara and showcased the promises of amazing things to come.  While his time as an attacker was largely cut short by his move to Bayern, the eye for goal has always been a weapon for Davies to deploy.  It is interesting that from a FUT perspective, I have read about numerous FUT Managers deploying ShapeShifter Davies at LB, allowing cards such as Cancelo and Marcelo to move central.  For me, this would have completely defeated the purpose of this review, and while I have no doubt it is an effective tactic, I was more interested in unleashing the Canadian at the opposite end of the pitch. Playing the 4-2-2-2 this weekend meant that Davies was able to take up the striker position alongside Aubameyang as the spearheads of my attack… which is how I started the first 45 minutes of each half.  However, with a need to get Insigne and Salah on the pitch, I would make subs for St. Juste and Kimmich at half time.  Insigne would move up top, Salah to LAM, Bellingham to ‘CDM’, with Davies dropping back into the box to box role.  I honestly don’t know if I could say which position I liked the Bayern man in more… As a striker he provided his fair share of goals, while as a CM he certainly impacted my attacking movements.  Regardless, I can say for certain that the MARKSMAN chemistry style worked wonders and truly got the most out of this card.  Davies was the jack of all trades all weekend long in the following squad: 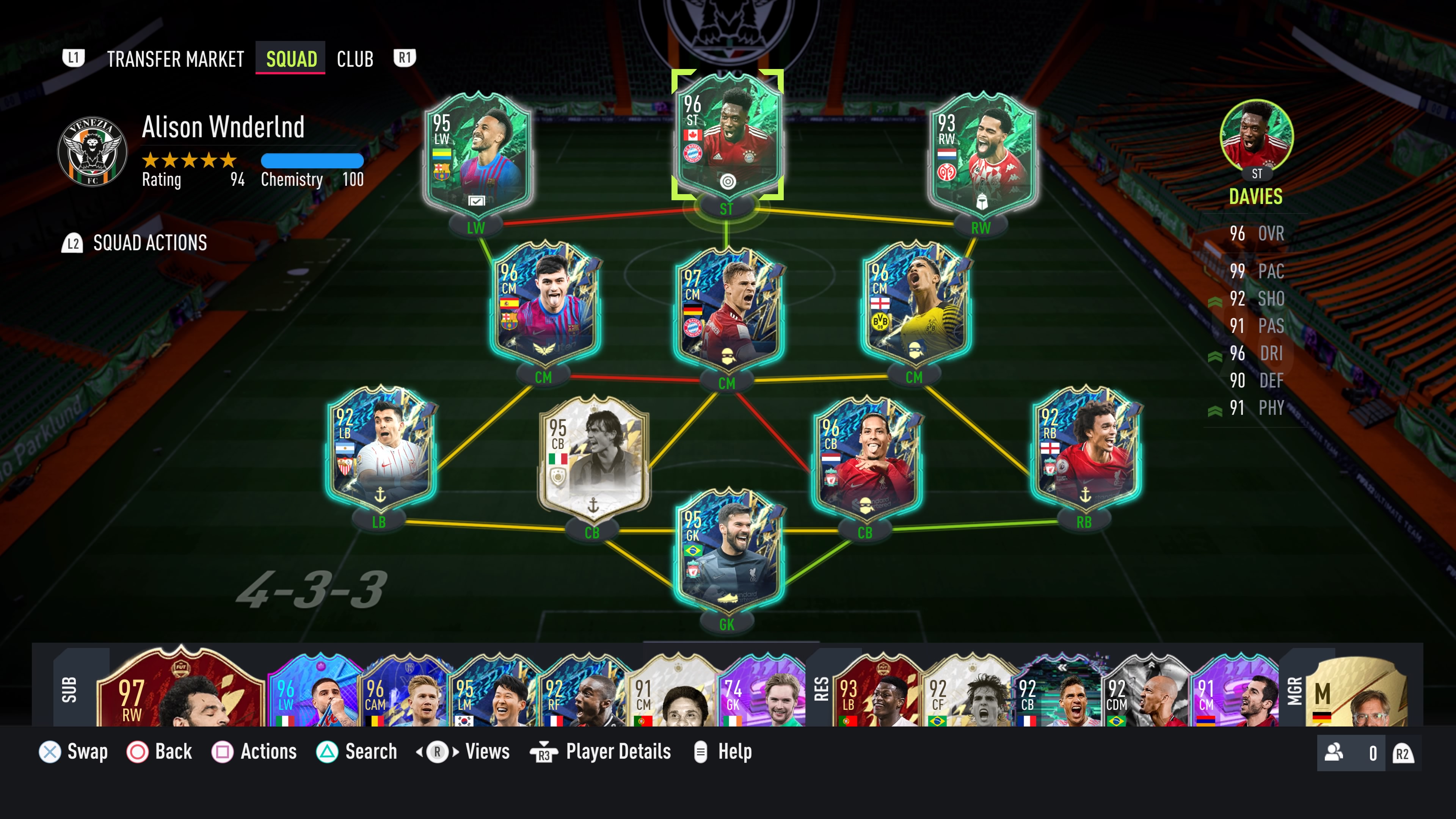 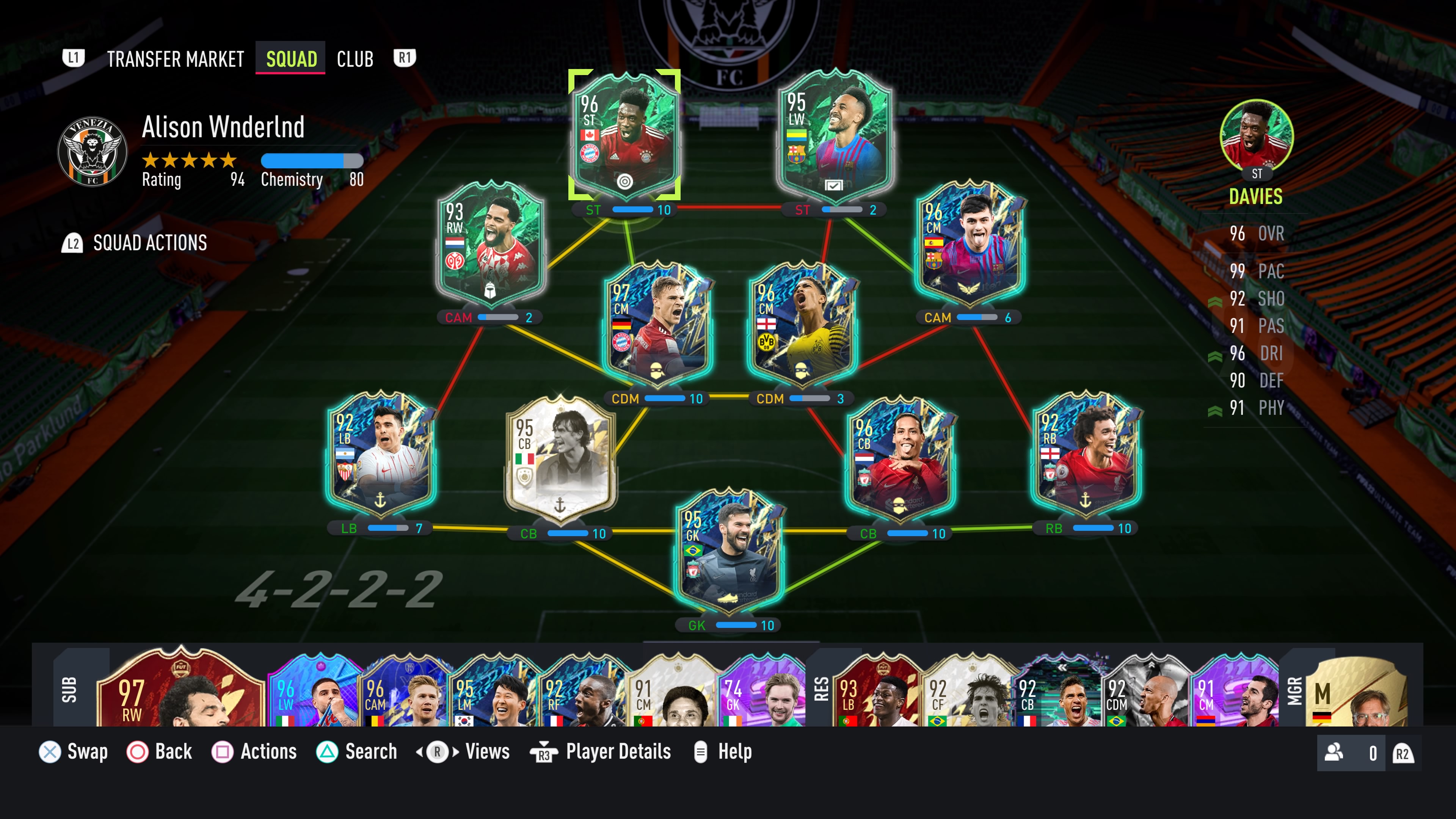 The .5 in ratings used to be something we did many moons ago in these reviews, but over time the feeling was that they were not as accurate as using whole numbers.  But in this case, I have to make an exception.  Davies is not to the level of our most recent 10/10 in Jude Bellingham, and there are a few factors keeping this from reality.  However, Davies is not a typical 9/10 card, specifically his ability to play so effectively in a variety of positions on the pitch.  Davies has the attacking prowess of a striker, the powerful running and constant presence of a midfielder, and as many managers have shown… The awareness and anticipation of a defender.

As an attacker, I was expecting Davies to deliver, with a slight undertone of, “I’ll believe it when I see it.”  There was no reason for me to doubt a 5 STAR WEAK FOOT attacker with 99 POSITIONING, 99 FINISHING, & 99 SHOT POWER… but I would be lying if I said I didn’t have a voice in the back of my mind spelling out disaster.  With 20 goals in 15 matches, it didn’t take long for all of my worries to wash away as Davies flooded the back of the net with a variety of goals.  Even more impressive is the fact that this total only includes 45 minutes per match as a striker.  If I had my time back I might have been more inclined to leave Davies at striker to see just how crazy his goal total could have been… Perhaps even challenging my Weekend League record this season.  The shooting was of course a key to this success, but without the dribbling, those shots would have been few and far between.  The 99 AGILITY, 96 BALANCE, 99 BALL CONTROL & 99 DRIBBLING all combine with the FLAIR trait and produce some serious magic on the ball.  The tall and slim body type lets you slingshot this card around the pitch and create the spaces you need to put his potent shooting to good use.

Having just pointed out that FUT Managers are deploying this card as a left back it is no surprise that the defending portion of Phonzie’s game was well above par.  Even with the MARKSMAN chemistry style applied there were zero concerns.  In truth, I was a little bit worried about the effect of the HIGH | LOW WORK RATE but overall felt that Davies was disciplined in following my Player Instructions while in game.  I do think I would be more inclined to use a GLADIATOR style if I was playing Davies primarily in the box to box role, but again, the 94 INTERCEPTIONS, 92 STANDING TACKLE & 95 SLIDING TACKLE performed just fine.  Mix in the card size and 97 STRENGTH and you have a hundred mile an hour wrecking ball patrolling the center of the pitch.

319k.  Nothing shocks me anymore with the price of cards… unless they are going up.  This card is no different and given how effective Davies can be anywhere on the pitch you are getting both a consistent performer and a fantastic asset for bargain bin prices.

Davies is simply a chameleon that can blend into any position in your squad, but with a lion-like presence.  You can point to the 5★/4★ … maybe the height … or even the unique body type … but for me, it all comes down to the pace and passing that come standard with this card.  99 ACCELERATION, 99 SPRINT SPEED & 99 SHORT PASSING, all without a single chemistry style application.  For one, they all perform 100% to the level that a card with those numbers should… and two, they allow you to pick appropriate chemistry styles for whichever position you decide is best for Davies in your particular squad.  They make everything tick and certainly bring out the quality in an already loaded card.

A special card, for a special player, in a special promo.  The ShapeShifter promo is not at the top of my list of favorites, but it is certainly a unique and enjoyable concept that always provides some intriguing options.  Davies is no different and the fact that almost every FUT Manager will have a slightly different position or role for Davies speaks to the quality of both the card and the content.  One criticism of FUT is that you always see similar cards and similar squads… and this promo, specifically this card, can challenge a lot of those status quo selections.  In my mind though, Davies should be played in those attacking positions that his ShapeShift would suggest… but if you are looking to unleash a wingback in other areas of the pitch, I know this card would be up for the defensive challenge.  Hoping you are safe and well.  Cheers for reading. 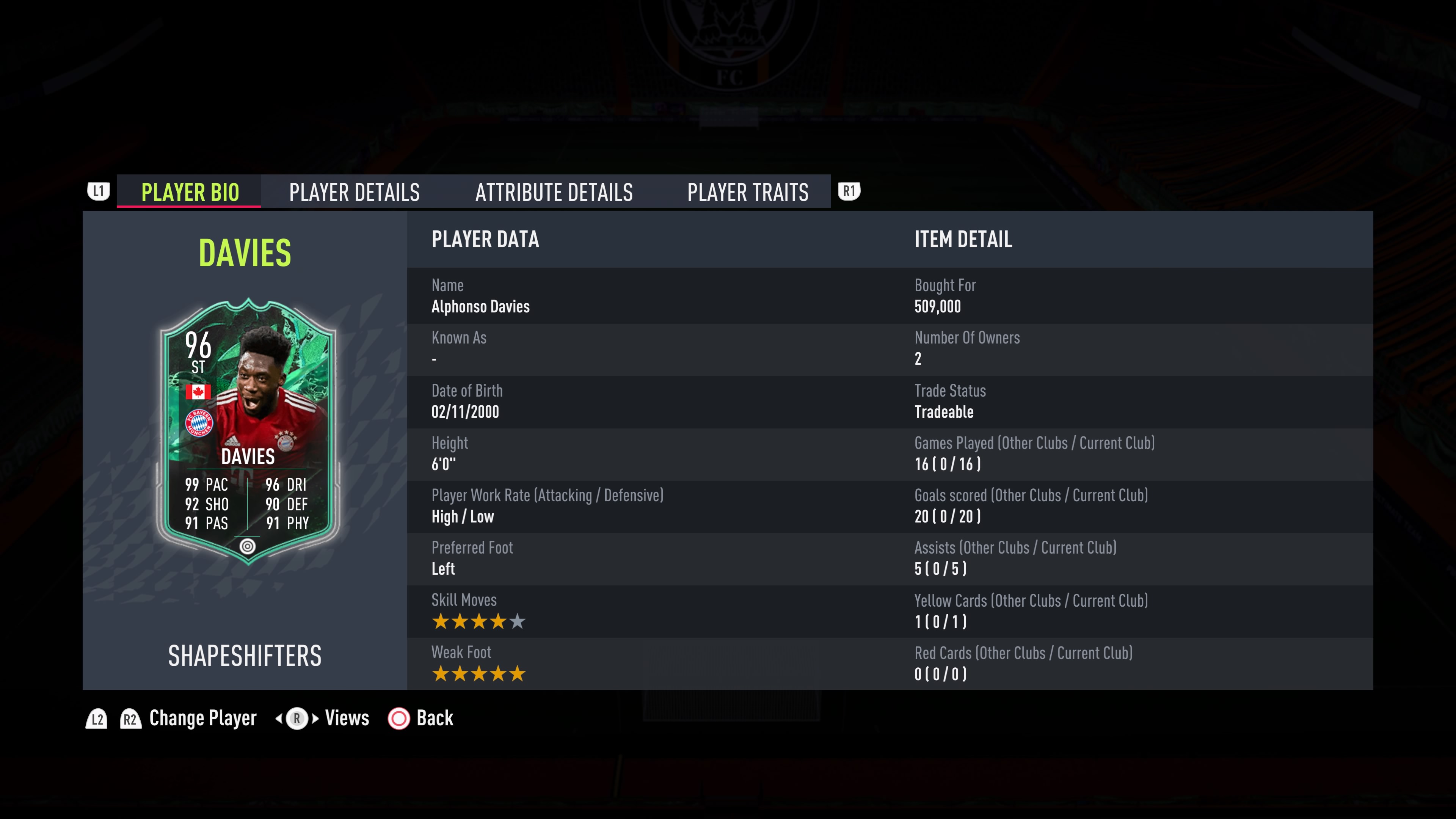 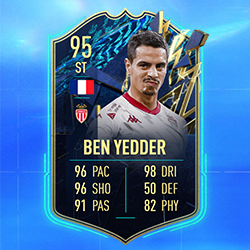 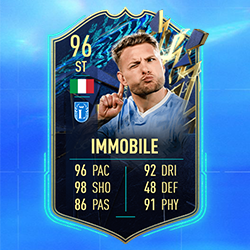 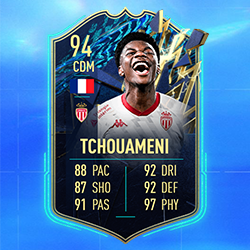 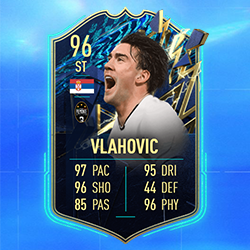 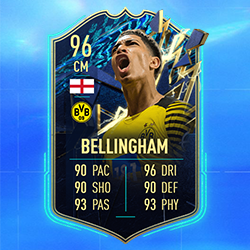