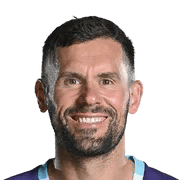 4.0
Testing the power of Traits
4 users liked this review

GKs this year are really hit or miss, but certain characteristics tend to make certain goalkeepers better than others. Height...Saving Acrobatic Shots...Long Throw.

Ive used Casteels for most of this year and have loved him, but after backing the cycling GK in a preview pack, i look at his card and saw his traits:

6'4, GK Long Throw, Comes for Crosses, Saves With Feet, and even Rushes Out Of Goal.

I pondered, what other GKs has the big 3 traits, and the only other one i could see was IF Bounou (who is terrible imo please don't use him for that Kounde link), so i took the Lance Armstrong of Hertfordshire for a spin off the bench and tested my theory, are traits more important than stats.

Context: Off the Bench in Div 2 Rank 1, which currently imo is on par with last seasons elite division skill level. GK's on sweeper instruction.

TL:DR; Good keeper overall and shows how powerful traits are, wouldn't use him over Pope/Alisson/Mendy ect. But Managerial masterpiece this man will save shots a lot of low rated GKs wont