DONYELL MALEN - ONES TO WATCH 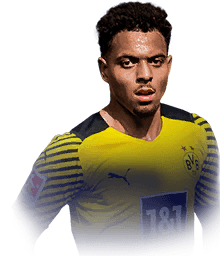 0
Red
Upcoming Matches
P. Chemistry
Squad chemistry
ST
84
RW
84
LW
84
CF
84
RF
84
LF
84
CAM
83
CM
75
RM
83
LM
83
CDM
59
CB
51
LB
58
LWB
62
RB
58
RWB
62
Reset
Basic
Sniper
Finisher
Deadeye
Marksman
Hawk
Artist
Architect
Powerhouse
Maestro
Engine
Sentinel
Guardian
Gladiator
Backbone
Anchor
Hunter
Catalyst
Shadow
Comments
Reviews
0
/600
Click here to verify your account in order to comment Update my avatar Dos and don'ts
Top Rated
New
Controversial
Show comments
Top Reviews
Only logged in users can submit a review
A review must be written in English
At least 200 characters are required.
Compare this player to other similar players you have used(optional).
If you import your club to FUTBIN or send us an image with the player data(fill the form below) your review will be marked as verified.
Include what you liked about the player in the pros area and what you disliked about the player in the cons area.
Your review will be manually checked during the next 24 hours.
Chem Style Used
Formations
Position
Rate Player Base Stats (1-10)
Pace
5
Shooting
5
Passing
5
Dribbling
5
Defending
5
Physicality
5
Most Used In:
Submit Review

Malen has been my favourite player ever since I got his first inform in FIFA 20, back when he was playing for PSV. I used to perfect link him to Bergwijn and what a duo that was...

This man is back now and better than ever, with this OTW, in my opinion, will definitely be upgraded as he may get an inform due to Haaland currently being injured and Dortmund being a very good team.

His link-up play with the surrounding players (OTW Boadu and OTW Depay) has been outstanding and the most notable characteristic for me.

His pace (with a hunter) has been unreal, with him outpacing basically anyone and his dribbling may not be the best but definitely very usable for me.

Overall, I think this card is one that is amazing overall with him being usable and could also be a good, risk-free investment.

Dribbling (can feel a little stiff at times)

Passing (can mess up passes occasionally; don't do extravagant passes with him)

(Sorry if my English is not the best, it´s not my main language)I absolutely love this card! I played 144 matches and scored 130 goals with him. He is the best Bundesliga striker in the game in my opinion. His shooting isn´t that great but with the right chem style he will score everything. Because of his pace and dribbling, i didn´t have much problems with the overpowered centre backs like Marquinhos? and Kimpembe. If you need a striker with much pace who doesn´t get stopped easily, then Malen is your man. With upgrades this card could be an absolute beast, so better get him now while he is still cheap