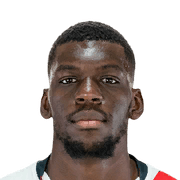 -
Sub out
Upcoming Matches
P. Chemistry
Squad chemistry
ST
81
RW
78
LW
78
CF
80
RF
80
LF
80
CAM
79
CM
78
RM
78
LM
78
CDM
76
CB
76
LB
74
LWB
74
RB
74
RWB
74
Reset
Basic
Sniper
Finisher
Deadeye
Marksman
Hawk
Artist
Architect
Powerhouse
Maestro
Engine
Sentinel
Guardian
Gladiator
Backbone
Anchor
Hunter
Catalyst
Shadow
Randy Nteka Objectives
Win 3
Win 3 matches in the Live FUT Friendly: Silver Lounge
Score 8
Score 8 goals in the Live FUT Friendly: Silver Lounge
Assist 6
Assist 6 goals in the Live FUT Friendly: Silver Lounge
Comments
Reviews
0
/600
Click here to verify your account in order to comment Update my avatar Dos and don'ts
Top Rated
New
Controversial
Show comments
Top Reviews
Only logged in users can submit a review
A review must be written in English
At least 200 characters are required.
Compare this player to other similar players you have used(optional).
If you import your club to FUTBIN or send us an image with the player data(fill the form below) your review will be marked as verified.
Include what you liked about the player in the pros area and what you disliked about the player in the cons area.
Your review will be manually checked during the next 24 hours.
Chem Style Used
Formations
Position
Rate Player Base Stats (1-10)
Pace
5
Shooting
5
Passing
5
Dribbling
5
Defending
5
Physicality
5
Most Used In:
Submit Review

This card is as perfect as it gets. He does everything amazingly in multiple positions and he’s so easy to get. I used him as a B2B CM in the elite division and he was dominating the midfield against Kante and Bruno easily. Probably the best free card you’ll get all year.

Strength - never gets bullied at all

Agility/Balance - so nimble for a 6’2, high and average build player

Passing - Barely misplaced a pass which is rare this fifa

I was planning to buy pogba for my team which formation is 4-2-2-2 for cdms then this guy came up. I said yeah I can give it a try. WHAT A TRY!!. He is like Etebo but better in every aspect.Played with him in div 3 for 10 match and he was mostly on point. He is good with Valverde next to him. Using him with stay back and cover centre instructions. Chemistry style is a little bit tricky. Tried powerhouse but felt so heavy used shadow bad passes now I am using engine he is very good but problems with defensive positioning. But for max 50 mins this card is a MUST DO!!PHY

PHY is definitely best I have used this year just bullies everyone near him.

PACE is not a problem at all he is a like tank with broken breaks.

Passing is not that good you should use chem style for boosting it.

Defending his def. positionining is trouble sometimes need chem style for it too.

Some random german guy, who play 99% of all players out of position.

First 5 games played him at CM next to Pogba. Pogba as creative part and Nteka as allround Monster! Feels very agile and strong. Then it comes to my mind that I have to try him as a centreback. And wow!!! This guy is next to Kimpembe and Mukiele ... 10/10. These 3 guys feel like the exact Player. All of them massive guys that are quick, strong and agile with no cons.

Never thought a f*cking Striker is that strong at centreback!

Some times he run into my other CB