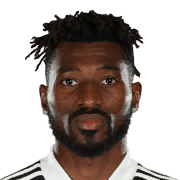 0
Red
Upcoming Matches
P. Chemistry
Squad chemistry
ST
78
RW
79
LW
79
CF
81
RF
81
LF
81
CAM
81
CM
82
RM
80
LM
80
CDM
82
CB
81
LB
79
LWB
79
RB
79
RWB
79
Reset
Basic
Sniper
Finisher
Deadeye
Marksman
Hawk
Artist
Architect
Powerhouse
Maestro
Engine
Sentinel
Guardian
Gladiator
Backbone
Anchor
Hunter
Catalyst
Shadow
Comments
Reviews
0
/600
Click here to verify your account in order to comment Update my avatar Dos and don'ts
Top Rated
New
Controversial
Show comments
Top Reviews
Only logged in users can submit a review
A review must be written in English
At least 200 characters are required.
Compare this player to other similar players you have used(optional).
If you import your club to FUTBIN or send us an image with the player data(fill the form below) your review will be marked as verified.
Include what you liked about the player in the pros area and what you disliked about the player in the cons area.
Your review will be manually checked during the next 24 hours.
Chem Style Used
Formations
Position
Rate Player Base Stats (1-10)
Pace
5
Shooting
5
Passing
5
Dribbling
5
Defending
5
Physicality
5
Most Used In:
Submit Review

As the new TOTW dropped, I was excited when I saw this card. Face stats look good for as early as we still are in FIFA. I decided to put him in a very generic Serie A squad and test him out in the 4-4-2 (2) as the left CDM, where I have been playing Zaniolo, as a box-to-box midfielder. I slapped a Catalyst on him because a shadow felt pointless with his workrates; he's never going to be good as an out-and-out CDM.

Pace: Quick enough to manually close down opposition. 92 with catalyst so this is expected.

Shooting: Can't say I get him into a ton of shooting situations but on the few shots I've taken with him? This is not a strong point.

Passing: Maybe it's the benefit of the Catalyst, but Zambo makes some obnoxiously good passes. Driven low passes and over the top through balls are on point; the lack of curve doesn't appear to be an issue.

Dribbling: It's fine. He's not Barella but he's not a bus when you try to control/L1 dribble. Good body type.

Defending: Manually he is fine, but the low defensive work rate DOES hurt him if you're not manually pulling him back.

Physicality: He's strong enough to push people off the ball and win headers, despite his low heading accuracy. Can shield ball effectively.

Passing: He can hit all of the passes you need from the centre of the park.

Shooting: He's just not good at it

Defending: Work rates matter and unless you're committing time to manually winning the ball, there are better options