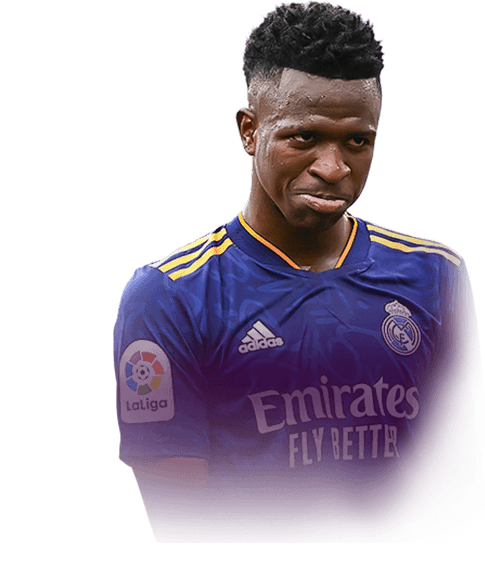 1
Sub out
Upcoming Matches
P. Chemistry
Squad chemistry
ST
87
RW
91
LW
91
CF
90
RF
90
LF
90
CAM
90
CM
82
RM
91
LM
91
CDM
64
CB
54
LB
63
LWB
68
RB
63
RWB
68
Reset
Basic
Sniper
Finisher
Deadeye
Marksman
Hawk
Artist
Architect
Powerhouse
Maestro
Engine
Sentinel
Guardian
Gladiator
Backbone
Anchor
Hunter
Catalyst
Shadow
Comments
Reviews
0
/600
Click here to verify your account in order to comment Update my avatar Dos and don'ts
Top Rated
New
Controversial
Show comments
Top Reviews
Only logged in users can submit a review
A review must be written in English
At least 200 characters are required.
Compare this player to other similar players you have used(optional).
If you import your club to FUTBIN or send us an image with the player data(fill the form below) your review will be marked as verified.
Include what you liked about the player in the pros area and what you disliked about the player in the cons area.
Your review will be manually checked during the next 24 hours.
Chem Style Used
Formations
Position
Rate Player Base Stats (1-10)
Pace
5
Shooting
5
Passing
5
Dribbling
5
Defending
5
Physicality
5
Most Used In:
Submit Review

5.0
Vini like winnie the badboy
18 users liked this review

Have mercy, this is my first review.

First and foremost, I was lucky enough to get Vinicius from an untradeable pack. I've been using this card in my squad ever since.

Vini has now completed over 100 games with me.

I play the ingame formation 4-2-2-2 and have played Vini on the left as well as on the front.

He's definitely playable in either position and a nightmare for defense. Although I prefer to play him as a striker with Deadeye chemistry.

If you don't have some mastery of dribbling, the card becomes difficult to play.

He reminds me a lot of Mbappe, although in my experience Vini is more agile than mbappe but a little worse in the end.

His short pass is awesome 98 with deadeye. As long he plays as a striker the long pass won't show up pretty often..

Outside the box: his right is a hammer, his left is not the best option with 4 stars, but depending on the situation you can also finish with the left.

Inside the box: just pull it off, right or left hardly matters.

The positioning is almost perfect, I play him without any instructions.

Pace and dribbling is clear of almost everyone else in the game. His dribbling is too strong in combination with his 99 acc, this sets him apart to players like neymar ww, who got exceptional dribbling as well, but not when you suddenly try to just run past players. His shooting is broken sometimes, especially his outside foot shot (why I play him right strker), just shoot and hope to glitch past the keeper. Apart from his pace, he doesn't play to his stats. Real stats are: 99 pac, 96 dri, 89 sho, 85 pas (it's really good actually), 80 Phy.

Shooting (outside foot shot is broken)

Meta but fun (other than mbappe)

Will most probably get an upgrade

Expensive, but value for money is good

Headliners Vini is quite good. There is no need to write too much about him. He can run though defensive lines if played as ST, on the wings he is also quite fast. Dribbling is very responsive and inputs are registered even on bad match making.

Warning: If there is another Vini in opponents team he gets boosted too. Really you ask? Yes I say. If the opponent has a Vini gold in Teamor on the bench or any of the thousands lower versions (TOTW or SBC verion) the game does not differentiate between both. (thats why I rate him 3 stars)

Therefore you should invest in another more unique player as a lot of users have the SBC version or any TOTW. There are people having his Gold just on the Bench in case you face this dude.

Very good if no other Vini is ingame

Too much versions exist nullifying his superiority