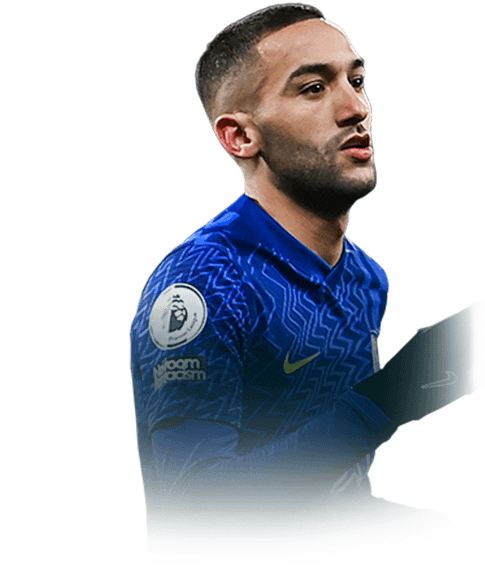 Hakim Ziyech's PLAYER MOMENTS card is rated 89, he is 181cm | 5'11" tall, left-footed Morocco winger (RW) that plays for Chelsea in Premier League with High/High work rates. His average user review rating is 4.7 out of 5 . He has 2-star weak foot and 5-star skill moves, giving him the ability to perform every skill move in the game. He does have a real face in-game. Hakim Ziyech has 2 special cards with ratings between 84 and 89. He was born on 19-03-1993 and he is now 29 years old.

First off, his passing is phenomenal.every cross-field ball and cross meet their intended target. His weak foot doesn't feel like a 2 star; he scored a banger for me outside the box on his right. His price is fantastic for the player that you get, and his agility and dribbling is so smooth and responsive. Get this one done if you can link him

I did Ziyech hoping to create a unique link between himself and Hakimi as I've not seen many do it. I was a bit skeptical about him a first for his 2* Weak Foot but if you have know how to use him correctly it's not a massive issue. I play him at CAM with Mbappe and Zaha infront of him with these two both being speedy and strong a clean through ball from Ziyech is amazing! Most the time when I try pass with other players they don't really seem to register what I'm asking where as Ziyech balls always go where I want. His Left Foot shooting is beast, his right however is a bit hit or miss he can either bang it in like nobody's business or sends it to ROW Z.

The one thing that really stands out for me is his Free Kicks and ball control, the accuracy is insane with the right amount of power 9/10 it goes in, and with his dribbling sometimes gameplay can make your players feel like the ball is made out of helium but with Ziyech the ball sticks to him and is so nice when you manage to execute a good skill move and finish with a goal.

Overall I would say he is a more juiced version of Gelson Martins. If you are in need to a new RW or CAM he is perfect, especially if you packed Red Kante last week this is a perfect time to get that link!

I'm currently using a fully untradeable team, and as an Ajax supporter Hakim Ziyech couldn't miss out. As soon as I saw the card I knew it was gonna be a sick winger cause of the 5* Skillmoves. The main thing that is currently stopping people from completing this card is his 2* weakfoot, but I can ensure u that you won't even notice his weakfoot as long as you play him as a winger/ram/lam. His shooting is very decent and his dribbling/passing is just exceptional. I've used baby best before I used Hakim, but I felt that he was lacking the e 5* skills. With this card releasing that problem is finally sorted and I no longer have to rage because I'm missing the 5* skills on the wing.

In my opinion, this card is definitely one of the best right wingers in the premier league at the moment. He feels very agile(can dribble the whole team like he's Ankara Messi). His passing ability is amazing, he can cross, he can long pass, he can short pass, he can rabona pass, any kind of pass always gets to the receiver, which confirms the 93 PAS. I suggest running him with a hunter, so he can outpace fast fullbacks(Davies, Mendy, etc.), but you can try the hawk chemstyle to boost physical. I found his hidden ability to score free kicks very interesting. I've also used Flashback Mahrez, but Ziyech is 4 parallel universes ahead.

There are not many things to say here except 2* weak foot, which would mean that your only option to score is by cutting inside and shooting with the left foot, BUT that is a lie if he has stamina, he scored some good goals with his right foot, but also missed some sitters. He is not that good on the center, so I suggest only playing on the right side so you can experience his best performance. Physical also causes him trouble, but as I said a hawk can fix that.

Have done quite a few SBCs this FIFA. I was more convinced with some, less with others. I know that Ziyech's price seems high, but with him you get at least twice as much back.

He's always in the right place on the wing, wins every sprint duel, EVERY CROSS is perfect (and that is not a lie) and his left-footed shots are also good. For me, the best player I have played in this position this year.

I had been thinking about getting ziyech for a while to replace gold salah, but was slightly worried about the 2* weak foot and low finishing, wondering if he'd be worth the extra 100k. He's 100% worth it. I played him at both RW and RAM and he worked brilliant at both. At RW i will admit it was slightly difficult to work opportunities sometimes, as i would be forced onto his right sometimes when i wanted to use his stronger left, but when i actually used his right it was always powerful and towards that bottom left, and when i didn't i could use his 5* skill moves to confuse the opponent and work it onto his left. In all honesty, his passing was slightly underwhelming. However, 'slightly underwhelming' for a player with 93 passing is still like having 90 passing, which is still fantastic. He's extremely responsive, and has more than enough pace to last at CAM, and enough for RW with a hawk or hunter. His finishing is pretty good, although you need to take power shots, even though he's the type of player you'd want to use finesse with due to the lack of finesse shot trait. Altogether he's a fantastic player for anyone who needs a prem-hakimi link or who just has a prem team.

2* weak foot (not horrible though)

Ok for someone who chops and changes there team everyday this card is a keeper. i have tried TOTGS vini, Prime zola, WW zaha, WW coutinho and now this ziyech card the this card is so clear the best one. i was worried about the 2 star but you barely notice it. the unique body type really makes the card. with a price of 180-210K it is a steal.

I've used him to qualify to the upcoming WL and played a couple of games on div rivals ( I'm div 1 ).

-The wf feels like 4* when he doesn't have low stamina

-When he has low stamina, you must use his good foot

-He gets pushed off the ball a handful of times