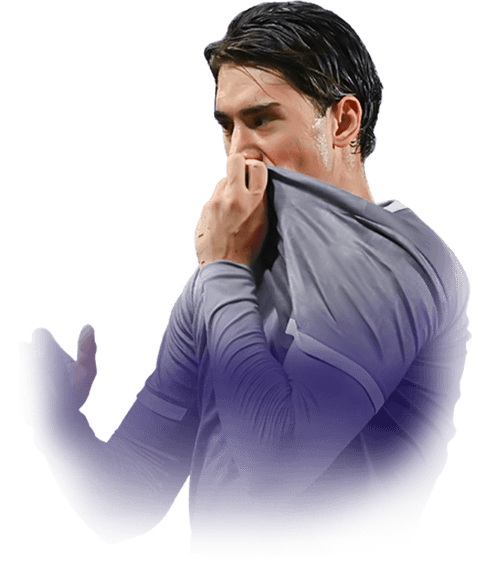 Dušan Vlahovic is starting to look less and less like a future star and more like a right now superstar as he has taken the beautiful game by storm the past two years.  It shouldn’t have come as a surprise to anyone that the now Juve man took literal minutes to open his account in Turin, feeling zero pressure after his record January transfer.  This weekend I was hoping that the Serbian could add that scoring touch to my club as I launched into yet another Weekend League grind.  On the surface, this card looked ridiculously good, but the 190cm | 6’3 frame was always a question mark regarding how the big man would operate in game.  I set off with the size factor in mind, applying an ENGINE chemistry style to help add some fluidity to his play.  After 5 matches I was about to bin this card as the frustration levels mounted as Vlahovic offered very few positive attributes, let alone the goals I needed.  It was in the 5th match that everything changed as I faced an opponent who absolutely dominated me with the same card I was struggling so greatly with (is there anything more humbling in FUT?) but with a HUNTER style applied.  The next match with a switch in chemistry styles was a night and day difference in quality and goal contributions.  From that point on Vlahovic led the line wonderfully in my newly instituted 4-1-2-1-2(2) formation. Vlahovic became the conveyor belt of goals all weekend long in the following squad: 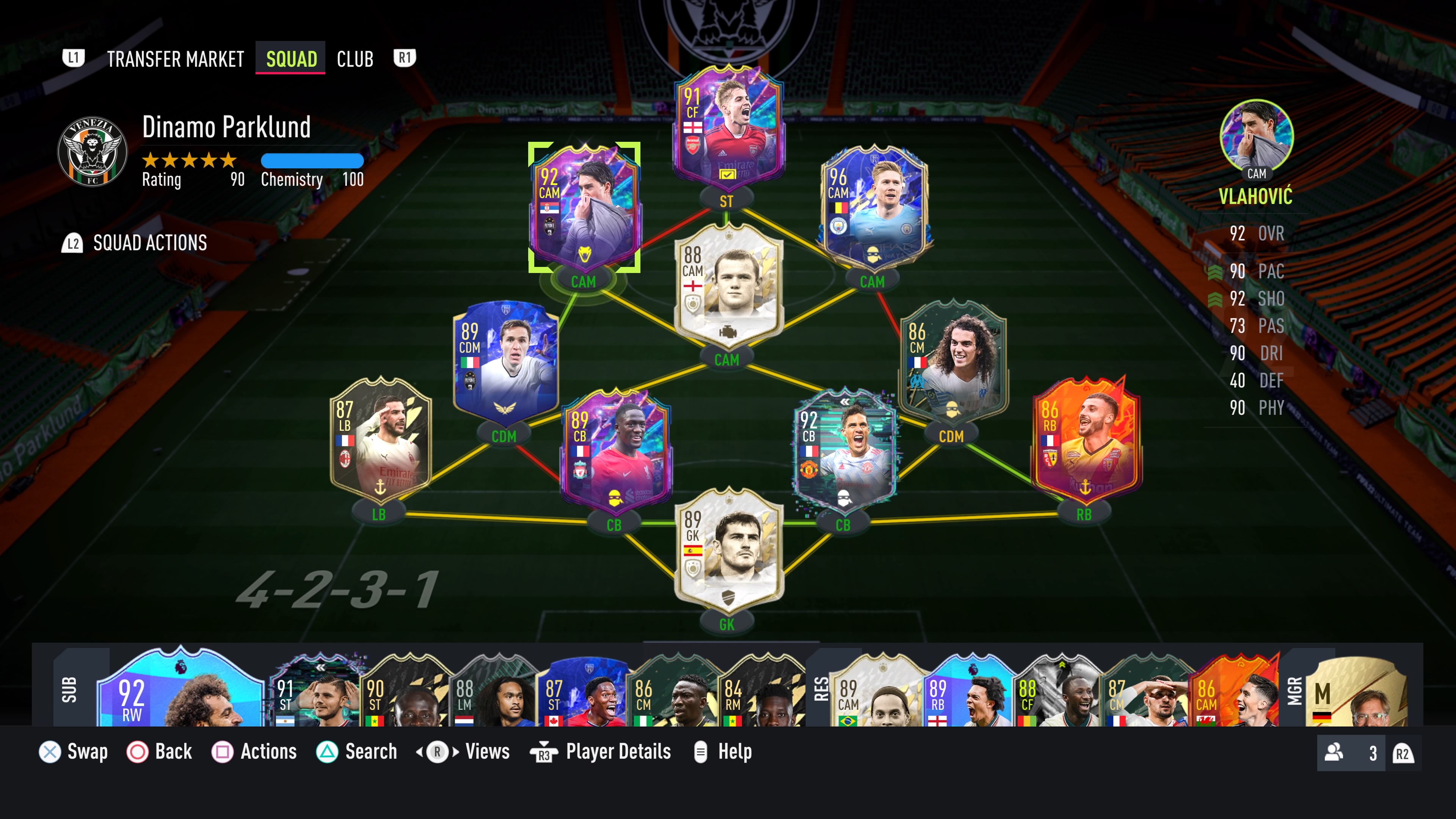 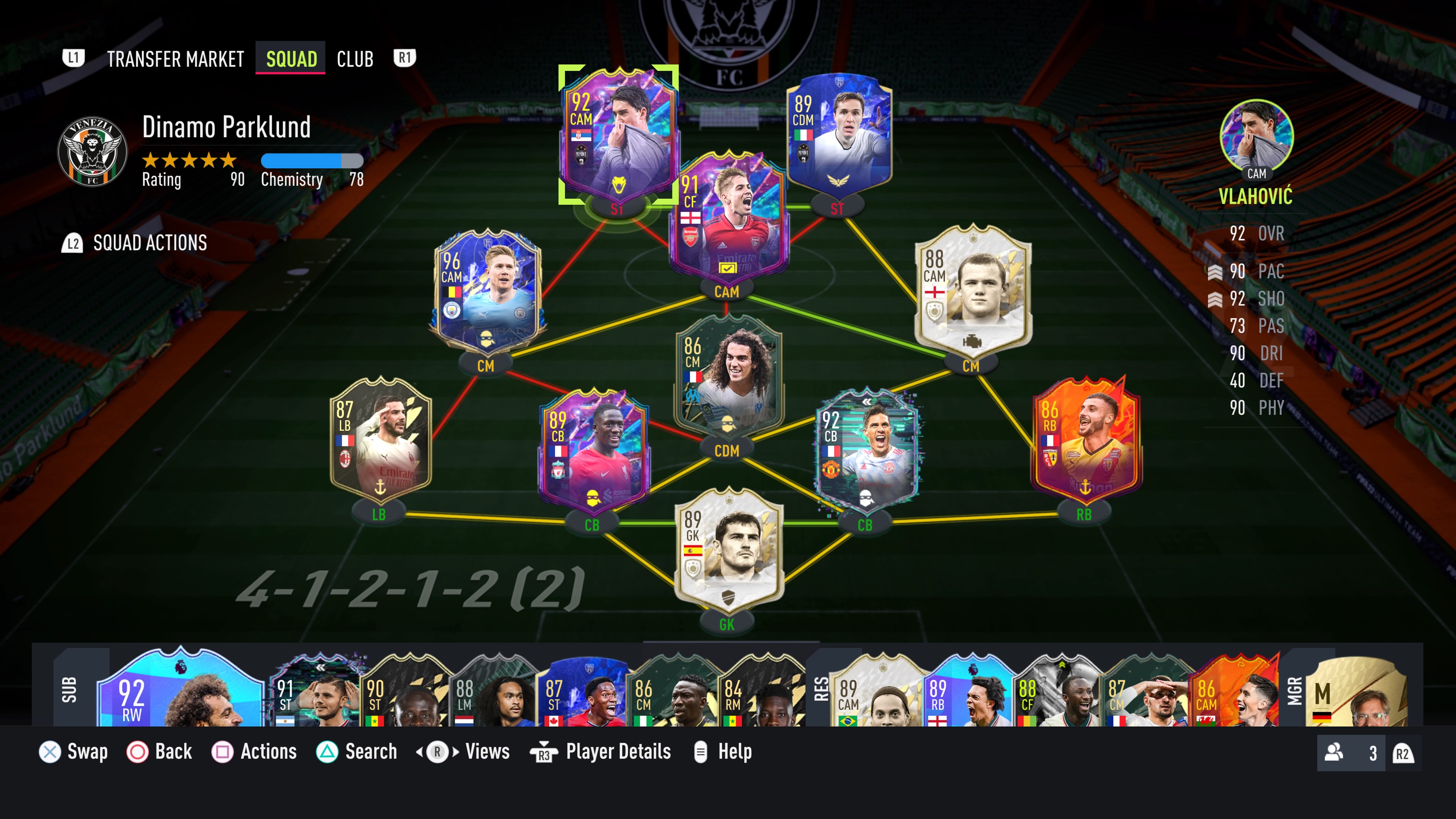 Difficult to rate this one considering the ridiculous goal scoring record mixed with some concerning elements that can’t be overlooked.  In the end, there are not many cards I have used that can hold a candle to the 25 goals in 15 matches Vlahovic produced… and that was with only 5 in the first 5 matches.  20 goals in 10 matches as the competition increased is a return that won’t be matched by many and it wasn’t just the total, but the way that the Serbian took his chances that has me so made up with his performance.

The name of this category about sums it up, Vlahovic is a traditional number 9 who is looking for goals and capable of delivering them against the toughest of opponents.  Another 16 - 4 weekend came largely off the back of this man’s contributions to the squad.  Prior to the application of the HUNTER chemistry style I was noticing a lack of true pace from the big man and was causing an issue where defenders were catching me up in areas, I would have thought a shot was imminent.  But the move to 98 ACCELERATION & 99 SPRINT SPEED was a massive injection of pace and caused defenders issues from then on.  After the pace was sorted the shooting came to the forefront as the 99 FINISHING and 97 SHOT POWER simply overpowered keepers throughout the weekend.  The only reason I didn’t go for the perfect 10/10 rating despite the high goal return is the 4 STAR WEAK FOOT which actually felt poor in game.  The saving grace, in this case, was how often Vlahovic would avoid his weak foot, which is highlighted early on in the video as he slices a left footed shot into the top bins.  Finally, the 93 STRENGTH on a card this size was a welcome addition as Vlahovic rode numerous challenges on his way to finding the sweet spots in and around the box throughout the weekend.

For a card of this size, I was incredibly impressed with the left stick dribbling response to inputs.  92 AGILITY, 90 BALANCE, 90 BALL CONTROL & 89 DRIBBLING are not poor statistics by any means and maybe it shouldn’t have been such a big surprise.  But my experience in FIFA 22 with bigger strikers has been generally poor due to a clunky feeling in those tight areas of the pitch.  Vlahovic brought a sneaky bit of class on the ball that I often felt my opponents were not expecting either and certainly opened up a lot of opportunities for attempts on goal.

The TOTY hangover seems to have affected the Future Star prices… either that or I am missing something regarding their quality.  For me Vlahovic is a steal at 550k and a comparison of the other cards with 90+ Base Rating in Pace, Shooting, Dribbling and Physical lays this out perfectly.  The closest in price is TOTY Lewandowski at 890k and truth be told I far preferred Vlahovic over Lewa myself… which I realize isn’t the most popular opinion.

Sometimes the stats simply don’t lie and with Vlahovic this couldn’t be more true.  The 25 goals more than outline just how amazing he was in front of goal… while the 1 lone assist outlines just how pitiful the passing could be with this card at times. In fairness, I adopted a shoot first mentality with Vlahovic very early in the review as the results continued to add up, but even in the build up play it was frustrating at times when passes simply went astray without cause. With 85 SHORT PASSING & 65 LONG PASSING, it is safe to say that Vlahovic comes by his poor passing honestly and perhaps with more time it might just be that a CATALYST is the ultimate play, but even with an ENGINE it was not much improved.

The Future Stars are always one of my favorite promos of the year and this year certainly hasn’t disappointed with some of the players currently available.  With Team 2 on the way this can only grow and bring a new crop of interesting options for those extra team building pieces.  With Vlahovic it is a simple summary in the end… the card scores goals, lots of goals.  I wish I had the opportunity for another weekend with the now Juve man as I just got the hang of the card too late to really challenge my previous Weekend League goal scoring record.  For me, this card is as lethal as they come and if you can fandangle his slightly challenging links into your squad I don’t think many would be disappointed.  Hoping you are well. Cheers for reading. 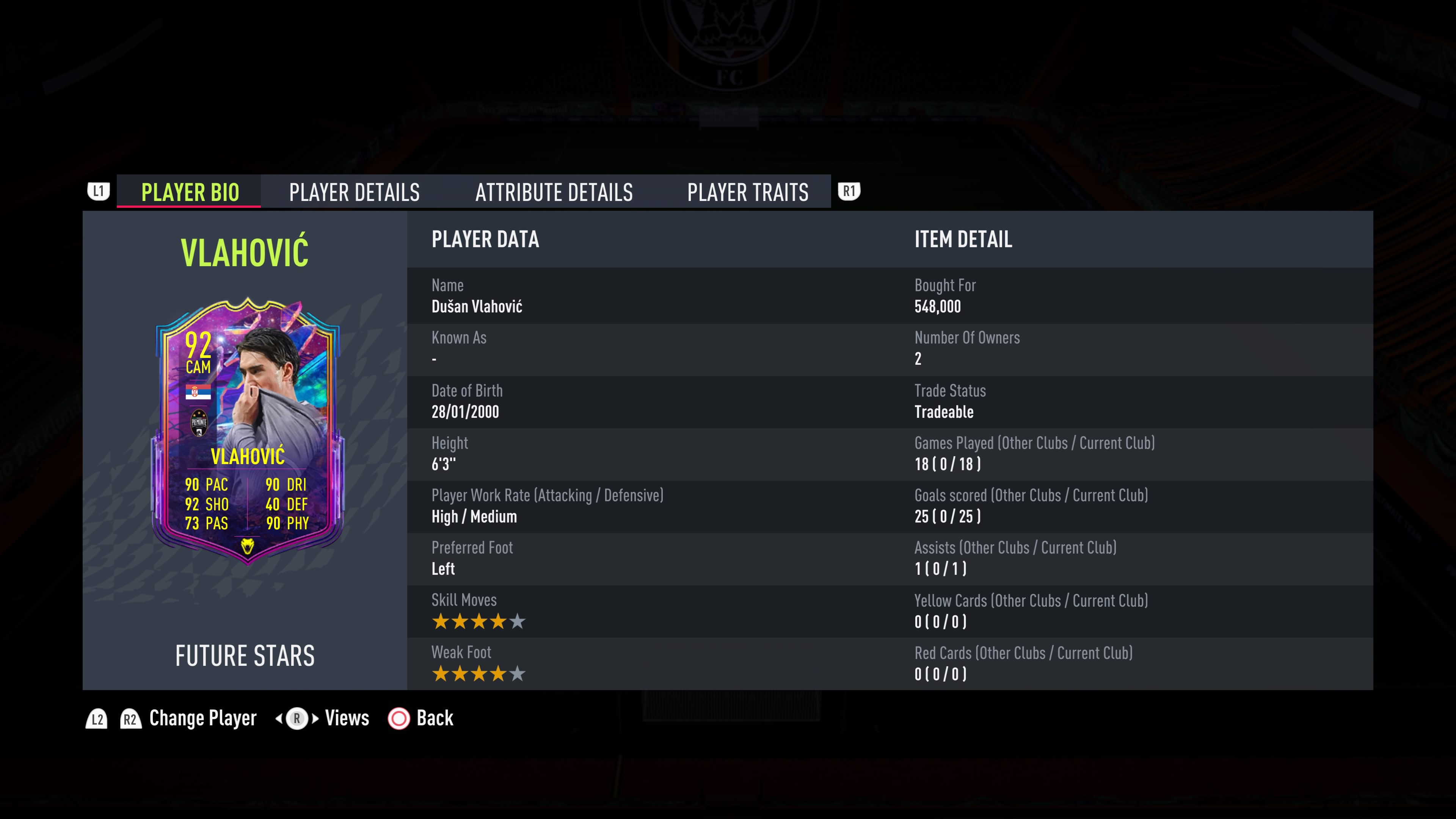 It makes itself dangerous in any situation

If he loses the ball, he recovers it in an instant

I sold my team for some reason and didn't have any excitment for this WL, so i decided to try something new and this is the point where i found Vlahovic. Using him in 4-1-2-1-2 (2) alongside Best and Nedved in Cam made my best result in WL so far. I am a casual player and never aimed for the top but i had a shot at 14 wins this time thanks to Vlahovic. I lost the last match but didnt stress out whole time due to the fun Vlahovic did! If you are not a skill dribbling maniac this guy is your MAN! Just give a through pass to him and shoot around the Box, its that simple... Buying him at 550K was a solid deal for me.

Strength - Bodies away many defenders and can retrive lost balls

Heading - All corners are potential goals

Pace - When he reaches top speed nobody catch him

Agility - Sometimes feels slow with the ball if you change direction

He might not be that kind of meta striker, but let me tell you, he is a BEAST.

I have tried Mbappe before him, and decided to try something new, so I decided to go for this new Vlahovic, and wow, I can say myself, he is much better than mbappe, might feel heavier tho, but his shots are amazing, his strenght to go past defenders, and even sometimes steal the ball from them, is INSANE. He is also really good winning high passes, and his speed feels better due to his long legs.

I would definitely give him a go if you can fit him in your squad, i dont like these kind of strikers, but he has left me speechless, he is not leaving my squad soon, thats for sure.

Not expensive considering how good he is

Not the best links

Kinda heavy (Not much tho)